Answer (Part 1): How can you search all the coasts?

So... This IS tricky.
So I'm just going to answer the second part of last week's Challenge. We'll get to the "how to search the coastline" later. (As I kind of suspected, it's one of those questions that requires a bit more work than usual. Maybe we should start a new category of Challenges: "Makes you think differently about data," or something similar.
But let's talk about Challenge #2 for today. Remember? It was this:
2. The first picture above shows a stretch of the California coastline not far from where I live. It's a region called "Devil's Slide" which has a tunnel running through a piece of the coastline that perpetually falls into the sea, usually taking the road with it, hence the name. The Challenge is to identify the building that's near the southern exit of the tunnel. This is what it looks like now. Challenge: WHAT was that building originally? Who built it, and when?
Here's what it looks like now. 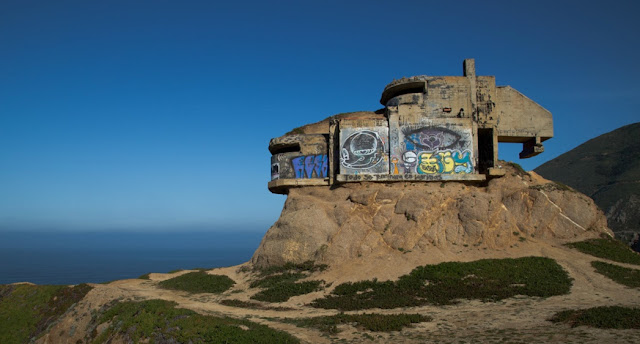 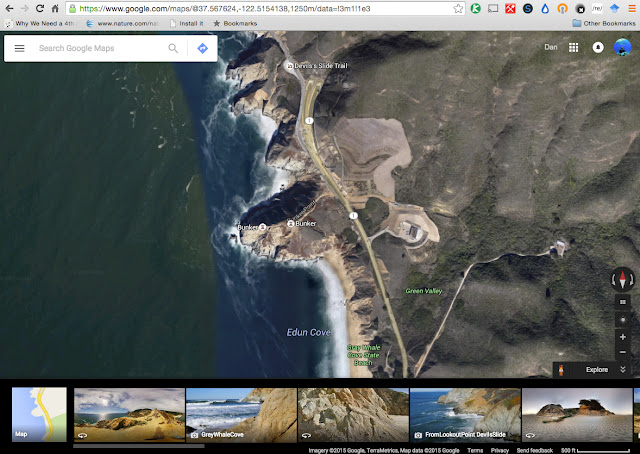 Dropping the lat/long (from Wikipedia article) brings you to this location on Maps. Note the two "bunker" locations in mid-image. If you click on the image on the far left in the image strip (at bottom), you'll see that there's a Photosphere there, so you too can zoom in on the old bunker. See image below... 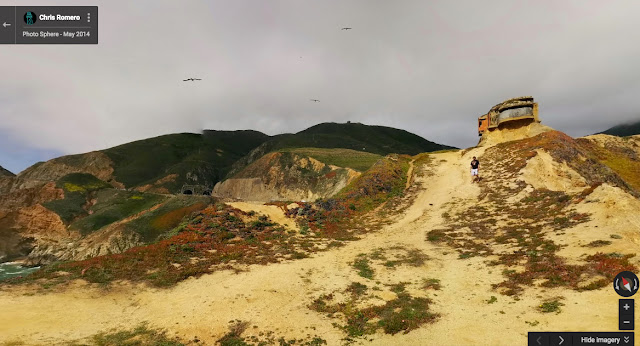 Rosemary noticed that the pictures were called bunker1.jpg, bunker2.jpg... so that was a big clue. (That'll teach me to give my pictures less useful names!)
The Wikipedia article about the Devil's Slide also has a Military History section. There were 6 such structures built in World-War 2 as triangulation stations to direct fire from the big guns farther to the north. (More on those another day. They're very fun to explore.)
As Ramon pointed out, a query for [ Devil's Slide history ] reveals a great deal including some early photos of the railroad tracks (which predated the road) being buried by landslides... hence the name. It's a naturally unstable bit of geology, even though this particular bit is hanging on tightly.
The bunker on Devil's Peak was originally built during World War II as a "Triangulation and Observing station." It was part of a larger complex of buildings, including a nearby generator hut. When in service, a watcher equipped with a set of binoculars would keep watch out at sea and if they spotted any enemy ships they just would phone in the heading to the big battery a few miles to the north. With the advent of more modern missile defenses the station became obsolete and the entire site was abandoned in 1949, leaving just this empty bunker atop Devil's Slide.
The land was eventually purchased by a private owner but the bunker remained. The earth around the top of the peak was removed for a construction project sometime before 1970. The project was never quite completed, leaving this remarkable fragment of history in place.
When I was originally researching this, I ALSO found a set of blueprints to the station. (Really! They're still marked "secret" and everything!)
For people who love this kind of sleuthing, I'll leave it to you to seek them out. They're really pretty interesting to read.

There are at least a couple of lessons to draw from this Challenge.
1. Some Challenges are actually fairly tricky! This is definitely the case with the "find a stretch of coastline" Challenge. I'm pretty sure I know how to do it, but I haven't yet found a reasonable way to do it... and I'm still searching for that. I'll give an update later this week.
2. Sometimes simple searches work. In the "bunker" case, the simple searches really do work pretty well. In this case, a quick search plus a couple of links got us there.
3. However, another lesson is that one should take better notes. I can't believe I lost track of the blueprints to the bunker. I'm sure I can find them again, but 15 minutes didn't get me back to them! (I'll update you on this when I find them once more...)
Search on! (I am, I am!)