Dan Russell • June 5, 2017
SearchReSearch
Republished with permission from SearchReSearch
Answer: Nautical mysteries? Dan Russell
Odd stories: How can you verify / follow-up?
That's really the question this week--when someone tells you something odd, how can you (quickly) follow-up and check out the veracity ("truthiness") of their claim?
Here are the slightly whacky claims I heard this past week. In each case, what's going on? True.... or not?

1. I keep reading about people going whale watching in Lake Superior. Can I really see whales in Superior?? (It is, after all, a great lake. Could whales possibly live there?)

Let's start with the obvious query:

You'll get something that looks like this. (I added the red numbers, obviously.) 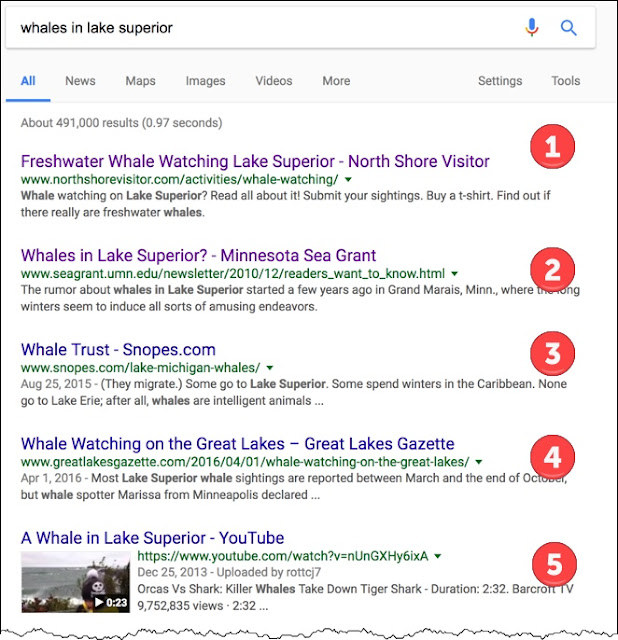 Let's look at each of these results.

#1 looks like the real thing. Not only does it look like there are whales in Lake Superior, but there's even a whalewatching tour boat industry. You can even buy a t-shirt! But let's click on that link. Here's what that landing page looks like when you click on the link (note that I trimmed the logo off the top in order to have space to fit this all in).

This ALSO looks pretty good. There's a place for reported whale sightings, and a list of past sightings. AND there's even what looks to be a whale's tail flukes coming up out of the water. 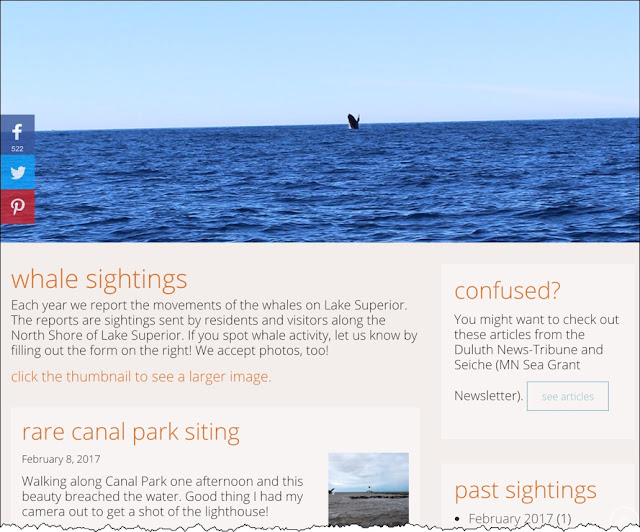 What wait a second. If you click on the "confused" link (on the right), it takes you to a page (which happens to be #2 above) where they admit that this is all a giant hoax for fun. Whales don't live in fresh water...

Despite finding whale fossils near the shores of Lake Michigan (#4 above), those fossilized bones are from quite a while ago when things were... different.

And of course when you look at the Snopes.com article (which happens to be about Lake Michigan, but it's the same story), they also debunk the claim. It was a rumor started for fun.

It doesn't matter if there's a YouTube video (#5). A quick search for:

So no, don't count on whale watching this summer while touring the Great Lakes!

2. I was reading a bit o' Irish history and happened to read about a place called Clonmacnoise, where, once upon a time, a few of the monks apparently saw a sailing ship fly past in the air. How would such a thing be possible? Can you figure out any plausible way that people could see ships in mid-air?

This is slightly more complicated--how are we going to start?

Let's break this up into two parts. First, can we find the Irish history about ships sailing through mid-air? And second, what could cause someone to see a ship (any ship) in the air?

For the Irish historical context, I started with:

Remarkably enough, the first hit is to an article on this very topic! The page is about the book The Wonders of Ireland by P. W. Joyce, 1911. In that book is told the tale of a ship that passed by a village:

"On a certain day when Congalach, king of Ireland, was at the fair at Tailltenn with a great assembly of the men of Erin around him, he looked upwards and saw a ship floating about in the air high over his head. While the king and his people were gazing at this strange sight and following it with their eyes in silent wonder, they saw one of the crew come forth and cast a dart at a salmon, which appeared also suspended in the air near the ship. He missed his mark, and the dart fell to the ground in the presence of all: so the man walked out over the side of the ship, and floating gently down towards the spot where his spear was lying, he stretched forth his hand to pick it up."

Okay. So it's clear that amazing things happen in Ireland, or at least amazing stories are told... (And for a really interesting and learned article on this topic, please read Voyagers in the Vault of Heaven from Material Culture Review. Who knew?)

But for the second part of our question, I did a search for:

[ appearance of ship in mid-air ]

The first hit is to the Sun newspaper's article with a photo of a cruise-ship apparently hanging in mid-air! (Link to Imgur image.) 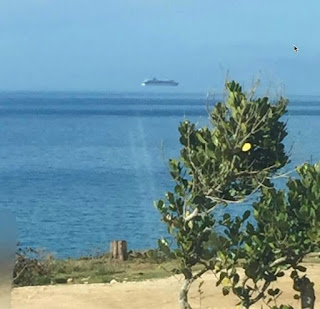 Unfortunately, the Sun (UK) newspaper isn't exactly the most reliable source on Earth.

(How did I know that? As always, I checked the source by doing a query for the name of the newspaper. That way, I learned a lot about the source of this interesting image. It seems to be a real image from an unreliable source.)

BUT.. the article does have some value to us as researchers.

The headline of the article is "ITS A FLOATER! Mind-bending photo of a cruise ship hanging in MID-AIR could explain how the Flying Dutchman got its name."

And the subhead is: "The illusion is known as a Fata Morgana, where light bent across the atmosphere creates projections of images."

Now that's interesting. What is a Fata Morgana?

This query shows us that it's a kind of optical illusion that is seen in a narrow band just above the horizon. Named for the sorceress of Arthurian legend, Morgan le Fay, after a belief that these mirages were fairy castles in the air or false land created by her to lure sailors to their deaths.

Fata Morganas significantly distort the objects on which they are based, so much so that the object is often completely unrecognizable.

In truth, the Fata Morgana is an optical phenomenon that happens when rays of light are bent as they pass through air layers of different temperatures, often along a steep thermal inversion where the light is bent.

Here's a series of images of our favorite islands, the Farallons, taken from a large distance away (each is taken a few seconds apart near sunset).

But can a Fata Morgana create the illusion of a flying ship? By searching for:

I found this article in Wired (linked to by both National Geographic and Scientific American) that claims is very possible.

That makes sense, as the last image in the Wikipedia article illustrates. This image is from the Frank Leslie’s Illustrated Newspaper (May 13, 1871); Department of Rare Books & Special Collections, University of Rochester Library and shows a huge Fata Morgana as sketched from a hill in Mount Hope Cemetery, Rochester, New York.

And the reason THAT struck my eye is that I used to live right next door to this cemetery. I used to run in the cemetery almost daily, and trust me, you can't see Canada from there.... unless there's a Fata Morgana in play.

Here's a Google Maps image showing the cemetery (and incidentally, where I lived, in one of those brick apartment towers just to the south of the cemetery). You can see Lake Ontario to the north. Toronto is 45 degrees to the left (NW) from the cemetery. And I have to admit that I would have been very surprised to see the Canadian shoreline rising up from the horizon like this... 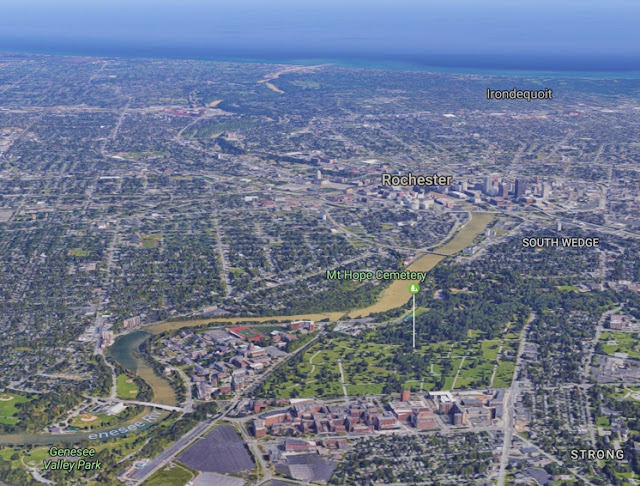 If a fata morgana can make a coastline seem to float in the air, a boat would be easy.

In any case, I think we've figured it out. A Fata Morgana can make a ship near the horizon seem as though it's actually flying in mid-air.

3. Since I'm in landlocked Switzerland, someone happen to mention that Switzerland has a navy. I've only ever heard that term used perjoratively, so I wonder: Really? Does Switzerland really have a navy? If so, where is it?

To start, I asked the simple query:

and found a couple of Wikipedia entries describing a small flotilla of military patrol boats that's actually a branch of the Army. They not only do patrols, but also search-and-rescue.

Such collections of vessels in landlocked countries are sometimes called "brown-water navies."

GlobalSecurity.org (a major web site that describes military equipment and inventory by country) describe the Swiss Navy as "Even if landlocked... [Switzerland] ...has a small navy of sorts."

Switzerland also has a long and rich tradition of having a merchant marine flotilla. While these aren't full naval fighting vessels, the merchant marine was set up to keep Switzerland in provisions during the Second World War. This has continued ever since.

So yes, they have a navy--a smallish, brown-water navy that patrols the rivers and lakes of Switzerland (especially those lake that have international boundaries in them).

And the phrase "Admiral of the Swiss Navy" is a pejorative term used to describe someone who has a very inflated sense of self-worth. Interestingly, this term is used only only in the US forces since the Swiss lakes flotilla has no admiral, as it is only a company-sized unit of the Swiss Land Forces.

When you read something that seems a bit extraordinary, it's worth spending just a couple of minutes to track it down and verify the wild notion. Today we learned that:

1. One query is often enough to find enough information to verify (or disqualify) a sketchy piece of information. For instance, whales in the Great Lakes sounds reasonable, until you do that one query, and by looking at multiple results, you can quickly find that this is a bogus idea that was started as a joke... and got a little out of hand.

2. Even unreliable sources can have clues that are useful. In the case of the "flying ship," I don't trust the Sun to have much reliable information. But in this case, they gave us an important term--fata morgana--that let us find good information from other sources. Verify your sources, but don't let them blind you to every possible clue!

Thanks to all who contributed comments this week. Nice job, everyone!

Stay tuned for Wednesday's search Challenge: I've already worked it out (which is unusual for me), but it's a very fun one to do. It's also really useful for planning your summer.

See you in a couple of days.