Yes, I know I asked about the Papago, but remember this: Things Change Over Time.

This is one of those things you have to remember, especially when looking for cultural identities or political bodies--states come and go, and cultures often get named one thing at one time (usually by whatever group is in power at the moment) and then renamed to something else later. In many parts of the world, Native peoples have been reclaiming their names as they regain power. This is what's going on with the people previously known as the Papago.
Recall our questions from last week: 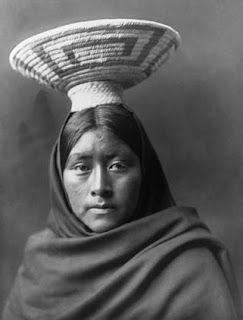 1. When I learned about the Papago tribe, I naturally assumed they were an Arizona tribe. But is that really true? Where are they located? Where are their historic tribal lands?
I started this quest with the obvious query:

and quickly learned from the Wikipedia page that what I grew up knowing as the Papago tribe has been renamed as the Tohono O’odham (pronounced TOHN-oh AUTH-um) people.

In checking the reference links at the bottom of the article, I found a link to the official Tohono O'odham nation website.

On that site, they describe their traditional lands as "...an enormous area of land in the southwest, extending South to Sonora, Mexico, north to Central Arizona (just north of Phoenix, Arizona), west to the Gulf of California, and east to the San Pedro River."

That cuts across parts of northern Mexico, Arizona, and California. But, oddly, my search for:

found several maps, many of which have this very suspicious, very straight boundary that magically aligns with the edge of the US/Mexico border. 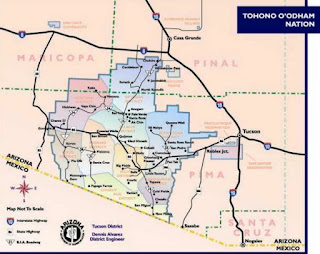 My search also found this really interesting map from Al-Jazeera:


However, when you zoom in enough, the border now looks like this: 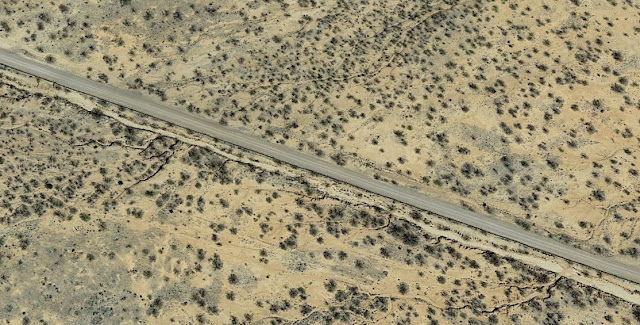 This straight line is the artificial boundary that split the Tohono O'odham nation roughly in two. It was one of the results of the Gadsden Purchase of the territory from Mexico in 1854 that redrew the border right through O’odham territory.


2. Who is John P. Harrington, and what relationship does he have to the Papago? What is he best known for?

leads to a wealth of resources. I could write an entire article about this fairly remarkable person, but the relevant resources here are the Wikipedia article, which summarizes him as "John Peabody Harrington (April 29, 1884 – October 21, 1961), an American linguist and ethnologist and a specialist in the native peoples of California. Harrington is noted for the massive volume of his documentary output, most of which has remained unpublished: the shelf space in the National Anthropological Archives dedicated to his work spans nearly seven hundred feet."

One of the first links in the SERP leads to the Smithsonian Collection of Harrington's notes (the National Anthropological Archives are at the Smithsonian). The J. P. Harrington Collection of linguistic and cultural materials is one of the most remarkable holdings , including documentation on over 130 languages, many of which are now endangered or no longer actively spoken.

The next obvious search:

(It's worth pointing out that the query [ Harrington Papago] works just as well).

This leads to at entry at the Smithsonian about his research among the Papago/Tohono O'odham. This entry describes his trip in the spring of 1930, with assistant Henry Cervantes and Joe Moore as his auto mechanic, they began a trip following the route of the Anza expedition of 1775 -1776. They left from Salinas, California, going by way of Yuma, Tubac, and Nogales, Arizona, into to Sonora, Mexico. Harrington later reported that they had covered 872 miles of desert driving.

In the course of this placename trip, Harrington minutely described each day's route and often illustrated it with a roughly sketched map. Included in the itinerary were stops at Casitas, Querobabi, Chupisonora, Opodepi, Camou, and Imuris--small towns along the way.
Regular Reader Jon (the Unknown) found a wonderful obituary of Harrington. It includes such tidbits as "He never possessed a telephone at his home, and only a very few intimate friends knew his personal address. If he thought it were becoming too well known, he changed it..." And "He was one of the first anthropologists to realize the importance of coordinating other scientific disciplines with ethnology. He was deeply interested in the viewpoints of the various Indian tribes on natural history, and the majority of his field notes contain detailed sections on ethnogeography, ethnobotany, ethnozoology, ethnoconchology and the like. The “Ethnobotany of the Tewa Indians” (1916), a product of the 1910 field work, is a forgotten classic, far ahead of its time in its attention to native systems of classification."

As I read the previous web page, I just HAPPENED to notice that "...At a California Exposition on Treasure Island in June 1939, Harrington had occasion to record a Papago vocabulary from Manuel and Molly Williams of the Papago Reservation at Sells, Arizona..." 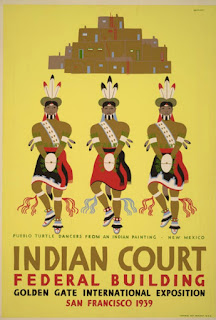 But if you recall our Challenge about the Pacifica statue from a while back, we learned there that the original Pacifica statue was installed at the California Exposition on Treasure Island, so my search would have been:

both of which lead to the previous Smithsonian page about Harrington visiting the Papago-speakers on Treasure Island. Both the speakers and the statue were on Treasure Island at the same time. (The Tohono speakers were at the "Indian Court," one of the exhibitions at the Exposition.)

Why this query? Because it seems really unlikely to me that Papago would have somehow been connected to the statue, but it was very likely to be at the main event--which in this case was the California Exposition, or linked to its unusual place name, "Treasure Island." both are correct.

4. I'd like to learn more about their spoken language: Can you find a recording of someone speaking it?
This was pretty easy as well. I went straight to YouTube with the query:

and found a good number of examples.

The second hit is a nice extended sample of David Garcia (of Tohono.tv) speaking in Tohono O'odham.

1. Remember: Names change, and your search strategy has to take this into account. I have to admit that I knew "Papago" was an outdated term. But I didn't know what the new/correct name was. So I had to start with Papago, and then learn the correct name is Tohono O'odham.

This becomes a real issue whenever you're trying to do research in history. Some places change names frequently (example: the city of Constantinople has been known by many names over the years, including Byzantium, Βυζάντιον, Konstantinoupolis, Κωνσταντινούπολις, and Instanbul). Remember this is also true for people and ideas. The political party definition of "Republican" has varied a great deal over time, and some political parties no longer exist (in the US, as is true elsewhere). When was the last time you spoke to someone who described themselves as a "Whig"?

But sometimes the old ways linger (searching for "Indian" is often a great strategy, even though that's not the preferred term these days). This is especially important when you start to search for changeable terms in archives? (Note: You might have to do a search for a decidedly non-PC term like "injun" to find references in archives.)

2. Dig into the anomalies you find. The straight-edge tribal land boundary looked suspicious to me, which is why I decided to dig a little deeper. The fact that the Tohono O'odham people predate the US/Mexico border AND that the tribal land boundary happened to line up with the state boundary... well, that's too much coincidence. Sure enough, there's a good explanation for the anomaly.

(This is a new section I'll add from time to time--ideas for more research for your students.)

A. How many Tohono O'odham speakers are there? Who's making the estimates of the numbers? (Remember that a US Census won't count the folks in Mexico.) How do such population estimates get made?

B. Are there other Tohono tribes? What are their names? Did they split off from the "main" tribe once, or why would there be other Tohono speakers?