Answer: Mysterious rainbows and fossils in the floor?

Dan Russell • January 21, 2020
SearchReSearch
Republished with permission from SearchReSearch
Answer: Mysterious rainbows and fossils in the floor? Dan Russell
I should have known....


.... that this SRS Challenge was more complicated than I'd expected. I've been working on it for the past week!

Rainbows are fairly straightforward. Here's a nice one of my building (the brick and glass building where the rainbow ends).. 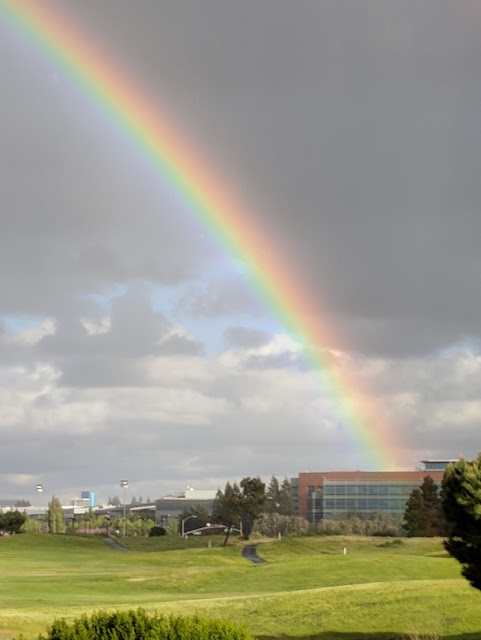 But other rainbows get more complicated. Just to remind you, here's the rainbow pattern that we were asking about last week.

So I'll put these questions to you, my faithful SearchResearchers...

1. What's causing the rainbow effect on the floor in the photo above (#2)? Any ideas?

Now I have to admit that this is a fiendishly difficult Challenge. My apologies. I didn't really give you enough information to figure this one out JUST by doing online searches. And that in itself is a useful Search Lesson. (More on that in a bit.)

That rainbow is clearly NOT in the window, but is a property of the reflection on the floor. Let's zoom in a bit. Here's the rainbow pattern up close:

As you can see, it's actually a repeated pattern, from the left: a standard red/yellow/green/blue rainbow, then a red-orange section, then a dark band between the leftmost and the rightmost rainbows.

I went around the office taking many pictures of the floor rainbows and everything was fine until I took this photo (one floor above "Floor rainbow 1"). 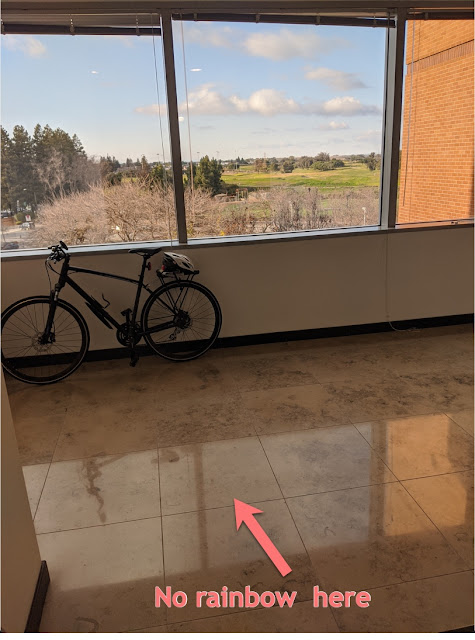 It's the same kind of flooring... why would it not have a rainbow on it?


I puzzled about that for a while, then the next morning I got this photo from a different part of the building: 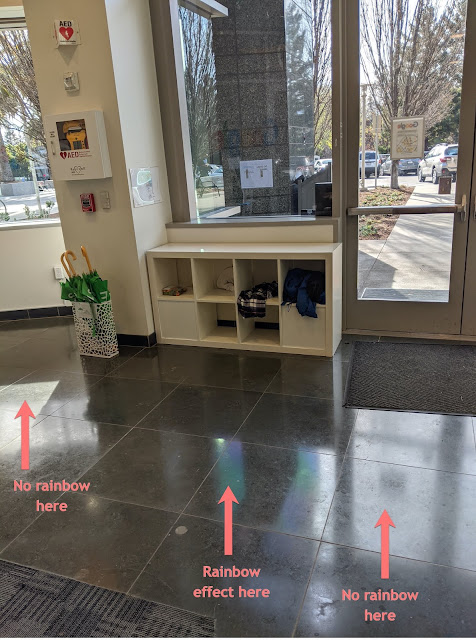 This floor is also a kind of fossiliferous stone, darker in color, but very similar to the stone flooring in the other images.

So why is there a rainbow pattern in the center section and not to the left or right?

Look carefully at the picture: the center section (where the rainbow is) is actually a reflection of a window and stone paneling on the outside of the building. Both the left and right sections are actually just reflections of the sky.

Fascinating. Why would that make a difference?

One last bit of data: I also noticed that the strength of the rainbows depended on the time of day.

I ended up asking a friend of mine Jim who happens to have PhD in optics. (Thanks, Jim!)

The light from the sky is polarized (at least partly) due to scattering. While light reflected by the floor at an angle acts also as a polarizer. (Think of the glare from the windshield of your car being mostly one polarization and your sun glasses blocking that same polarization.)

When you put a piece of glass between these crossed polarizers most of the light should be blocked... except the window has stress in it rotates the polarization. So the dark band is from a section of glass with no stress on it. But the rotation of the polarization is dependent on wavelength.

So on both sides of the dark band are white bands since most of the colors having their polarization rotated to pass the second polarizer (known as the analyzer) but by the time the birefringence becomes enough to rotate enough to get another dark band, the colors start to get out of synch. As you move further away from the dark band, you miss the blue then the red is missing then you get pink and other colors that are not colors of the rainbow but rather mixtures of colors!

You might try pushing on the window to see if you can modify the stress pattern or add some Scotch tape and see the effect.

Did I do that? Of course! Guess what? The pattern moves on the floor, and in particular, if you push hard on the window, MORE rainbows form. Why?

I'll spare you all the details, but I took a LOT of photos of places where I saw the rainbow pattern and places where I did NOT see the pattern. It took a lot of reading (starting with what Jim wrote above) before I figured it out.

Here are the diagrams I ended up drawing for myself to make sense of it all. Bottom line: The windows and floors are basically a polarimeter in the wild.

A polarimeter is an optical device using polarized light that scientists use to see the stress patterns in clear glass or plastic. Here's what those stress patterns look like when seen with polarized light. The person is holding a plastic fork between two pieces of special polarizing plastic. See the colors? Look familiar? The picture below is basically a handheld polarimeter.


So, why are we seeing rainbow patterns like this on the floor in my office?

The answer is hidden in Jim's message to me. There are two things to know:

(1) sunlight from the sky is somewhat polarized... depending on direction and time of day. (I did a bit of searching on this... a great query is [ polarization of the sky ] which leads to several great articles pointing out that the sunlight is mostly strongly polarized at 90 degrees away from the sun.)

(2) light that reflects off something is polarized. That is, the floor is acting as the second polarizing filter.

In essence, this in a naturally occurring polarimeter. The atmosphere is polarizing the sunlight before it hits the window. Then, the light bounces off the highly polished floor, which acts just like the second polarizer (that is, the analyzer). The guy on the right then sees the rainbow patterns on the floor which are actually the stress patterns in the window glass.

So why doesn't this work in the dark-stone floor picture? A: Because in this case, the sunlight is coming straight in from the sun... and it's not polarized! By contrast, the light in the center section is reflects off the windows outside, which polarizes the light before it passes through the window, and reflects off the polished floor!

One last mystery: Why don't we see the rainbow on the "no rainbow" floor? A: It's too dirty! That floor hadn't been cleaned in a while... there's no wax on it and the reflectivity is too low. (I'm trying to get them to clean it, just to test my hypothesis.)
2. What ARE those things in the floor? 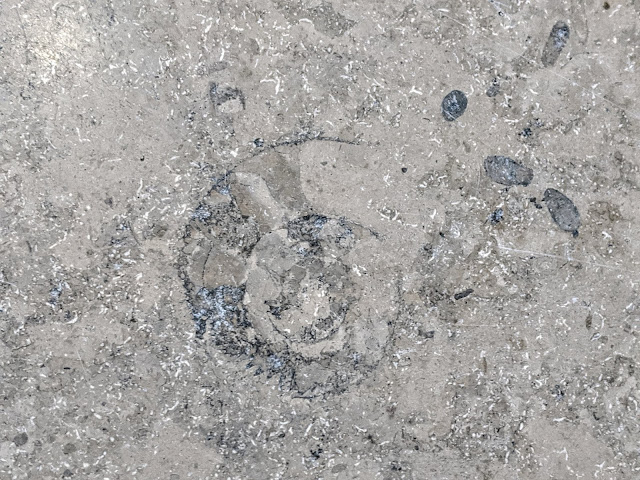 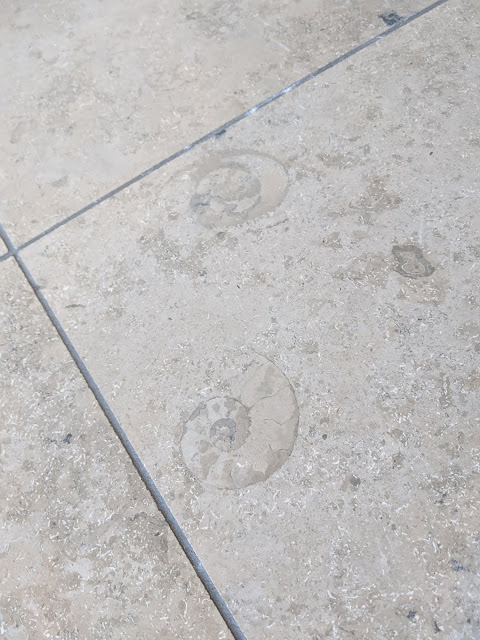 This one was pretty straight-forward... the obvious query:

Leads to this image search result: 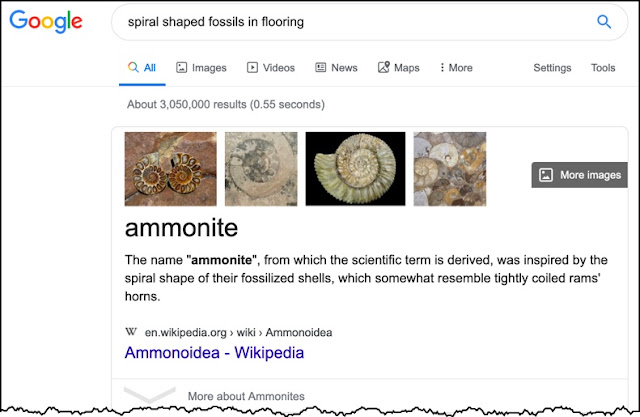 And once you know that, it's easy to check this result and by searching for:

and find lots of examples of ammonites in the floor. (But in reading the descriptions of the tiles, it's clear, as several Regular Readers pointed out, that fossils don't occur in marble, but in limestone instead. Marble is metamorphosized limestone that has undergone enough heat and pressure that the calcium carbonate crystals have re-crystallized, wiping out any fossils that were in the limestone.)

So those horn-shaped fossils are ammonites, a kind of extinct marine mollusk in the subclass Ammonoidea of the class Cephalopoda. These ammonites are more closely related to living coleoids (e.g., octopuses, squid, and cuttlefish) than they are to currently living nautilus that they highly resemble.

1. Sometimes you just don't have enough information and need to ask for more. Once you realize this--that you have to seek out additional information about the situation--you know you're onto a real problem. A couple of intrepid SRS readers did that (and once they started asking more questions, that's when I realized this was harder than I thought)! Real-life is often like this; you need to determine WHAT you need to know, and then set out to acquire that information. So, although I didn't intend for this Challenge to be so difficult, it's a great lesson in the way real-world Challenges arrive on your doorstep... they might not have a neat, simple, elegant solution. Sometimes they require more work, more data, more research.

My apologies for giving you such a massively hard problem. But kudos to those readers that worked hard to figure out an answer. Collectively we got really close!

(Plus, it pays to have smart friends you can ask questions!)

2. Although the fossils in the floor was pretty easy, it pays to check and read the results carefully. When I saw the floor, I really thought it was marble. But reading the results taught me that fossils really don't occur in marble... but in limestone. Double checking the results (and reading carefully) taught me all kinds of things!