Dan Russell • September 27, 2018
SearchReSearch
Republished with permission from SearchReSearch
Answer: Mysteries from Mozart’s time Dan Russell
How many pianos in Salzburg...
... can you Ferminate and answer the Challenge?
Well... okay... let's just jump into it. The Challenges from last week, please...

1. As you know, Wolfgang Amadeus Mozart had a famous sister--also a performing prodigy. Maria Anna Walburga Ignatia Mozart, called Marianne and given the nickname "Nannerl, was his older sister. But in nearly every picture of her, she's got a remarkable head of hair. See this picture below:

The question I had was How do you sleep with hair like that? Or, I suppose, the other way to think about it would be How much time do you spend on hair like that? Any ideas?
This is a pretty open-ended question, and it's worth noticing that while I asked the question about Nannerl, a simple image search for:

quickly tells us that florid, extravagant hair was the rage in the late 1700's. Here's what you get if you look at the images from that query: 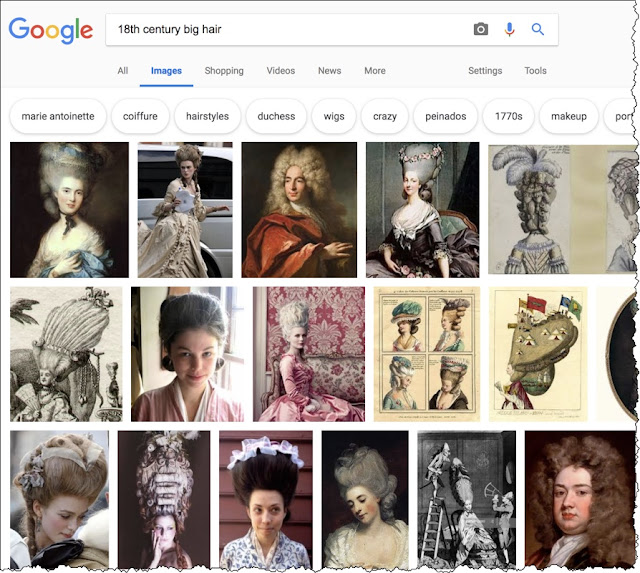 Sure, some of these are modern recreations, but clicking through some of the obviously older images quickly leads to images like this, for both men and women: 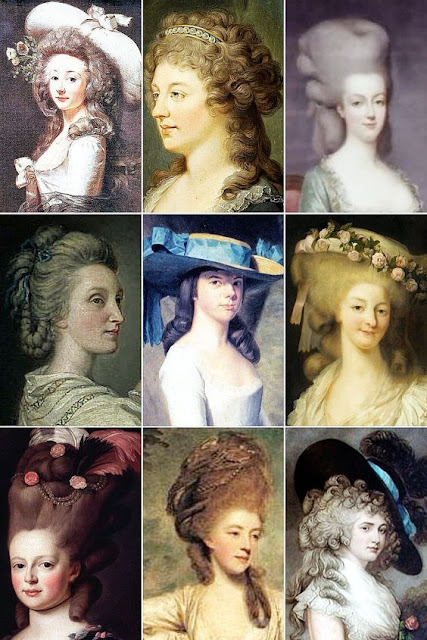 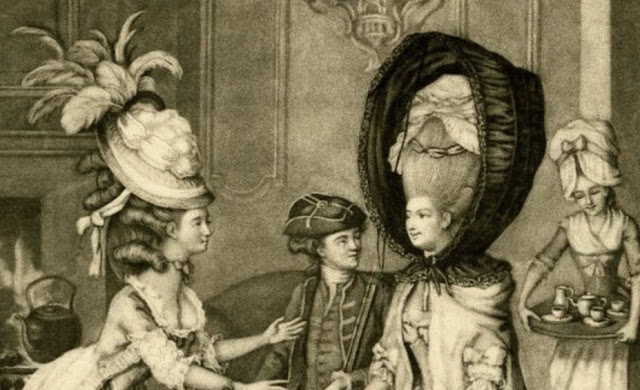 One of the blogs that appeared with this query was Two Nerdy History Girls with their great post on this topic. In part 2 of their post, they spoke with hair dressers at Colonial Williamsburg living museum who actually practice this craft and asked the relevant question, "How long does it take?"

Their answer? Not as long as you think--around 10 minutes for an "ordinary" pile of hair as seen in some of the images above.

In reading their blog, I learned a new term: pomatum (a kind of scented pomade applied to hair to give it some structure and scent). Using this in a query, such as: [ pomatum 1700..1799 hair style ] leads to books about fashion, and to the inevitable Wikipedia article about hair styles. All of which agree: These hairstyles can be relatively straightforward (around 10 - 15 minutes) to build a relatively simple coif, but the larger, more impressive and elaborate hair-dos can take a long, long time.

And yes, you don't sleep in these things. You take them down in the evening and comb out the hair. (Whew!)

2. When I visited the Mozart residence at No. 8 Makartplatz (the so-called "Dance Master's House," aka Tanzmeisterhaus), I was struck by the odd appearance of one of Mozart's pianos--the key colors are reversed! The accidentals are white, while the naturals are black. Here's what I mean; Mozart's piano keyboard is on the left, while a current piano keyboard is on the right.

So... when did the colors change from black naturals to white naturals... and why?

I started this Challenge by looking for a history of the piano. I figured any such account would probably cover the key color shift, and give some references to boot. I started with this query:

[ history of the piano key color ]

All of the resources found on this SERP told me that the piano was invented by Bartolomeo Cristofori, and that his original pianos had black keys with white accidentals (those keys that are shorter and raised above the keyboard). That's certainly the case for Mozart's pianos (see above).

As with many things, there are a number of stories about why the colors changed.

Even on the Question-Answering (QA) site Quora, there are a number of hypotheses on the post Why are colors of piano keys reversed on certain Viennese pianos:

a. Cristofiori's friend convinced him to change the color.

(As a piano player myself, I will also add that ivory keys are very robust and have a great touch--they have just the right amount of friction and absorb sweat well. They're just much nicer to play than wood.)

Reading more of the results from this single query, I found that:

Piano maker Yamaha believes, Living Pianos, and the Joshua Ross website believe (c). And I as read through many of the results, that seems to be the dominant belief.

More importantly, I could not find a solid justification for the color switch. Without finding a design document or standard (that says something like "henceforth, all accidentals shall be black and the naturals shall be white"), and given that so many early pianos, clavichords (a precursor instrument), and harpsichords have black naturals, it's more likely that it's just the fashion of the time that turned into standard practice.

Not all questions have clear, unambiguous answers--and this might be one such question.

We'll leave this Challenge marked as "open for more research." After looking at at least 100 different sites (including history books about pianos), this is as far as I got. Maybe we'll find a better answer in the future!

3. Speaking of Fermi Estimation and Mozart's piano (we were, weren't we?)... What would you estimate as the total number of pianos in Salzburg during the year when Mozart left Salzburg for Vienna? How would you do this estimate?


This is another Challenge that could consume a LOT of time. I know I had to keep resisting the urge to answer this definitively... Our goal is to estimate the number of pianos.

I started with a basic question: How many people lived in Austria in 1781, the year Mozart left Salzburg for Vienna?

Now, how to estimate the fraction of the population with a piano?? (Not organs, clavichords, or harpsichords, but honest-to-God pianos.)

With a search in Google Books for [ piano social history Salzburg ] I found the book Men, Women and Pianos: A social history, which points out that in Vienna, during Mozart's time, around 2% of the population had a piano at home. If that number holds for Salzburg (only a couple hundred miles away), 2% of 16,000 would mean there were approximately 320 pianos in private homes. If we add in a few for schools, churches, etc -- that would bring the number to around 350.

Things changed a few years later when piano manufacturing started in Salzburg and Vienna on a large scale, but at this time, in the late 18th century, there weren't that many!

There are a couple of things to learn from this Challenge.

1. A simple query often leads to a number of results which are collectively quite good. In the "big hair" Challenge, not all of the results were superb... but when reading them en masse, you can learn a bit from all of them--in particular, terms of art like pomatum that let you dig more deeply and precisely into the topic. That is, the collection is more valuable than any one item.

2. While it's tempting to dig deeply into a research topic, when estimating, you want to find just the essentials to make your case. In the Challenge about numbers of pianos in 1781 Salzburg, all I wanted to do was to find the population of Salzburg AND a reasonable estimate of the number of pianos in an Austrian city. I found the number for Vienna, and transposed that to Salzburg. Just be careful when doing an estimation search as opposed to finding a definitive answer.

3. Sometimes... you can't find a definitive answer! Yes, my friends, there are some Challenges for which a definitive answer lies somewhere in the mists of history. So why DID piano keyboards reverse their colors? We might never know. We have hypotheses, but I wasn't able to find a clear cut answer.