Dan Russell • February 9, 2016
SearchReSearch
Republished with permission from SearchReSearch
Answer: Mysteries at Universities Dan Russell
These three images need different skills...
Remember that our Challenge this week was to figure out where these pictures came from and what's going on in each of them. All you know is that they come different universities AND that I took them.

1. What IS this strange animal perched on the edge of the building? And what's the story that led to it being installed on a university campus? (Yes, you could call it a gargoyle, but can you be more specific than that?)

If you zoom in a bit, you can see the post in the lower left of the image says "Arizona State University." A query search for [ Arizona State mascot ] tells as that it's... a Sun Devil! Interesting, but not quite right. On the other hand, in reading around a bit in this list of hits, I DID find that the

I then checked the EXIF metadata, and found the lat/long is: 33.450469, -112.066600. I went to Google Streetview and found a somewhat better image, clarifying that it really IS a cat (and not a dragon, or something similar). 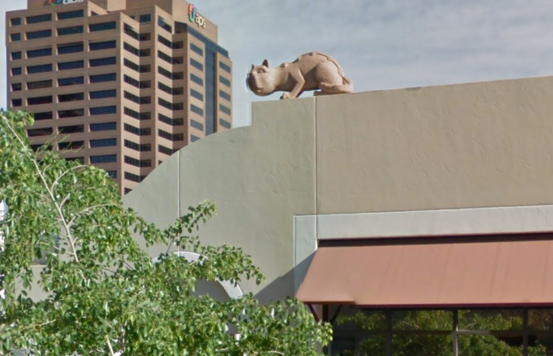 Since these are ASU (Arizona State University) buildings, I tried the query:

and then checked images. That's when I saw a beautiful image that was MUCH better than mine. If you click through and visit the page, you'll find the whole image by Cobalt123. 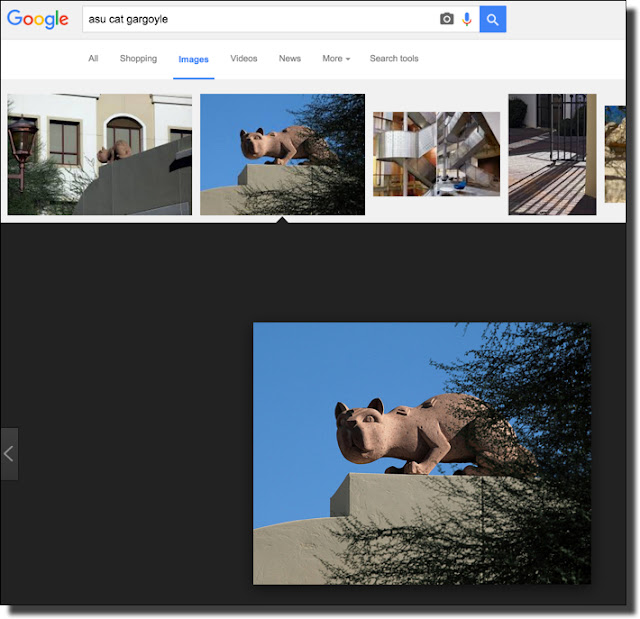 What's striking about this closeup is that there are obvious diamonds on the back of the cat. What's up with this?

So I did the query:

[ Arizona cat diamonds on back ]

BUT as I was typing the query, this suggestion popped up:

I can't pass up a suggestion like that (especially when it's so close to our goal). Lo and behold, I discovered that there is a baseball team in Arizona called the Diamondbacks... and, there are a lot of pictures of cats in Arizona Diamondback uniforms. That's slightly funny, but why so many?

When you do the query [ Arizona diamondbacks cat ] you quickly learn that their team mascot is D Baxter, the Bobcat of the Arizona Diamondbacks.

And that, my friends, is as far as I got. It's clearly a cat, and it might be a reference to the local baseball team, but I wasn't able to run it down. (But I suspect a connection here...)

2. What's this odd pattern of bricks over the window? Why is it there?
Interestingly, Remmij found the answer to this Challenge by using the "crop the image to just the brick pattern" and then doing a Search-by-Image for that.

I have to admit that when I tried that method, it didn't work for me.

BUT there's still hope. You know that I took the photo, and if you use the metadata viewer, you can figure out that this picture was taken on February 28, 2012 at 9:34:09AM. (Note that there's no lat/long metadata in this image.)

How can you figure out where I was on that date?

Since I'm a bit of an academic kind of guy, I have a home page that lists most of the talks I've given over the past several years. A search for:

takes you to my page, and a Control-F for 2012 reveals that I was visiting Princeton on February 28th!

Now the search is much simpler:

search in Google Images leads you to another picture of the bricks on the Princeton Computer Science department web site. If you then modify the query to be much more specific...

you'll quickly find the page that explains it all.

This brick pattern is on the west wall of the CS building and was built into the wall in 1989. The pattern is actually a bit pattern of five 7-bit ASCII values. The vertical lines to the left and right are "framing bits" (that is, they just outline the pattern). So the pattern reads (top-down) like this:

If you look up [ASCII] you'll find a table of values that map from the bit patterns to the five text characters:

And if you look THAT up, you'll find that it's one of the great (and as yet unsolved) questions in Computer Science!

Here, there's even less metadata--no location, no time stamp. So I did the simplest possible query based on what I know:

And that leads quickly to a bunch of pictures of this small "House of the Pooh Bear" which is on the Harvard campus near the Science Center. As this Quora article points out, it's been around for a while, the exact origins are lost in history. But it IS a little bit of whimsy on the Harvard campus.

1. Not all questions are easy to answer... though you can get close. When I wrote the "cat" question, I had assumed that it would be straightforward to look it up. I was counting on the ASU student newspaper to have an article on it... but no. I spent about 2 hours trying various things, none of which worked. (You have to stop working on the Challenges sometime!)

2. Remember that other information sources can be useful to triangulate on the answer. In this case, knowing that I was in Princeton on the metadata-derived date of the second photo made the search fairly straightforward. (Of course, actually figuring out that the brick pattern was an ASCII code required some digging.) But the bigger point is that information from another source can vastly simplify your primary search challenge.

3. Sometimes a simple query can get you what you need. That's the lesson of the tree-stump house for Pooh Bear. I was surprised at how simple that was. I guess I somehow thought that ALL universities have locales out of the Christopher Robin / Pooh Bear books!

One of the things I always tell my teachers (and try to enact in practice myself) is that even simple questions are sometimes very hard to answer. Even though I thought the Arizona cat would be simple, it really wasn't. Surprise! This will happen to you. Moral of the story: Pre-test the search questions you give to students, lest you too be very surprised by what you (or they) find when doing the research!