I'm about to head over to Scotland for a conference all of next week, but SRS will continue unabated! (Assuming I can get a bit of wifi in a coffee shop somewhere.) I'm looking forward to a Celtic-inspiration for SRS!

But last week's travel has brought up a couple of little questions--the kind of questions that happens to me (and I bet to you) every time I travel around. Here are three from my walkabout in a town that's near some impressive mountains.

Can you answer them?

1. When I look out of my hotel room window, THIS is what I see: spectacular mountains. Can you tell what city I'm in? (Yes, I've removed the EXIF metadata. You'll have to work with just what you see.) 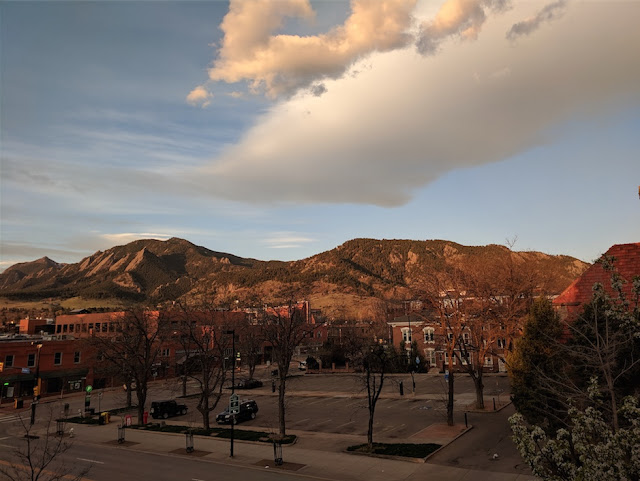 As the SRS Regulars quickly figured out, this is in Boulder, Colorado.

I would have zoomed into the image, looking for something I could identify. In this case, I downloaded the image and then looked around a bit. In this case, there's a lovely sign that says "Pearl Street Parking" (the green sign in the left-of-center foreground). Then, doing a query like this:

quickly tells me that it's Boulder, Colorado.

However, when I tried to do this just now with the image that's in the blog, I realized that the Blogger platform downsampled my image a bit, so it's really hard to read the text on the sign. (Darn it! Trust me--it's legible in the full res image.)

So, using our favorite subimaging trick on this image, I looked for the most picturesque part of the pic and made a quick image of just that. For this, I chose the cliffs over the town on the left. They're impressive, and I figured that a lot of people have probably taken this picture before.

Even though it's a bit low-res, when I did a search-by-image, it came up with a great result. 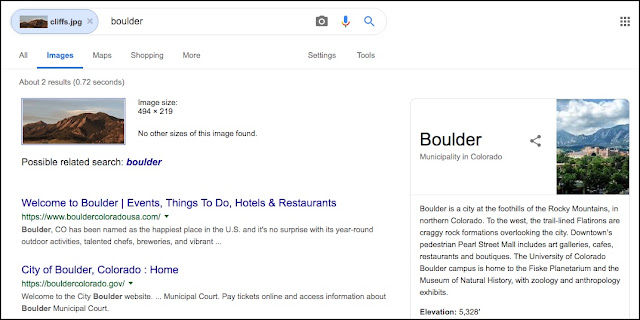 This is what Regular Reader amjeff did, and it clearly works pretty well. Note that the picture in the knowledge panel (on the right) is exactly the same as the image I cropped out of the larger photo. (I didn't know this ahead of time, I just went for "the most likely tourist picture" and got lucky.)

JonTheUnknown's approach was also pretty interesting. He looked on my home page to see if I had any connections with Boulder, and discovered that yes, I'm associated with the University of Colorado at Boulder. From there, it's pretty easy to look around and figure out that those mountains are the Flatirons, really dramatic angular mountaintops.

Remmij was able to figure out not only was I in the Boulderado Hotel, but also in the northwest corner as that's the only place where I could have taken this photo. (SearchResearchers are scarily good!)


2. As I walked to my meeting, I found a large field of these beautiful blue flowers--what are they? (Species specific name, please.) 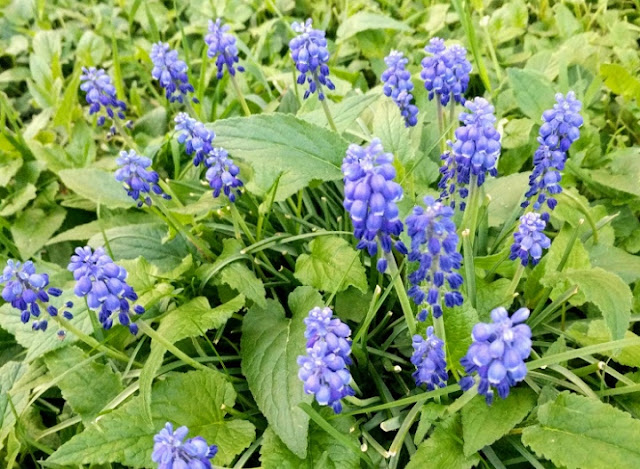 Several readers just knew that these are called Grape Hyacinth. I'm impressed. Somehow these flowers have escaped my attention until this week when I saw an entire field of them (this image is only a small part).

Since I was actually there (in real life!), I used an app on my phone called PlantSnap which told me what it was--Grape Hyacinth, in the genus Muscari, a group of perennial bulbous plants native to Eurasia with intensely blue spikes of dense flowers resembling bunches of grapes. (This one is most likely Muscari armeniacum, although there are many closely related subspecies.)

But if you weren't there, live in the field (and since I didn't see you, I bet you were somewhere else)... how could you do this on your laptop?

I tried the same subimaging trick and made a closeup of just one cluster of flowers. (Why? To avoid confusing the matching algorithm with too many parts of the image.)

And did the same search-by-image search. Look what Google says--Hyacinths. 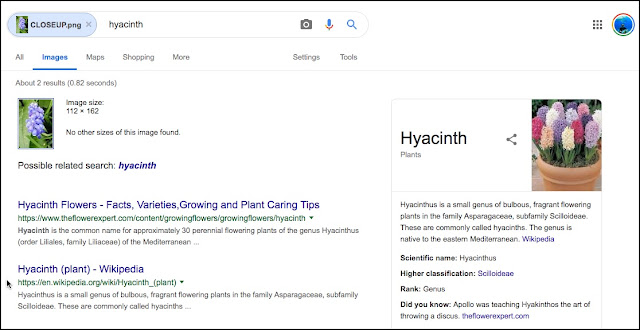 And that's kind of right; at least it's close. But look down just a bit to the "Visually similar images"

This looks really good. Clicking through on any of these blue flower clusters also tells you that it's a Grape Hyacinth, in all of their infinite variety.

Regular SRS Reader Ramón also used his phone (even though he wasn't there, so he had to do a different procedure) to do the same thing.

First, he viewed the SRS blogpost on his phone: 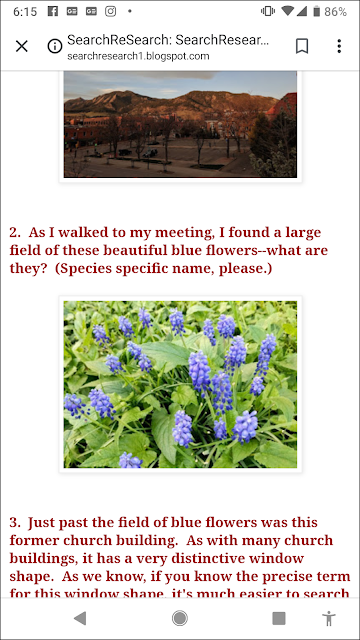 And then he downloaded the image to his phone. 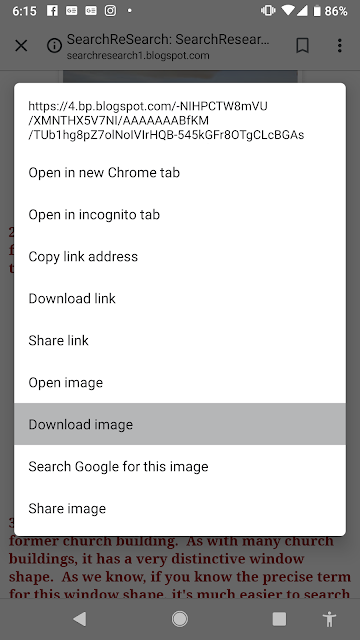 And then opened the image in Google Photos: 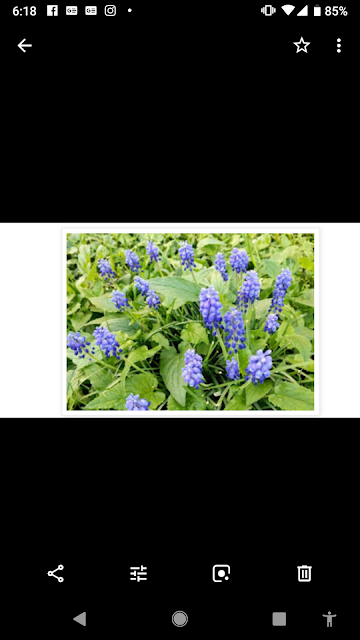 THEN... he clicked on the Google Lens icon (3rd from the right--looks like a square with a dot in the center and a dot on the lower right edge). This gave him the result: 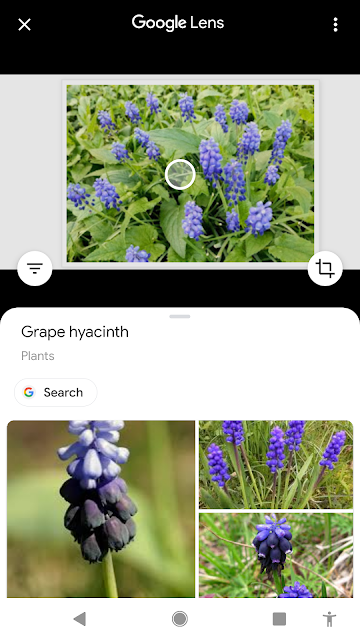 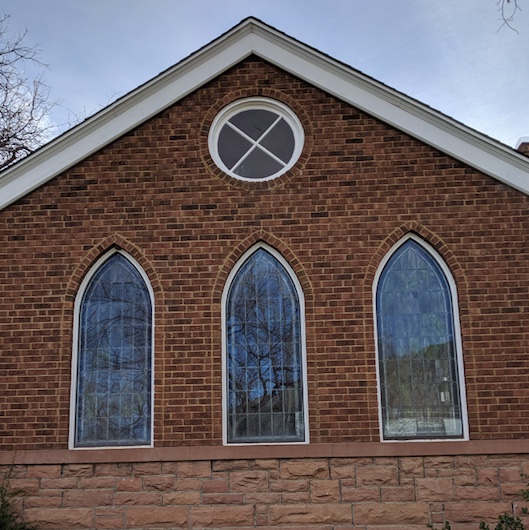 By now you know the trick: Subimage to just one window (crop tightly!) and do a search-by-image. As amjeff pointed out, this window is one of a pointed arch (aka a Gothic arch, which is lighter than a rounded arch and spreads the load sideways) or lancet window, so-called because of it's resemblance to a lance's point. This window design is common in Gothic architecture (or its later reincarnation as Collegiate Gothic, the the late 19th century / early 20th century).


BTW, for extra credit, is there a specific term for a building like this that was a church, but is no longer a church??

To answer this I used my favorite reverse dictionary like this to search for the term that captures this concept:

With this, I found that the term is "deconsecrated" (meaning "removed from its consecrated status as an active, holy church place").

Although, as amjeff pointed out, such churches are termed "redundant" in Britain (where that term is also used for jobs that are no longer useful or duplicated).

These terms, lancet window and deconsecrated are perfect for digging more deeply into the ideas. They're very precise.

Even for a short Challenge, we learned a few things...

1. Subimaging is a great trick. Yes, I know you know this.. but the skill of how to pick the cropping is still something worth learning. In most cases, you crop to the subimage that other people will most likely shoot. In the case of the mountains, that particular outcropping of the Flatiron Range is very impressive and very visually distinctive. That's why I cropped to that sub-piece of the large image. And what do you know, it worked perfectly. Likewise, when you've got a big image with many identical things in it (such as the pic of Grape hyacinths), crop it to just one representative image. Too many pieces in an image are confusing to the algorithms. (This may change in the future, but for now, focus in on just one singular element--try to get just the essential.)

2. An app is sometimes the right approach. When I was walking around, I tried using Google Lens on the hyacinth, but it was being really picky. Luckily, I have the PlantSnap app on my phone, which worked beautifully. Take note: There are MANY apps that have special identification capabilities--be aware of what they are and stay on top of your SearchResearch game. (We'll talk more about recognition apps in the future.)

3. Speaking of speciality apps, remember reverse dictionaries. They're incredibly handy for going from a vague concept ("buildings that are no longer churches") to a specific term ("deconsecrated"). As you know, if you have the specific term, that's MUCH better than casting around for a general topic. Specific terms rock... but only if you can find them! (AND.. be sure to double check that the term means what you think it means!)