Dan Russell • August 3, 2017
SearchReSearch
Republished with permission from SearchReSearch
Answer: Milking the milk topic… Dan Russell
Milk...
... is an incredibly complex fluid that's produced by the mammary glands of mammals shortly after pregnancy. It's an emulsion of butterfat globules in a water-based fluid filled with dissolved carbohydrates, protein aggregates, and minerals. Milk that's produced early in the milk production cycle contains colostrum, with lots of antibodies, protein and fat to help the infant thrive early on.

But I was primarily interested in how milk made it from dairies to the home.

Usually, the milkman would drive up in a milk truck to leave it on the doorstep, but the really nice houses had a kind of built-in receptacle to hold the milk and keep it out of the sun.
It's clear that milk trucks weren't the only way for milk to be delivered. I'd had this dog-cart image in my files for a while, and that begins this week's Challenge. 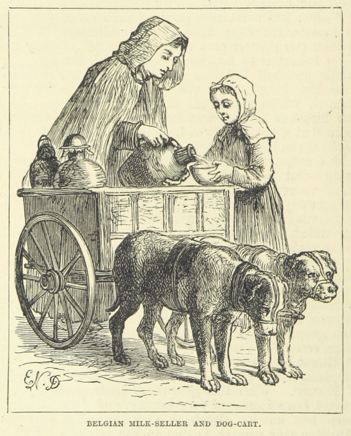 Then there's the matter of how milk is contained for shipment.

1. These milk containers: Do they have a specific name? If I want to buy one, what term or name would I search for? Is it possible to buy new ones? 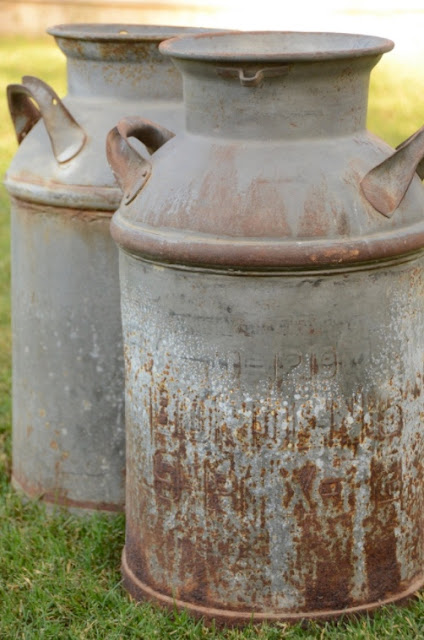 What IS the term for this?
I did an image search for this picture, and found that it brought up a lot of "antique" and "collectable" objects, most of which were called "milk jugs." Here's the SERP for the Search-By-Image result: 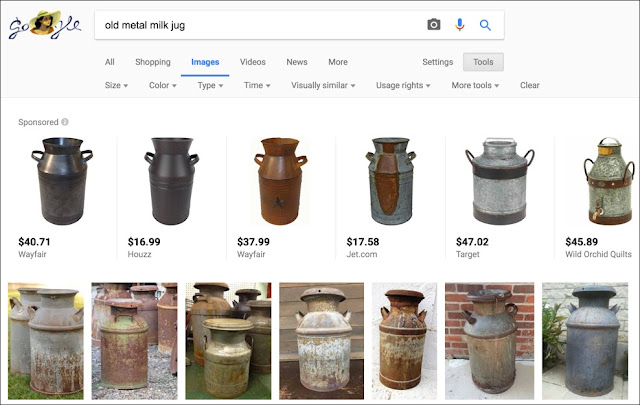 Notice that the proposed "best query" is [ old metal milk jug ] That's fine, but when you look at the results, they're ALL in the "antique" and "collectable" genre.
I was curious what's they'd be called when they're NOT collectable items.
To find this out, I started with a general text query for:
[ milk container ] 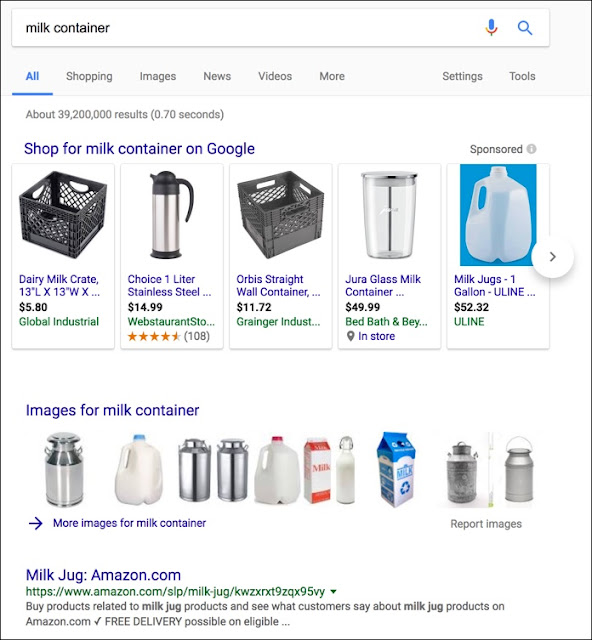 I knew this would be pretty generic. It has cream containers for coffee shops, gallon plastic milk jugs, etc. But this SERP also has an image of what I'm looking for (far left, second row of images).
AND it has a link to the Wikipedia page about Category: Milk containers. When you see a "Category" page on Wikipedia, it's a sign that there's a collection of items that are all different terms for the same thing. That is, it's a "Category" of things with that description. (For example: the Category:Philosophy page groups together different kinds of philosophy and philosophical topics.)
The interesting thing about the Category: Milk containers page is that it lists several terms for things-that-contain-milk. In particular, "milk bag" "milk bottle" and "milk churn."
I know what a milk bag is, and I know what a milk bottle is. I thought I knew what a "milk churn" was (that is, a device for making butter by "churning" it through extended manual labor), so having it show up here is a bit odd. WHY is a "churn" considered to be a "container"?
Naturally, my curiosity drove me to click on this link about milk churns, the first line of which is this definition:

A milk churn is a tall, conical or cylindrical container for the transportation of milk. It is sometimes referred to as a milk can.

The article goes on to point out that milk was originally shipped in regular milk churns (in the butter-making sense), but by the 1850s, they were replaced with similarly-shaped metal containers that held 17 gallons of milk.
I tested these definitions with the queries:
[ milk churn ] and [ milk can ]
which gives results like this: 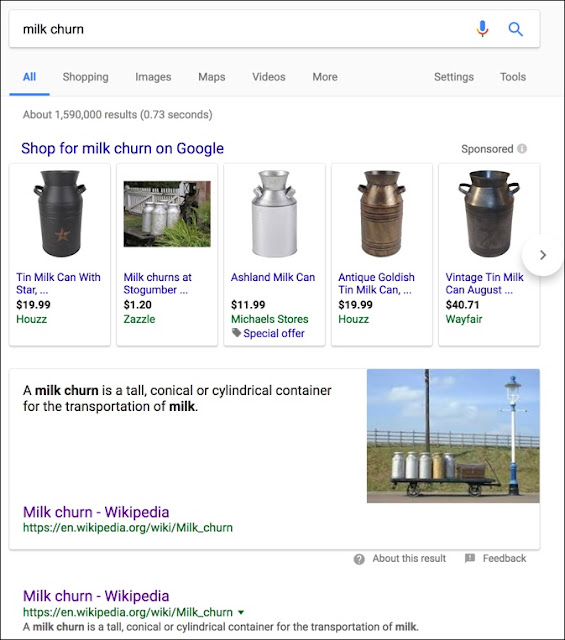 If you look at the Images page, you'll see this, including some very new, shiny, stainless steel (and purchasable) milk churns: 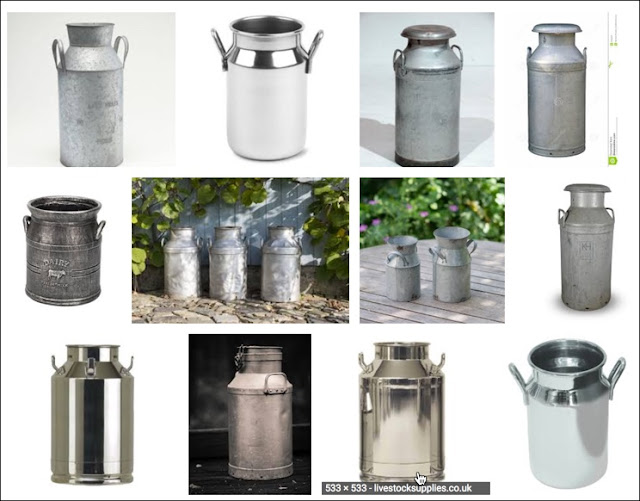 Now we know the exact term for these milk containers: it's a milk churn or a milk can. (And it seems that in the antique business, they're known as jugs.)
2. As I said above, some houses had a kind of mini-closet into which the milkman would put the day's delivery: What was that mini-closet called?
This is a bit tricky. I started with the query:
[ home milk delivery closet ]
and found that some people call this a "milk door." But I kept looking around a bit more after finding that first result. Why? It just seemed too... obvious.
I modified my query to be:
[ home milk delivery closet history ]
and that query led me to a number of different sources, including this May-June 1999 issue of Old House magazine (which is indexed in Google Books), where it's called a "milk chute."
Okay, which is it? Milk door? Or Milk chute?
Both show good results: 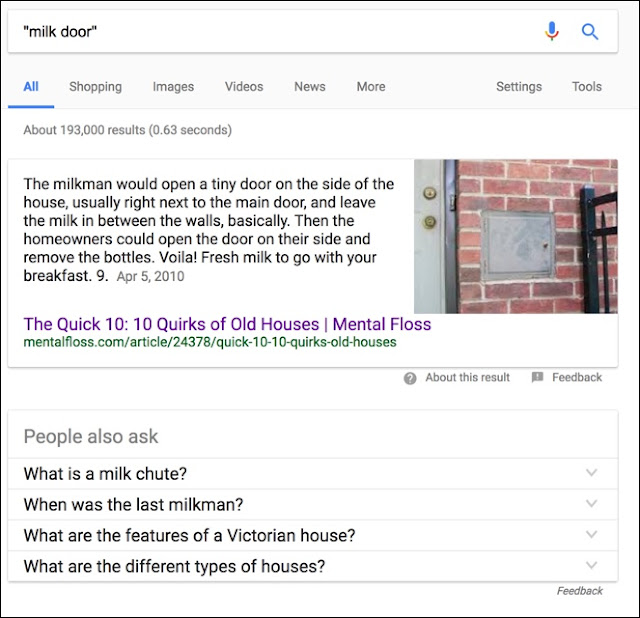 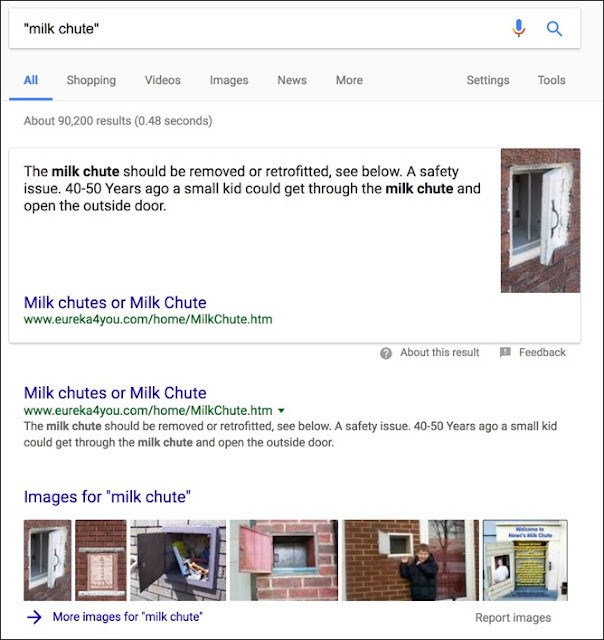 Yes, I see that there are 90K results for "milk chute" vs. 193K for "milk door." But both terms are in frequent use. (And most of the "milk door" results point out that they're also called "milk chutes.") In any case, it's not called a "closet!"
3. Milk delivery by dog? Seems odd to me--why use dogs to deliver the milk? In particular, can you figure out where that image of the dog-cart milk delivery came from? What other kinds of animals were (or are) used to deliver milk to the customer?
Search by Image for the dog-cart above, and you'll find it's an illustration of "Holiday Sketches" of Bruges, Belgium (specifically, Illustrated London News, September 25, 1875).
But why did they use dogs to pull tiny carts?
[ dog cart milk delivery ]
If you check Images, you'll find a bunch of dog carts with milk: 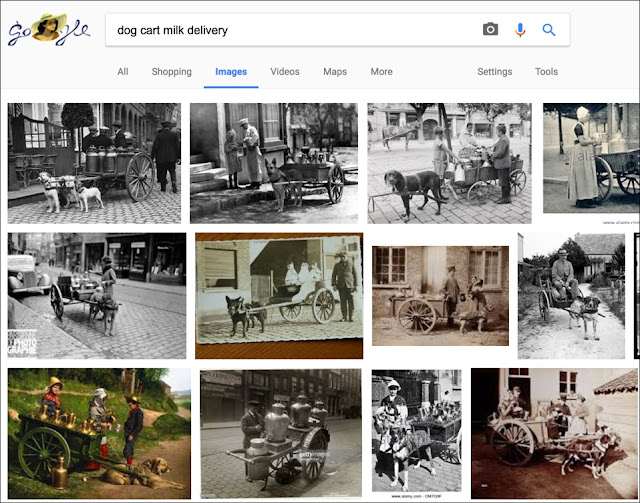 But... why?
The Wikipedia page on dog carts (found with this query) tells us that they "...were historically used in Belgium and The Netherlands for delivering milk, bread, and other trades. In early Victorian Britain, dogcarts were associated with bakers..."
That same article also uses some interesting language: "Dogs were used as draught animals during the First World War to pull small field guns. Dogs were used by Soviet Army in World War II to pull carts containing a stretcher for wounded soldiers..."
That sounds crazy, but notice the term "draught" (also sometimes spelled "draft"). That means "to pull a cart or wagon," as in the term draft horses. What if we did a search for "draft dogs"?
[ draft dogs ]
We find there's a Wikipedia page on draft dogs, but also an American Kennel Club page on dog breeds that love to pull carts!
Reading through these results reminded me that sled dogs are basically pulling a sled (which is a lot like a cart), and in the Americas, Indians would have dogs pull a travois (a kind of sled for no-snow conditions). So there's a long tradition of using dogs as small cart draft animals--which is just the thing you want when you need to deliver small quantities of milk, as produced by artisanal dairies...
What about other kinds of animals pulling milk carts?
With the query:
[ milk cart "pulled by *" ]
I found search results for milk carts pulled by horses, donkeys, mules, and dogs. But in the search results, I also spotted a camel pulling a milk cart, a zebra, and a pair of pigs in Pullman, WA.
So... why dogs? There's a long tradition of having dogs pull carts (and sleds), especially for small loads... like milk.

4. Milk generally comes from cows, and we have a lot of them in Wisconsin and California. But what other animals produce milk that's widely used as human food? That is, I know whales produce milk too, but it's not really a common food item. Which kinds of animal milk is used as a food product? (Extra credit just for fun and a surprise: Which four states are the top milk producers in the US?)
[ animal milk human drink ]
Leads to a number of articles about different kinds of milks that humans drink. An interesting article from Slate lists: cow, buffalo, goat, sheep, llamas, reindeer, horse, camel, and yak. Of course, people have tried milk from many different animals, but some are a bit impractical (milking a pig is really, really hard) or just plain unpalatable (such as milk from the Orca, which tastes very fishy).
Finally, figuring out what states produce what amount of milk isn't too hard:
[ US states milk production ]
gives the Statistia.com dairy-production (by state) data. Answer: California (40B pounds); ] Wisconsin (30B pounds); New York (14B); Idaho (14B). (Note: They get their data from the USDA Statistics Service, so I tend to believe their data.)

1. Terms vary for the same thing! As we found out, the steel "milk container" of our first Challenge is commonly called a "milk jug" by the antiquing community. (This is slightly confusing, as "milk jug" also refers to ceramic creamers and pitchers designed for milk. The cylindrical/conical steel container is (as we found) usually called a "milk churn" or "milk can." Be aware of the differences in terminology.
2. Test your understanding by comparing different definitions. When we were working on the milk cans, we compared the difference between: [ milk churn ] and [ milk can ] to verify that they were the same thing.
3. Use what you find to hone in on what you really seek. In the "milk door" vs. "milk chute" example, we started broadly, and used terms that we found along the way to refine our next searches. This is a really important point: Even mistakes on the search path can be helpful.
4. Don't forget that the * operator (fill in the blank) is incredibly useful to find things for which you don't know the name. In our search [ milk cart "pulled by *" ], we found a lot of different animals that pull milk carts. I don't know how else you would do this (without testing every animal you can think of)!
We'll be back on a regular schedule starting next week. See you then.
Search on!