Dan Russell • December 6, 2016
SearchReSearch
Republished with permission from SearchReSearch
Answer: Mercury where? Dan Russell
Mercury is magical, but it leaves a legacy...
Apparently I wasn't the only kid to play with liquid metal mercury. Many folks about my age (including the ageless RegularReader JonTheUnknown) have spent time pouring mercury back and forth between our hands. Although we didn't know it at the time, fooling around with mercury isn't a great idea.

Mercury in any form is poisonous, with mercury toxicity most commonly affecting the nervous system, the gastrointestinal tract, and kidneys. Poisoning can result from mercury vapor inhalation, raw mercury ingestion, mercury injection, and absorption of mercury through the skin.

Luckily for kids playing with elemental mercury (as seen in the above image) isn't well absorbed through the skin. It happens, but slowly.

90% of any methylmercury ingested is absorbed into the bloodstream from the GI tract. Luckily, handling elemental mercury has relatively low absorption. Whew!

Our mercurial Challenges for this week...

We learn that the Chinese emperor Qin Shi Huang (秦始皇; literally: "First Emperor of Qin"; 18 February 259 BC – 10 September 210 BC) was the founder of the Qin dynasty and the first emperor of a unified China. Reportedly, he died due to ingesting mercury pills, made by his physicians. Ironically, these pills were meant to make Qin Shi Huang immortal. But he was also a bit of a mercury-maniac, using it not just for medicinal purposes, but also extensively in his tomb.

Doing a quick Control-F for mercury in the Wikipedia article about Qin Shi Huang leads us to this:

This is the same emperor whose tomb also contains the amazing terracotta warrior statues. Here's one, but this is only one of thousands standing guard at his tomb, not far from the fabulous rivers of mercury.


And why would he do all this? While the rivers, mountains, and seas were represented on the floor of the tomb, its ceiling was decorated with the heavenly constellations. More importantly, the two major rivers of China, the Yangtze and the Yellow River, were simulated in the tomb using mercury. The rivers were also set to flow into the great sea, also represented in mercury. In this way, Qin Shi Huang could continue to rule over his empire even in the afterlife.

2. At one time mercury was also thought to have nearly magical medical properties. Is it true that mercury was one of the most important drugs that was carried on the Lewis & Clark expedition of 1804 - 1806? Is it also true that you can track the path of the L&C expedition by finding the mercury-laden latrines of the Corps of Discovery as they trekked across North America?

I started with another simple query:

This gives lots of hits, mostly to popular press stories of how the explorers in the Corps of Discovery took mercury-laced purgative pills. (Such as this article in Smithsonian Magazine.) That's nice, but I wanted a more first-hand account. By clicking backwards on links from these articles, I finally found the Lewis-Clark.org site (a site dedicated to the Expedition, written largely by scholars and naturalists) which has a nice article on the medicines used during the expedition.

Dr. Rush had taught Lewis that when one of his men showed the "sign of an approaching disease . . . take one or two of the opening pills." These tablets, also called "Rush's Thunderbolts" for their explosive properties, supposedly had 10 grains of calomel and 10 to 15 grains of jalap, both potent laxatives. (Jalap is a laxative powder made from the roots of a Mexican vine.) By opening up the bowels, Rush believed that the body would then expel the excess bile or other matter causing illness.

With active ingredients weighing at least 1295 mg, these would have been largish pills.

Calomel (mercurous chloride) had entered medical practice in the 1600s as a milder and more version of a mercury compound. Liquid elemental mercury had been applied externally in different forms since ancient times to treat a variety of skin lesions, including the pox associated with syphilis. The apparent success of mercury compounds against this STD helped to spur the growing reputation of chemical medicines.

The pills’ inventor, Dr. Benjamin Rush, was America’s most prominent colonial physician, a signer of the Declaration of Independence and a personal friend of then-President Thomas Jefferson--which explains why they had so many of his pills (1500!) and medicines on their trip.

Reading through the Lewis and Clark site, I found that while latrines with mercury signature are almost certainly mark the site as being on the expedition, it's not a way to track their path. (There's no sniffing device to go from one latrine to the next. Once you have a hypothetical latrine site, you can test it, but it's hard to track from one to the next.)

3. Why is Silicon Valley's local newspaper called the "San José Mercury News"? What's mercury got to do with the news of the area?

The best way to start is the obvious query:

which quickly takes you to the Wikipedia page about the Mercury News. There you find that:

"...The paper says that the name "Mercury" refers to the importance of the mercury industry during the California Gold Rush, when the city's New Almaden Mines (now Almaden Quicksilver County Park) were the largest producer of mercury in North America. The name has a dual meaning, as Mercury is the Roman messenger of the gods as well as the god of commerce and thieves, known for his swiftness, and the name Mercury is commonly used for newspapers without the quicksilver association."

That sounds about right. The Wikipedia article goes on to say that the paper was founded "June 20, 1851; 165 years ago (as San Jose Weekly Visitor)." Okay... so when did it change its name to "Mercury"? And how important was the mercury industry in 1851?

But that opening line irritated me: "..the paper says..." Did it really say that? If so, where? Can I get a confirmation of that?

I thought I'd try to run down this somewhat information-lite citation by doing searches like:

and so on. And I completely struck out. If it's documented, it's not at the newspaper's website (or perhaps it's in a non-indexed part of the paper.

So I went looking for another source. My next query was:

and I found something really useful.

Unbeknownst to me, I discovered via this query that the Google Cultural Institute has a page on the museum History San José as part of its "Museum Partners" collection! In that article it there's a nice history of the Mercury News, which says:

"...Led by John C. Emerson, three businessmen bought their equipment [from a defunct earlier paper] and opened the San Jose Weekly Visitor. Ten years later, it became the Mercury, named for the nearby New Almaden mercury mines, and the messenger of Roman mythology..." (emphasis mine)

Working backwards in the text, you'll see that the previous papers went broke in 1851, meaning that the San Jose Weekly Visitor started in 1851, but was renamed to the San Jose Mercury in 1861.

I feel better about this now. I didn't quite get a citation from the Mercury News itself, but I did find another source of this information from the local history museum (History San José) that corroborates both the date and the connection with the nearby mercury mines.

4. Once upon a time I worked as a research scientist at the IBM Almaden Research Center in southern Silicon Valley. I recently learned that a nearby county park where I would go for long runs used to be a center for mercury production. What is the name of that state park? And should I be worried about my health after running (for several years) through an old mercury mine site?

By this point, I was slightly worried about the possible negative effects of any mercury residue that I might have picked up in my runs.

To find the "nearby state park where I would go for long runs that was a center for mercury production" all you need to do is to search for "IBM Almaden" on a map of San José. Easy. You very quickly discover this county park--Almaden Quicksilver. 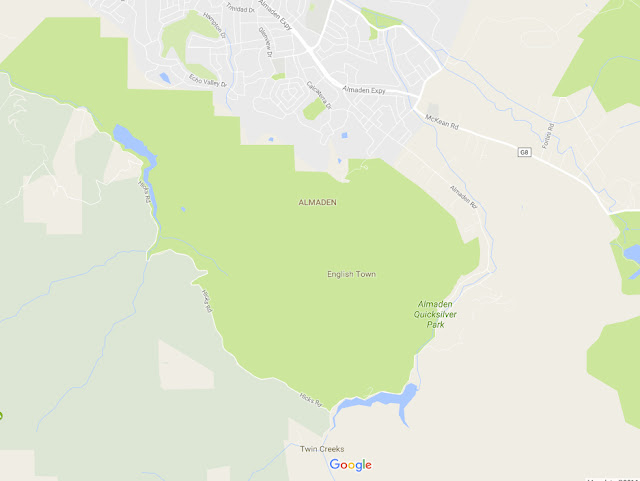 Clearly, searching for [ mercury Almaden Quicksilver Park ] will get a lot of hits. The challenge now is to browse through those hits looking for something that will be of use to understanding the situation.

After just a few minutes of browsing, I was able to find a news article on the hazards of mercury pollution in the Almaden Park (and throughout much of the South Bay).

In the 1980s, the state Department of Toxics Substances Control placed the mine site and park on the state list of Superfund cleanup sites, those most in need of attention. In the mid-1990s, the county spent $6 million on a cleanup. Crews capped the main furnace area in the heart of the park. They planted vegetation, put in rock to protect stream banks from erosion and excavated mine wastes. New Almaden was removed from the Superfund list and it is considered safe for park users.

The good news here is that the dirt and dust is (mostly) under control. The bad news is that the mercury contamination will continue to affect the entire watershed.

But as a runner, I probably won't be drinking too much of the water coming out of those hills. (FWIW, the drinking water in the SF area comes from the Sierras, which has its own contamination sources, but not mercury!) So I'm probably safe!

These questions were fairly straightforward, although getting to the bottom of some of these issues required a bit of reading--which is an important skill. Learning what links to click on--which ones look plausible to have more information, and which are just clickbait--is vital.

I find myself often clicking through to a link (usually opening it in a new tab by CMD+click: learn this skill if you don't know it), and then doing a quick evaluation before deciding if/when/how much time to devote to it.

When you're doing shorter / simpler research tasks, be sure not to rat-hole into topics of marginal interest. (Unless you really want to!)

and the Google Translation of this:


Line from straight to Xianyang, the funeral. Prince Hu Hai Xi bit, for the II emperor. In September, burial began Huang Shan. The beginning of the emperor ascended the throne, wearing governance Li Shan, and the world, the world only send Yi more than 70 million people, wearing three springs, the next coffin made of copper, Palace Guanbai strange strange treasure Zang migration. Make craftsman machine crossbow arrow, have to wear close to those who shoot. To the rivers of rivers and seas for the mercury, machine indoctrination, on the astronomical, under a geographical. Mermaid cream for the candle, a long time immortal. Second, said: "The emperor was not the son of the emperor, out of Yan." All orders from the dead, the dead are very public. Buried already down, or made artisans for the machine, Zang know, Zang weight that vent. Events completed, Zang, closed in the envy, the next outside the envy of the door, make artisans Zang close, no return. Tree vegetation to Xiangshan.