One of the true pleasures of life in the Age of the Internet is our historically unparalled ability to notice something interesting out there, and then using your SearchResearch skills to figure what's the backstory to this interesting thing you noticed.

While I've always noticed the unusual, the strange, the bizzare, and the unexpected, NOW you can do the background research fairly quickly.

I keep notes, and at the end of the day I spend a few minutes to look these things up and write them down in my notes with a little label of #TILT, Things I Learned Today. (The #TILT label is really handy because I can then search for these things fairly simply--I just for for #TILT and a keyword or two from the thing I looked-up. Incredibly handy.)
This week had more than the average number of TILTs.

● First, there were several news articles about electric eels jumping out of the water to shock their prey. Really? That sounds unusual / strange / bizarre & unexpected all at once. What's the backstory here? Do eels really do that? (And of course, what other kinds of fish do that as well?)

1. What other kinds of fish leap from the water to attack their prey?

A straightforward search for:

brings a bunch of articles about electric eels that, when attacking a large animal, actively leap out of the water to touch their chins to the body of the prey animal while the rest of their body remains in the water. (The better to focus the effect of the electrical discharge into their prey.) The original report on this shocking eel behavior is from the National Academy of Sciences, and mentions Alexander von Humboldt's story of electric eels attacking horses that had been herded into a shallow, muddy pool. You can read the original account of the story in the book The Travels and Researchs of Alexander Von Humboldt (by Von Humboldt himself, 1833; see also The Invention of Nature: Alexander von Humboldt's New World, Andrea Wulf, 2015)

The naturally curious mind wonders if this is something that's peculiar just to electric eels, or to fish (and other aquatic creatures) more generally. A great search to do here is:

Notice that if you try a couple of variations on this search, you'll get somewhat different results each time. (The better with which to scan the universe of possibilities.) Try alternates such as [ fish jumping out of water ] [ fish jumping to attack prey ] and so on.

I quickly learned about the needlefish (which apparently dive bombs prey from the air, leaping out of the water to avoid detection) according to a report in New Scientist, and of course, the completely remarkable African tigerfish, which can leap from the water to catch low-flying swallows mid-flight. (Article in Nature.) They published this video, which is pretty amazing of this swallowed swallow:


As I read, I also learned about the arowana which can leap up to 2 meters out of the water to capture small prey (video of an arowana catching a spider, see: 3:11).

There are reports of sharks leaping out of the water, but as far as I can tell, they're not doing that to attack prey that's not in the water, but are attacking prey on the surface (such as a seal), and then driving up into the air as part of their follow-through.

But, much to my surprise, there are a number of fish that leave the water to attack their prey. Who knew?

● I also saw a YouTube video that mentioned the use of X-rays to destroy hair follicles to permanently remove hair from your body. (Note: This turned out to be a really bad idea.)

2. What other interesting / odd uses did people (unwisely) use X-rays for during the past 100 years? (You don't have to list them all, just one unusual use that you didn't know about before.)

There are many approaches to this Challenge. My first search was for:

(although others work as well). I decided to search for "historic" rather than "unusual" or "weird" because I didn't want to find lots of strange x-rays, but I wanted to focus on the uses of X-rays, and since most of the recent uses are primarily vetted (and mostly not odd), I figured that the historic perspective would be useful.

I used ... xray OR "x-ray"... since I wasn't sure how people would have written about this in the past. (Just being careful.)

Looking through the list of results, I found a few really interesting things. Here's a quick list of things I found interesting:

a. Xrays for shoe fitting: Yes, X-rays were once use to see if your shoes fit. Sounds great (and if you don't know that X-rays are potentially harmful, it would seem to make sense)! 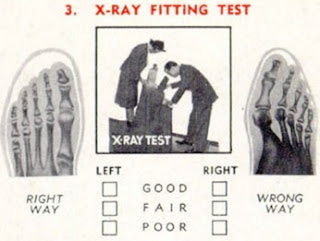 b. X-rays as a medical therapy: Back when Xrays were novel and not well-understood, many things that had radioactivity (in any form) were thought of purely as medicine. Kohler's Antidote offers X-rays as a treatment for headaches. Oddly, the real treatment was a pill labeled with the word X-Ray, and didn't actually include anything radiological. Why? Because "X-ray" was a magical, hi-tech term at the time, a bit the way "laser" was back in the 1980s. (Or "cyber" in the 1970s, etc.)

There was also a great use of radiation therapy in general. The Wikipedia has a fascinating history of radiation therapy that covers everything from "radium waters" through Röntgenotherapy (another name for X-ray therapy), including the discovery that radiation can cause hair loss. Which brings me to...

c. Hair removal: Since one of the side-effects of x-ray treatment is that your hair falls out. This led to a real growth industry in using x-rays to cause focal hair removal. By 1924 the "Tricho System Sales Corporation" came into being (see their ad below). 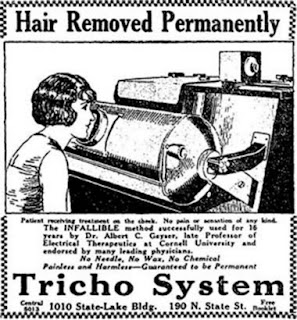 Of course, this was a bad idea as well. By 1970, US researchers were attributing over one-third of radiation-induced cancers in women to X-ray hair removal. ("Nothing but a ray of light" by Paul Collins; New Scientist; September 8, 2007; pages 68-69.) 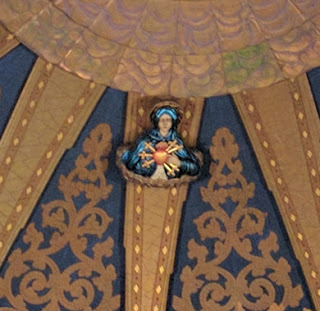 3. I saw a concert at a church with this on the ceiling. What's the name of the church where the concert was held?

Since I recognized that this was a depiction of the Virgin Mary, and if you look closely, there seems to be 7 knives (or swords, or something) that's piercing the heart. So my query was:

A quick scan of the SERP tells me that this is a depiction of "Our Lady of Sorrows," a carving of the Seven Sorrows of Mary, each of the swords (or daggers) stands for one of the sorrows she experienced.

But WRT the name of the church, there are many Catholic churches named for "Our Lady of Sorrows," but if you look at the Wikipedia page, you'll see (near the end) "Mission San Francisco de Asís in San Francisco, California, known also as Mission Dolores."

If you then search for:

you can find there are a number of concerts, so it seems plausible that I would have gone to the Mission San Francisco de Asís...

But (and I didn't realize this would work until after I'd written the blog post), an Image search shows a link to the wood carving sculptures of Samuel Berger, which shows definitively that this particular carving of Mary was done by Berger, and placed in the Mission Dolores.

1. Don't forget about reverse image search. Since I took that photo of Mary late at night and under not-exactly-optimum conditions, I didn't think image search would work... but I was totally wrong. (I only tried it later, and discovered the wonderful carving of Samuel Berger.) But don't forget to try it!

2. Don't forget about image search for complex concepts. Although I solved the X-Ray problem by using ordinary search, I later discovered that doing those searches and then checking out the Images results often would lead me to some other kinds of fascinating results.