Dan Russell • March 13, 2017
SearchReSearch
Republished with permission from SearchReSearch
Answer: Looking up quotes Dan Russell
Face it: Tracking down quotes was never easy...
As I said last week, it used to be that when you heard a quote you liked, you looked for it in one of those big books of quotations (such as Bartlett's Familiar Quotations or the Yale Book of Quotations).

But, if it wasn't in there, then most people just up because the searching got to be a LOT harder. In the days B.G. (that is, "Before Google") finding the correct attribution for quotations required lots of contacts, a lot of reading, and dedicated time.
Searching is very different now. But still tricky, especially when you find things like this in the search results (try searching for ["quotes on the internet"] and you'll see what I mean). 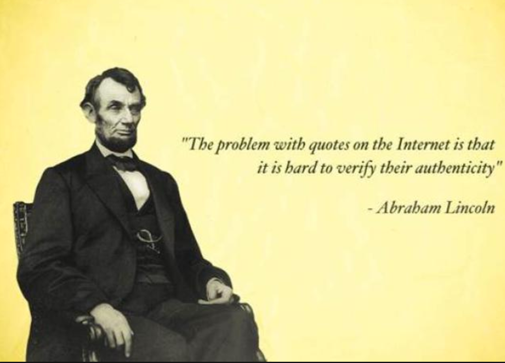 So... what DO we do now to track down quotes? Let's look at the quotes for this week.

1. Did Tom Peters, the guru of excellence, really say "The best search one can do today is the search for excellence"?

The obvious first query is this:

The problem with long phrase searches like this is that you often there will be a typo or variation on the quote that wormed its way in over time. This will mean you'll NOT find the quote because the search is too precise.

If you (or your source) got the quote slightly wrong, e.g., you misspelled "excellence" with only 1 L--"excelence"--then you'll get a "no results found," and then something that looks like this:

Naturally, if you click on the second link ("search instead for.."), you'll get zero results. Not a surprise.

Generally speaking, the best approach is to NOT trying to do a quote search of a long phrase. A much better approach is to search for a nugget--that is, some small fragment of the text that is memorable, and unlikely to be be changed over the different variations.

So instead of a full phrase search, I searched for the nugget, which in this case I chose:

[ "today is the search for excellence" ]

Why did I choose this funny sub-quote? Because the other options, "the search for excellence" has too many off-topic hits, and the other option, "the best search one can do today," has the same problem. In this case, I choose the phrase from the words "today" through "excellence" to capture the central searchable nugget.

When you do this search, the first hit is to the Quote Investigator, a well-known website that's well known for its high quality and accurate research into the origins of quotations.

In the Quote Investigator's page about "today is the search for excellence," we find the attribution to Lyndon Johnson, and his article in a Sunday newspaper insert (specifically, The Des Moines Sunday Register, 1964 April 26, Sunday supplement).

But the quote isn't exactly the same as what we're searching for; LBJ's original phrase was:

The noblest search of today is the search for excellence.

vs. what we said we were looking for:

The best search one can do today is the search for excellence.

But since we didn't get ANY hits for the exact version ("noblest search"), I suspect that somehow something got changed along the way.

This kind of thing happens all the time to quotations (they get slightly altered over time to be slimmer or punchier). This, and many other observations about how quotations transform over time, are beautifully written up in The Quote Investigator's forthcoming book, Hemingway Didn't Say That: The truth behind familiar quotations, Garson O'Toole.

While I have high regard for the Quote Investigator, I couldn't stop myself from fact-checking his attribution. I found the Des Moines Sunday Register on Newspapers.com (a paid-subscription site, which I use often enough to be worth it). Here's the original image scan:

Although LBJ was a controversial president, his hope for "the noblest search of today is the search for excellence..." is something deeply to be desired in our current political climate.

So no, it wasn't Tom Peters, but President Lyndon Baines Johnson, writing in 1964.

2. Did Mark Twain say that one should "Put All Your Eggs in One Basket, and then watch that basket"?

So what's the "nugget" of this quote?

In this case, the quote is relatively short, so let's just try the whole thing:

note that I DID NOT include Twain in the search. Even though this sounds rather Twain-like, including his name in the search builds bias in the result set. (In my classes I say "It's like a lawyer leading the witness during cross-examination." Don't do it.)

You have to be careful with the results here. There are a LOT of pages that attribute it to Mark Twain, and just about as many attribute it to Andrew Carnegie. But very, very few of them actually give the source.

The concerns which fail are those which have scattered their capital, which means that they have scattered their brains also. They have investments in this, or that, or the other, here, there and everywhere. “Don’t put all your eggs in one basket” is all wrong. I tell you “put all your eggs in one basket, and then watch that basket.” Look round you and take notice; men who do that do not often fail. It is easy to watch and carry the one basket. It is trying to carry too many baskets that breaks most eggs in this country. He who carries three baskets must put one on his head, which is apt to tumble and trip him up. One fault of the American business man is lack of concentration.

Carnegie wasn't one to let a good line be used only once, however, and variations of it appear in other speeches that he gave. In the book The ceremonies attending the opening of the Washington, D.C., Public Library building : presented to the city of Washington by Andrew Carnegie : dedicated January 7, 1903. Carnegie Institution of Washington. (1902) (Doubleday Publishers), Carnegie says:

"In my first public address made to our young men, in Pittsburgh—how many years ago I need not mention—I told them to put all their eggs in one basket and then watch that basket. I have been a concentrator all my life."

It's pretty clear he, or a clever speechwriter, came up with this quotation. Notice that he simplified and shortened the key phrase. It's now just 12 words long, while the original was 26 words long. This happens to many quotations--they become slimmer and punchier over time.

3. Who said that "College contains daily exercises in delayed gratification. 'Discuss early modern European print culture”'will never beat 'Sing karaoke with friends' in a straight fight, but in the long run, having a passable Rhianna impression will be less useful than understanding how media revolutions unfold"?

This is another really long quote. So for the nugget, I'd pick "having a passable Rhianna impression" (which seems like a pretty unlikely sequence of words).

Note that the singer's name is misspelled. (It's really Rihanna, not Rhianna as it appears in the quote.)

But searching for that quotation nugget:

[ "having a passable Rihanna impression" ]

quickly gets you to Clay Shirky's post on Medium.com where he writes about being distractable, what it takes to get focus, and why delayed-gratification is an important personality trait to develop in yourself. His essay is a brilliant comment on why staying-focused is a key skill... and why he asks that his students put away their laptops during his class. As he writes: "I’ve decided it’s time to admit that I’ve brought whiteboard markers to a gun fight, and act accordingly."

And in one of the cleverest sayings ever, Shirky's tagline for his post is this:

Note the missing final "e" on that tagline. Shirky is too careful a writer for this to be a typo. I think he's signalling the effects of being distracted. Someone else might have pointed to the animated movie "Up" and said "Squirrel!"

But the author is clearly Clay Shirky.

4. (Extra credit) Who said or wrote that "It is better than 1000 guilty persons should escape than one innocent suffer"?

Here, I used the nugget "better than 1000 guilty persons should escape" -- but just as I was about to enter the quote into the search box, I noticed that the word "than" probably should be "that"--it would make more sense.

Still, quotes are sometimes not obvious, so I did that phrase search as is... and got nothing.

Okay, fixing up the "than" to "that" I redid the search and found that Google couldn't find the exact quote, but something near to it: 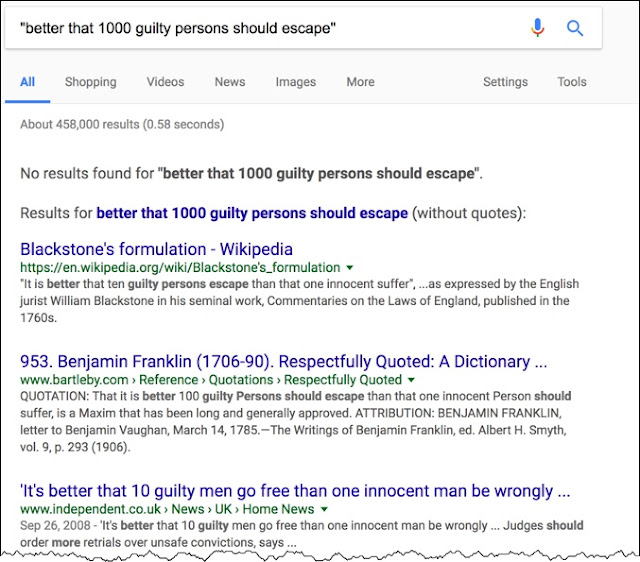 We see that both William Blackstone AND Benjamin Franklin are given credit for this... although with different numbers that what our quote says. Blackstone: 10. Franklin: 100. And the last quote says "men" rather than "persons." I suspect some quote evolution here.

So let's check both Franklin and Blackstone. With the query:

I was quickly led to Franklin's Autobiography (p. 370), which is most easily text searched in the Hathi Trust's version. In there I found that in a letter from Franklin to M. le Veillard, April 15, 1787 he writes:

“You were right in conjecturing that I wrote the remarks on the Thoughts concerning Executive Justice. I have no copy of those remarks at hand, and forget how the saying was introduced that it was better 1000 guilty persons should escape that one innocent suffer.”

However, a quick search on "The Commentaries on the Laws of England" tells us that they are an influential 18th-century treatise on the common law of England by William Blackstone. Most importantly, they were originally published by the Clarendon Press at Oxford, 1765–1769. The work is divided into four volumes, on the rights of persons, the rights of things, of private wrongs and of public wrongs. By doing a search in Google Books for Volume 4 "Of Public Wrongs," and by doing the obvious search within that text I found the quote we seek:

As several Regular Readers pointed out, this 10:1 ratio is known in legal circles as Blackstone's Formulation. As the Wikipedia article points out, "Other commentators have echoed the principle; Benjamin Franklin stated it as, "it is better 100 guilty Persons should escape than that one innocent Person should suffer." " He made the number a bit larger than Blackstone, the better to make his case.

But in this case, Blackstone published first. He put forth the idea in Volume 4 (the publication date is a little uncertain--but certainly between 1765 and 1969), while Franklin could not have written his "Remarks" until after 1785, around twenty years after we know Blackstone already wrote about this.

1. When searching for a long quote, search for the shortest "nugget" that contains the essence of a quotation. Picking this nugget out of a long quote is often a matter of looking for the "least like part to have been changed" (you know, the pithy, interesting part of the quote), and then keeping that searchable phrase as short as possible.

2. When looking for a quote, don't accept someone's attribution (unless they're really well-known for getting it right). Generally speaking, you want to see the original text (or a clearly correct transcription of the spoken word). There are relatively few places that I'll believe got the author attribution correct (the Quote Investigator, Snopes, FactCheck... places that have a strong reputation in getting the facts right).

3. Bear in mind that quotes often shift in length, spelling, and details. In many cases, the quotation tends to get shorter, pithier, and ascribed to even more famous people. We saw all of this happening in this week's searchable quotations.