Dan Russell • February 15, 2017
SearchReSearch
Republished with permission from SearchReSearch
Answer: Large numbers of ladybugs and dogfish? Dan Russell
Masses of animals fascinate...
Birds, bugs, mammals--when they all get together in vast quantities, they amaze us.

This week we want to search out two particular kinds of swarming animals to get a sense for how many of them move en masse together, and how they're doing these days.
As I mentioned, I've seen fairly large numbers of ladybugs gathering on stone walls in Yosemite: 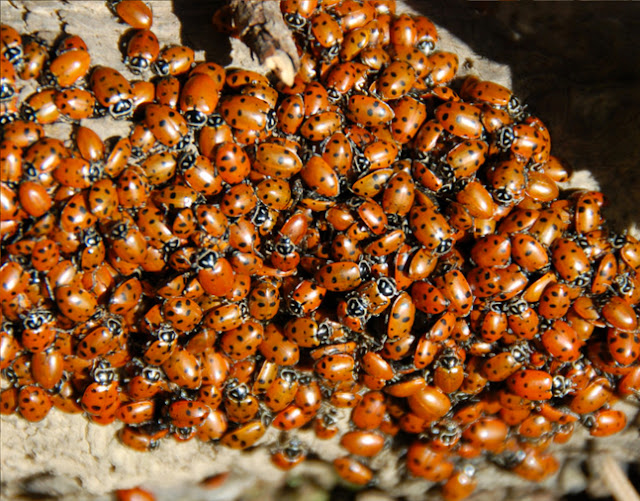 Now imagine this same kind of ladybug swarm extending for another 20 meters down a long, low, granite stone wall...

1. What's the largest ladybug grouping together that you can find? (Or a swarm, or a loveliness of ladybugs, although that mass noun is disputed.... but it's such a great term!)

Even though "loveliness" is a great term, the fact that it's disputed suggests that it's probably NOT a great search term. In this case, let's start with the simplest possible query:

(For the record, I tried aggregation first instead of swarm. But aggregation seems less commonly used.)

With this search I found the Wikipedia page about ladybugs (of course) about quickly learned that they're called Coccinellidae (the scientific family name), they enter diapause (a kind of overwintering hibernation), and that many species collect into large swarms at diapause time. In fact, the Wiki page has a great photo of ladybugs emerging in the spring from a diapause swarm at Stevens Creek, which runs right along the edge of the Google campus in Mountain View, CA.

Apparently, some ladybug species like to spend diapause at higher elevations (e.g., Yosemite). That connection led me to Summitpost.org (a mountaineering website with lots of observations about high-altitude mountain phenomena) with article about ladybugs diapausing. They write that "Many ladybug dealers/collectors claim that some of these mountain colonies can contain as many as 500 gallons of ladybugs, with each gallon containing up to 72,000-80,000 ladybugs..." To first order, that's around 40 million ladybugs in one swarm... but it also told me that there are "ladybug collectors," which might be a promising line of research.

(I had to add "insect" to the query to avoid all of the "ladybug collectors" of jewelry websites.) But once I did this, I found even more sites talking about mass quantities of ladybugs.

In short order I found one report from Boulder, CO (with a picture similar to that above), and yet another article that mentions ladybug dealers/collectors that can harvest millions at a time with snow shovels and buckets.

That article led to the website of the Lost Ladybug Project (run by the entomology department of Cornell University). This research project is dedicated to understanding what's happening the ladybugs in North America, and why some ladybug species are becoming rarer, while other are moving their range.

As you'd expect, I did a search of that site for both diapause and swarm:

As I skimmed this paper, I noted a particular phrase written by J. L. LeConte in 1850 (see reference [1] below):

‘‘..they [ladybugs] were driven on shore, particularly on sand beaches, by the winds and waves after being drowned in the lake..’’

I think I just found the answer to the next Challenge...

2. While you're thinking about ladybugs in large groups, sometimes vast numbers of ladybugs somehow die-off together. Can you find out how / when / why this happens? What are these mass die-offs called? (In the special case of ladybugs, there's one particular term that's used.)

Although I wasn't directly looking for this paper, I found it while searching for the large ladybug swarms. When the text mentions masses of drowned ladybugs, I naturally get curious. How can this happen?

This paper ("Causes and consequences...") is by Denemark and Losey. Those names also rang a bell. Where had I see them before?

I had just been looking at the Lost Ladybug Project and remembered seeing those names listed on their About page. This is a pretty reputable journal about entomology, and these two folks are deeply into ladybugs.

You can read the paper yourself, but it basically looks at ladybug washup data for the Finger Lakes (in upstate New York), and makes the case that:

"...The frequency, composition, and duration of washups in the Finger Lakes support the hypothesis that a weather condition known as a lake breeze forces coccinellids [ladybugs] to fall into the water. These animals subsequently arrive on shore in large numbers."

The last section of the paper summarizes their findings and gives some important context, including a subtle reference to a paper "Ladybird population explosions" by Majerus and Majerus (1996) [2] ("Ladybird" is what the Brits call "ladybugs.")

That looked interesting, so I went to Google Scholar with the title and found the paper on the "Food and Agriculture Organization (FAO) of the United Nations" website. As I scanned it looking for information about ladybug washups, I found this stunning paragraph and tag line:

We once calculated the approximate number of ladybirds that would have been in the tide-lines along the southern and eastern coasts of Britain on a single day in late July 1976. Assuming all to have been one of our larger species, the 7-spot (which they were not), a conservative estimate gives a figure of some 23,654,400,000 ladybirds (estimated by counting the number of 7-spots in 15 200 mm sections of tideline and multiplied up by the amount of suitable coastline between Land's End and the east coast border between England and Scotland). This figure is difficult to comprehend, but it is about four times the current human population of the Earth and, of course, this was just the ladybirds in the tidelines on a single day. It does not include any of those that stayed on land, or those that were washed out to sea, or those that were eaten by other starving ladybirds or other predators, or those that were killed on the roads or elsewhere by the devices of man.

Not surprisingly, a crash in ladybird populations followed.

Wait a second. That's 23 billion ladybugs that washed-up on the shores of the British Isles.

Now that's a loveliness of ladybugs...

For a great video about more everyday ladybug aggregations, watch this short (created by the local PBS station--this is a great video series, well worth subscribing to):


3. The spiny dogfish (Squalus acanthias) is a remarkable fish. Like many fish, they often school in large numbers. What's the largest report of a dogfish school you can find?

I did a few obvious queries:

And with these queries it's easy enough to find multiple sources that report schools of dogfish in the thousands (e.g., University of Michigan animal web, the FAO United Nations page on dogfish, or Fishbase).

With comments about dogfish being the most abundant living shark, and the only shark species that supports fisheries of a size rivalling those of the more commercially important bony fishes. Bigelow & Schroeder (1948) noted that in a time of peak abundance in 1904-05 an estimated 27,000,000 dogfish were taken off the Massachusetts coast each year.

So... why "dogfish"? The name "dogfish" was adapted by fishermen who referred to the schools of them chasing schools of smaller fish as "packs."

The lifespan of a dogfish is estimated to be between 20 and 75 years. It's a very long-lived fish that matures late and reproduces slowly, with gestation lasting two years – the longest of any vertebrate. It's ovoviviparous, meaning that spiny dogfish develop in eggs within the female, living off their yolk sacs. For each female, six to seven live young are born, measuring 20 to 33 cm. At birth, the mother shark has a series of rhythmic contractions, just as in mammals, and the young are delivered head first. Larger and older females have bigger litters with larger pups; a large female can carry up to 4 times as many embryos compared to a smaller female. Larger, older females have higher survival rates than those born to small females.

As a consequence, despite their large numbers in schools, dogfish are vulnerable to being overfished. It takes a long time for a crashed dogfish population to return.

I was curious about what large schools of dogfish had been observed. Anything more than "thousands"?

and then varied the adjective (trying "gigantic" "massive" etc.)

Notice that I had to add the term "squalus" to eliminate all of the dogfish results having to do with beer (there's a popular brand named "dogfish"), pubs, B&Bs, etc.

I found several more references to "thousands" of dogfish in schools, including a personal observation of fishing vessels pulling up overloaded nets full of nothing but dogfish. (see: "Development and observations of a spiny dogfish...")

But there are hints at truly massive schools of dogfish. When I started by queries with this variation:

I found one article ("The Spiny Dogfish--a Review" published by NOAA) that quoted the Cape Ann Advertiser of February 10, 1882 as saying that: "Immense schools of dogfish,extending as far as the eye can reach, have appeared off Portsmouth, an unusual sight in winter... "

This version of the query proved to be really productive, as it led me to the most remarkable work in the spiny dogfish oeuvre, that being the monograph The Spiny Dogfish (Squalus acanthias) in the Northeast Pacific and a History of its Utilization, by K. S. Ketchen (1986), published by the Canadian Fisheries and Aquatic Sciences. (It really is a good read. The section on the history of dogfish utilization is fascinating. It includes such tidbits as Native American dogfish art, including totem poles, and how dogfish oil was used in coal miner lamps in British Columbia.)

In this remarkable text, anecdotal evidence spiny dogfish schools in in Queen Charlotte Strait can be found in a remark of Syd Cooke, then editor of Western Fisheries magazine:

Clearing from Hardy Bay, and while on the approximate 39-mile course to Shushartie Bay, on the northern end of Vancouver Island, we ran through a dogfish school which extended for that distance, and as far as the eye could see to seaward. (Western Fisheries Magazine, Mar. 1946)

As the ichthyologist Milton J. Love later wrote about this observation, "Heh, that is a powerful lot of dogfish."

1. You might have to try different variations on a search term. In the ladybug example, I tried both "aggregation" and "swarm," and got different (and usefully different) results. In the dogfish Challenge I tried variations on the adjective: gigantic, enormous, huge... When I finally tried "immense" I found some really useful results.

2. Double source everything. In this case, it was pretty easy to get multiple articles that said the same thing (e.g., "dogfish schools with thousands of fish"). Importantly, they were all reputable sources--biology departments of universities and the like. Also importantly, they did NOT repeat the same information word-for-word. If you see that (and you will), you can't count the copied text as another independent source. (It just means they copy/pasted the finding.)

3. When getting lots of spurious results, try adding in a technical term to get more on-topic focus. When I did the search for [ dogfish school ] I had to add in "squalus" as a search term, just to remove all of the commercial results for beer and vacation spots named after the fish. They like dogfish alright, but they never use the term "squalus"!

[1] Lake Superior: its physical character, vegetation, and animals, compared with those of other and similar regions, Louis Agassiz, James Elliot Cabot, 1850. Quote from Leconte's chapter, "General Remarks upon the Coleoptera of Lake Superior," page 201