Answer: Is that true? 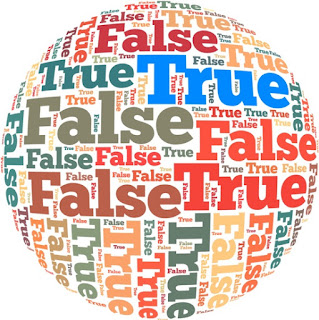 Answering these three questions was pretty straightforward. But as I discovered in the comments, our Regular Readers went farther into these topics than I ever imagined. Bravo, Readers! Bravo!

Let's see what we can discover to answer these Challenges.

1. Is it true that some kinds of female sharks use only one ovary to produce eggs? (That is, only one ovary actually produces eggs, the other is just kind of there?)

I started with a simple search that focuses on the question:

[ sharks only one ovary ]

I assume that if this was true, then anyone writing about it would probably write about "only one ovary." I didn't search for a quoted phrase ("only one ovary") so as to not over-limit the results. Google prefers words that are in the order presented in the query. So the phrase only one ovary would be prefered over those same words scattered all over the page.

In any case, this search led me to the paper Morphological analysis and description of the ovaries of female silky sharks, Carcharhinus falciformis in the journal Neotropical Ichthyology, 11(4):815-819, 2013. In this paper the authors write that:

In several elasmobranch species, only one ovary is functional. Such is the case of the species within the genus Carcharhinus, Mustelus and Sphyrna. Oviparous species have both ovaries developed and functional, such as of the species Pristis cuspidatus and Squalus brevirostris.

Interesting. Some sharks have only one working ovary while some have two.

This is definitely something to second source. I recognize the name Carcharhinus as the genus name for Requiem sharks (a kind of shark that includes Tiger sharks, Silky sharks, Blacktip sharks, etc.).

I thought I'd try to confirm this uni-ovary characteristic in Requiem sharks by searching for:

which led me to the Wikipedia entry on Blacktip sharks (a kind of Requiem shark). In there we not only confirm that Blacktip sharks have only one functional ovary, but also that...

Females have one functional ovary and two functional uteri; each uterus is separated into compartments with a single embryo inside each. The embryos are initially sustained by a yolk sac; in the 10th or 11th week of gestation, when the embryo measures 18–19 cm long (7.1–7.5 in), the supply of yolk is exhausted and the yolk sac develops into a placental connection that sustains the embryo until birth.

More interesting! Two working uteri, AND the shark starts off life with a yolk sac (as part of an egg) and then changes that yolk sac into a working placenta! Sharks are amazing creatures, in many ways. Including, apparently, working other kinds of natal miracles.

In 2007, a 9-year-old female blacktip shark at the Virginia Aquarium and Marine Science Center was found to be pregnant with a single near-term female pup, despite having never mated with a male.

As evidence, see: Chapman, D.D.; Firchau, B. & Shivji, M.S. (2008). "Parthenogenesis in a large-bodied requiem shark, the blacktip Carcharhinus limbatus". Journal of Fish Biology. 73 (6): 1473–1477. The second sentence of that article is a doozy. "The parthenogenetic embryo exhibited elevated homozygosity relative to its mother, indicating that automictic parthenogenesis is the most likely mechanism." That is, the baby is more-or-less identical to its mother, which tells us that no boy sharks were involved in the making of this pup.

AlmadenMike points out that this fact has been known for quite a while. For example, on page 1461 of this book published in 1842 (Elements of Physiology, Part 2, Volume 2 by John Müller) we find that biologists have known about single-sided working ovaries in both some sharks and some birds.

But Remmij found a fantastic video of a dogfish dissection showing the location of the ovaries (remember dogfish from our earlier SearchResearch Challenge?). Unlike mammals, female sharks have their ovaries in the same body location as male sharks have their testes. (Don't watch this if you're squeamish; but if you don't mind watching a fish being scissored open, it's really quite interesting.)

2. Is it true that tinnunculite is a real mineral? If so, what does it have to do with kestrels (the raptor)? (I ask because I recognize the name tinnunculus as the species name of the European kestrel. If it's real, what's the connection?)

This was an interesting search! Just doing the obvious search:

gives us a spelling correction and lots of information about kestrels.

That's fine, but I want to learn about the mineral (if it exists). I had to quote it:

to get a good result. When I do this search, I find that Wikipedia tells us that it is a "naturally-occurring mineral that forms when droppings from a European kestrel react with the burning dumps of coal mines and quarries." It's formula is C5H4N4O3 · 2H2O

The article then tells us that "The mineral is a dihydrate of uricite to which it is visually very similar. Tinnunculite is chemically similar to other organic minerals: guanine, uricite; also acetamide, kladnoite. A mineral of the same name but different formula (C10H12N8O8) was rejected by the IMA/CNMNC."

Hmm. This sounds suspicious. But following up on other results quickly leads us to the Mineralogical Society's page on the substance, which tells us that it is now approved (as a formal mineral name) pending publication. (For full details about the controversy, read AlmadenMike's masterful summary of the debate in the comments of the Challenge.)

In the end, this is actually a mineral of anthropogenic origin (that is, caused by human activity, even though it's really kestrel poop interacting with burning coal--since people caused the coal to catch fire, its considered human-caused, even though as we found in an earlier Challenge, not all long-lasting coal fires are started by humans).


3. Is it true that the journals Science and Nature are going to team up and form a new journal together? (They have long competed to be the world's preeminent scientific journal, so this was a surprise to read.)

I did a search for:

and found an article on the Science journal site discussing the potential new journal. 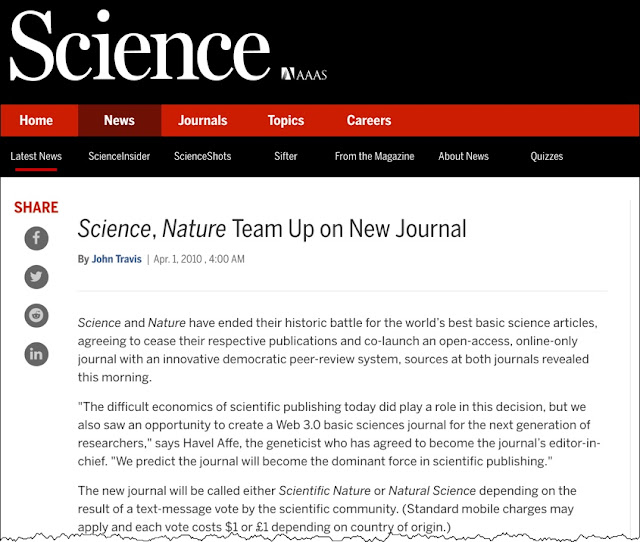 But notice a couple of things about this article. First, it's written by a well-knwon science writer John Travis. That checks out. But the tone is off and the premise is pretty surprising. Both journals will cease publication? And they haven't decided the name of the new journal, but are letting text-messaging votes determine the name?

Then the rest starts to make a jokey kind of sense: "... the first 100 new subscribers will get free genome scans" and the article quotes a magazine consultant named Rick Rolling (and offers a link to the Wikipedia page for that Internet meme).

It's handy to know that "Science" has a long tradition of April Fool's Day articles that pull your leg. This is one of those.

So no, the journals are not planning on merging.

1. Not everything you read on the internet is true. Yeah, I know... WE know that, but it's useful to remember that not everyone is quite as discerning. In this case, we found that ever articles from respected journals sometimes need a bit of careful reading. (Especially in April!)

2. Double quoting a single word turns off spell-correction. That's how we had to get to the Tinnunculite results.

3. A strategy for checking on a complex idea is to check a specific case. That's why I checked for the "one ovary" just within the Requiem (Carcharhinus) shark species. If it was true of the entire genus then someone, somewhere must have written an article about that large and distinguished genus of sharks.