Answer: How much background knowledge should you have?

Dan Russell • June 6, 2016
SearchReSearch
Republished with permission from SearchReSearch
Answer: How much background knowledge should you have? Dan Russell
Why do you need to know stuff?
This is a question I often get from students and from people who don't do much research. If you spend any time actually doing research, you realize that it's crucial for you to have the ability to recognize things and their properties... and the ability to know how things link together.

In other words, there are things you should just be able to recognize and know. Likewise, if you know these things, you should have enough cognitive mechanisms to figure out other properties and relationships off the top of your head. The way I framed this last week was like this: What should those basic pieces of background knowledge be?

But this is fairly abstract. Let's get down to brass tacks with some examples.

In the Pre-Challenge I asked a few questions that asked about world facts. I chose them on purpose so that you'd understand the question and have some intuition about the questions, but about 50% of people would get them right. Let's go over the questions and how to answer from SearchResearch, then talk about what people answered in the survey.

Here's what I asked:

1. Based on what you know about the Earth and its movement around the Sun, approximately how far does the Earth travel around the Sun in one day? (In miles or kilometers.)

For extra credit: About what angle does it traverse? (In degrees.) You should be able to figure the angle without looking up anything! 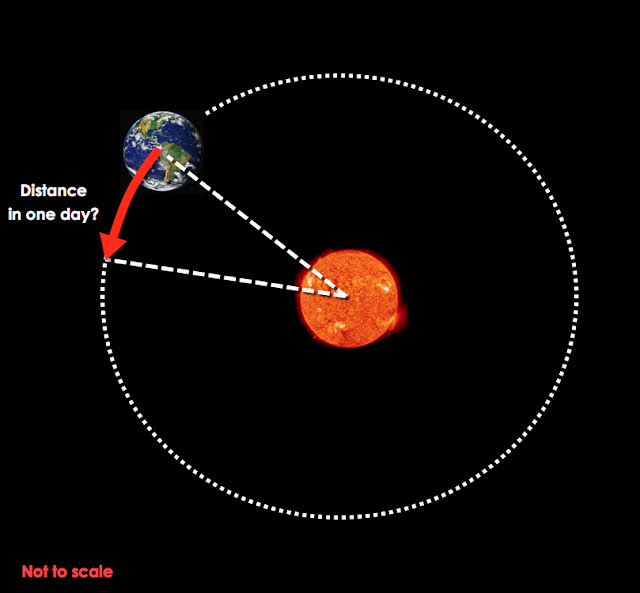 In other words, looking at the diagram above, how far does the Earth travel along that arc in 24 hours?

If you think about it, we're trying to estimate the length of the red arc in that diagram. We know that one revolution around the sun takes 365.25 days (something you just gotta know), and that the average distance from the Earth to the Sun is close to 93,000,000 miles (or 150M km; again, something you have to know).

I can't quite do that math in my head, so a quick estimate (using my numerical estimation skills to guessitmate the value of 558/365) which I estimated to be 1.5M miles.

The point is... That you can estimate these numbers pretty quickly IF you know a few basic things. Let's list these out:

a. how long it takes the Earth to circle the Sun
b. radius from Earth to Sun
c. math formula for circumference (which you should have learned in the 6th grade)
d. math estimation skills

Knowing these basic facts lets you figure out all kinds of basic properties of the world.

Let's try the second question, and call out exactly what you need to know to solve this one.

2. At home I have a Wifi system that's running at 10 Mbps in the upload direction. Ignoring all other sources of delays, how long should it take for me to upload a 2 Gigabyte file?
Let's assume a 2 Gigabyte file is 2 billion bytes long. (It's not really, but see the footnote below).

When doing calculations like this, be sure you know your terms. In this case, what does "Mbps" stand for? Turns out that it means "mega-bits per second." Why is this important? Because MBps (note the capital "B") means "mega-bytes per second."

A byte is 8 bits long, so a 1 Mbps connection is 8 times slower than a 1 MBps connection.

What this means is that a 10MBps connection is 8 times faster than a 10Mbps connection. If you don't know that, you might underestimate the total speed!


3. Consider these former colonial countries: Brazil, Canada, Mexico. Which country got its independence first? Which was second? Which was third?
How good IS your knowledge of international events? In the US, it's common to know very little about how other country's histories have gone. (Well... aside from knowing a bit about the history of the UK, and perhaps Germany, Japan, Korea, and Vietnam...)

I admit that my guess was based on what I know about Canada and Mexico (having visited both places, I know a bit more than average about their histories). And I had a good guess about Brazil... but I also wasn't quite sure about the year for Brazil.

The obvious queries quickly clear this up:

Canada Day (French: Fête du Canada) is the national day of Canada, a federal holiday celebrating the anniversary of the July 1, 1867, enactment of the Constitution Act in 1867 (then called the British North America Act, 1867), which united three colonies into a single country called Canada within the British Empire. Originally called Dominion Day (French: Le Jour de la Confédération), the holiday was renamed in 1982, the year the Canada Act was passed

The Independence Day of Brazil (Portuguese: Dia da Independência), commonly called Sete de Setembro (September 7th), is a national holiday observed in Brazil on September 7. The date celebrates Brazil's Declaration of Independence from the United Kingdom of Portugal, Brazil and the Algarves on September 7, 1822.

The Mexican War of Independence (Spanish: Guerra de Independencia de México) ended the rule of Spain in 1821 in the territory of New Spain. The war extended from the Grito de Dolores by Father Miguel Hidalgo y Costilla on September 16, 1810, to the entrance of the Army of the Three Guarantees led by Augustín de Iturbide to Mexico City on September 27, 1821. (Eleven years later!) While independence took some time to achieve, September 16 is celebrated as Mexican Independence Day.

The interesting thing here is that Mexico and Brazil gained their independence very close together in time. Obviously, the middle 1800's were a time of great trials among the colonies.


4. Could George Washington (the first President of the United States, and a great music lover) have heard the music of Joseph Haydn?

Off the top of my head, I knew that Washington and Haydn (a famous early classical composer) were pretty close in age (but then, I've studied a fair bit of music and remembered the dates of some of Haydn's compositions). I also knew that there was a fair bit of contemporary music in the world of Washington, so I thought it was a pretty good chance that Washington had heard Haydn at least once.

Just looking up both:

showed me that they were both born in 1732 and had the main part of their careers at about the same time.

As Ramón pointed out, you can ask Wolfram Alpha to do a side-by-side comparison of the two men, and it will give you this very nice side-by-side images, jobs, and timeline: 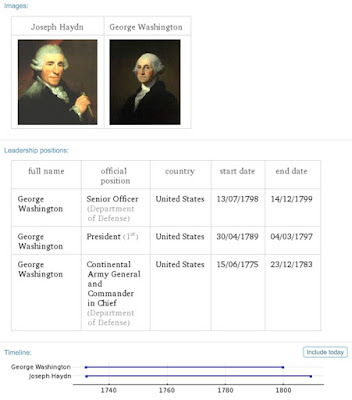 But did Washington ever hear Haydn?

I did a query for:

and that took me to an announcement of a concert in Philadelphia of "Music Washington Would Have Heard," which told me about the American composer, Alexander Reinagle, who was a huge admirer of Haydn. Washington in turn, was an admirer of Reinagle.

The Wikipedia entry on Reinagle points out that:

"In 1786, Reinagle decided to try his fortune as a professional musician in the new United States of America. He moved ... to Philadelphia, which was the national capital at the time. He helped revitalize the musical life of Philadelphia in the 1790s, introducing that city to the music of Haydn and Mozart, as well as his own original compositions.

One of Reinagle's admirers was American President George Washington. In 1789, Reinagle composed a “Chorus”, which was performed for Washington at Trenton, New Jersey, during Washington's journey to his inauguration. Later, in Philadelphia, Nellie Custis, Washington’s step-granddaughter, was one of Reinagle’s music students. Washington was a frequent concertgoer, and could often be seen in the audience at Reinagle’s concerts."

So while we don't have certain proof, the likelyhood is VERY high that Washington heard Haydn at one of Reinagle's performances.


So how did we do on the Pre-Challenge?

Sun distance? The answer varied from 6 billion miles to 1000 miles. But we did better on this than on any other question, with about 50% of people getting it correct (in miles or km).

2GB over a 10Mbps line? Only about 10% got this one right, with a lot of people making the "off-by-8X" error (bit vs. byte). Be careful with those definitions!

Which colony gained independence first? The answers were all over the map. (Basically, everyone was guessing.) Not a real surprise. I had to guess as well.

Washington ever heard Haydn? About 25% of us said "no," which we now know is incorrect. It's clear they overlapped, AND there was an active channel of communication in the person of Washington's step-granddaughter!

Extra credit: How many degrees / day? This was, unfortunately, a poorly worded question in the Pre-Challenge (my mistake!). On the other hand, the blog post has the nice diagram that makes the meaning clear, but it was obvious that lots of readers had a different interpretation than I had. That's fine, but it makes evaluating the question difficult!

The big point of this week's Challenge is that research is often based on finding relationships between things. And that often depends on being able to look at some data and understand what's going on. If you have to stop and look up every last thing, you become inefficient, and will probably miss deeper connections that people with background knowledge will be able to see.

Knowing that Haydn and Washington are contemporaries lets you start to understand more of what life was like back then. Had Haydn heard of Washington? (Probably.) Had Washington heard of Haydn? (Almost definitely.) This is what deep understanding of a field is built from.

We've learned that sometimes you need to learn the specific language of a field in order to ask reasonable questions.

This is true particularly as part of being a literate citizen.

Quick question here: What should you know to be a literate and informed citizen? The size of your country's GDP? (And what a GDP actually is?) What fraction of that is spent on education vs. military defense?

Yes, I know you can look all of these things up... but people don't when they're in mid-discussion--be that a debate about economic policy for the country, or about what people were contemporaries in history. Being able to know what the basic facts are--and being able to reason with those basic facts, gives you a huge amount of leverage. You can reason (and fact-check) accurately.

In summary: Keep learning, it's the only way to be better at understanding your world!

(And keep searching as well...)