Dan Russell • July 15, 2020
SearchReSearch
Republished with permission from SearchReSearch
Answer: Gomphotheres.. in Panama? Dan Russell
As I said, I was thinking about gomphotheres...
... as one does, and realized that they were native to North America, but also show up in South America. Likewise, other animals (such as opossums, armadillos, etc.) were native to one continent, but then show up much later on the other American continent.
This then prompted my curious question: How do you get big land animals starting out in one place but then later appearing in another place that's apparently not connected?
And, just as importantly, how would I find information about this? Is there a name for such a thing? My wandering mind led to the following Search Research Challenges:
1. The emergence of the Panama Isthmus must have been a big deal biologically. If I was to do a search for this, what would be the best term for this? There MUST be a specialty term that I could use to search for more information. What would that term (or phrase) be?
When I was thinking about this Challenge, I did a bunch of searches like:
[animals emerging after
Panama Isthmus]
... and that didn't work immediately. I cast around for awhile before finding this query:
[ animal migration North and South
America after Panama emerged ]
THAT worked, and taught me about the Great American Interchange (GABI), which is the late Cenozoic event in which land and freshwater animals migrated from North America across the Isthmus of Panama as it arose from the sea floor, bridging formerly separated continents.
So I was impressed to see Elizabeth's straighforward query:
[ panama animals moving between
north south america ]
A key to the construction of this query is to focus on the terms animal, and include both North and South America. As she points out, lots of words that you THINK might help (e.g., paleontology) don't actually do much to get to the point.
My general heuristic is to:

...use the simplest possible words to describe the topic of interest...

Even more interestingly, after learning about GABI, I went back to my earlier query (the first one above) and I discovered that GABI is mentioned in those results, it's just not surfaced in the snippet. If I'd spent a bit more time digging into what I'd found, I'm sure I would have gotten to GABI.
And with the closure of the gap (the Darién Gap, as Ramón pointed out) between North and South America, animals could easily flow from North to South America, and vice-versa.
As we found, Ramón pointed us to a great 2016 article Timeline on the Formation of the Isthmus of Panama, which points out that the gap between North and South America closed around 3M years ago, leading to a swarm of dramatic climate changes, oceanographic, and biological changed. The currents through flowed through the gap suddenly caused the Caribbean to change in nature. Fish that were the same on both sides of the isthmus suddenly became separated into different gene pools. This natural experiment lets us study how quickly animals can evolve, and how well animals can disperse across a newly open land gap.
This migration included the immigration into South America of North American ungulates (including camelids, tapirs, deer and horses), proboscids (gomphotheres!), cougars, saber-toothed cats), dogs of various types, weasels, raccoons, bears, and a number of rodents.
The larger members of the reverse migration, besides ground sloths and terror birds, were glyptodonts (armadillos), pampatheres (even bigger armadillos), capybaras, and the notoungulate Mixotoxodon (think "small hippo"). I imagine that the isthmus was fairly busy over the next couple of million years as some animals went south while others moved north.
In general, the initial net migration was symmetrical. Later on, however, the Neotropic (southern) species proved far less successful than the Nearctic (northern). Moving south turned out to be simpler for the immigrating animals that those moving north. Not everything is symmetrical in the world.
Then, in an accident of reading, I found out about the screw fly problem in raising livestock in North America... and the connection to the Darién Gap, and Panama in general.
So...
2. Once you've figured out the answer to the first Challenge, can you figure out the connection between the answer to Challenge #1 and the eradication of screw worms in the US?
My search was for:
[ screwworm eradication Panama ]
And quickly found an extract from a web page on this topic (see below). That inset block about screw worms (Cochliomyia hominivorax) is called a featured snippet, and shows a highlight from an article in the Atlantic on screw worms, and the surprising US program that keeps screw worms out of the US, Canada, and most of Mexico. (Farther down on that SERP are several other articles, including a recent one from National Geographic.) 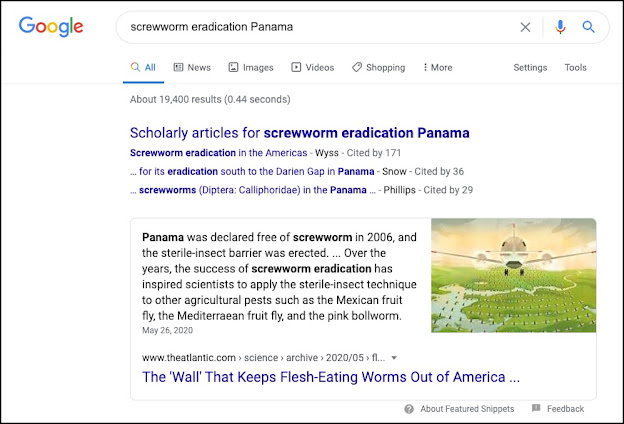 As these article tell us, in a hugely successful agricultural science program, screwflies (and the losses caused by their larvae) have been functionally extinct in the US since the late 1960s and in all of North America since 2006.
As a skilled SearchResearcher, this kind of featured snippet is nice--it gives lots of context around the piece of information you're searching for.... BUT... always click through to the target page and read the whole thing--you always want to verify and validate the whole thing. (Of course you'd do that, and read another page or two to triangulate, right?)
The program involves creating millions of sterile screwflies, and then dropping them into a region to basically cause the live birth rate to drop to zero. You never get them all, but after a while, the rate is low enough that they have a difficult time reproducing.
Why are there still screw worms in South America? As the Atlantic article points out: "...But for any country to go it alone makes little sense, given the porousness of national borders. And getting the entire South American continent on board is so colossal a financial and diplomatic undertaking that it hardly seems possible..." even though it clearly works.
But the US and Mexico can fund the eradication work at the natural bottleneck found in Panama at the Darién Gap.
In essence, the sterile screwfly program re-creates the gap between continents so that the screwflies can't travel northward. What geology changed, a bit of animal husbandry can restore.

There are several here:
1. When searching for a complex topic that might have a specialized term, search for THAT term (or phrase)--once you know it, subsequent searching success is much higher. To a certain extent, knowing what might have a distinctive name is a bit of an art. As you read more widely, you'll get better at guessing what would be a named (and therefore searchable) event. The Great American Biotic Interchange (GABI) is a great example of a specialized name that I figured had to be out there. Test your own understanding of this: What other kinds of events would be named? What about the separation of Africa from the Americas? Is that a named event? How about the formation of the Mediterranean? Is there a named event associated with that?
2. When searching for a name, use the simplest possible words to describe the topic of interest. We've talked about this before, but it's even more important when searching for a name (or phrase) of something you're not sure even exists! Think of it like this: you're trying to find the Wikipedia page for your complex topic.
3. Click through to the web page on a featured snippet to make sure you understand it. Like other snippets, it's a shortcut for seeing what kinds of content is on the page you seek.
Hope you enjoyed this Challenge!
Search on!