Dan Russell • January 23, 2019
SearchReSearch
Republished with permission from SearchReSearch
Answer: Gipsy Kings questions–What language and what’s that musical practice? Dan Russell
I admit it: Music completely absorbs me...
... taking up most of my cognitive capacity. That's why I can't listen to music as I work--my brain can't NOT pay close attention.
When I went to see the Gipsy Kings in a concert I was enchanted and fully engaged--although that didn't stop me from taking note of a few items that sparked my curiosity. As I assume you do, I always have a piece of paper and a pen to jot down these questions that I don't want to answer then and there, but things to look-up when I get home.

If you look at my notes, you'll see them full of funny markings--the "look up" code (L/U) appears like this:

At least that's what I wrote down during the concert. It's a great way to remember all of those things you'd like to learn, but can't seem to remember when you get home.

Remember that the lyrics of that song include the very mysterious passage:

I understand enough Spanish to know that this ain't Spanish. So...
1. What language IS this lyric (Wil Majiwi...)?

I thought that this might be tricky, so I started with a simple query:

That is, I double-quoted it so Google wouldn't try to spell-correct it or give any synonyms. This trick is an important one to use when searching for unusual spellings or words in languages you don't know.

But while this query gave me lots of lyrics (e.g., the full lyrics of the song), I didn't learn much about the language per se. I was hoping to find a commentary about the song that might say what the language was, or perhaps find that it was a place name. Neither tactic worked. Although I did find that some sources show the lyrics as:

while some have last word as "wilnana."

My next attempt was:

This gave me a bunch of results, many of which I opened as separate tabs ("lateral browsing"), opening 4 or 5 results at a time to quickly scan between them.

I found one clue that "Majiwi" refers to an Australian Aboriginal tribe (as noted in the book An Ethnography of Stress: The Social Determinants of Health in Aboriginal Australia but that's probably not what I was seeking.

On the other hand, I DID discover that a musician by the name of Titi Robin played both the bouzouk and the oud on the track. The bouzouk (also spelled buzuq) and the oud are common in Middle Eastern / Turkish music. They're added to the mix to give the tune that particular kind of sound. This might be a hint. (As Regular Reader Luís Miguel Viterbo points out,".. it might be a Maghreb dialect of Arabic." Perhaps.)

While I got a lot of results, none of them really answered my question. What to do next?

However, like Remmij, I also noticed the "People also ask" box as I was doing my searching: 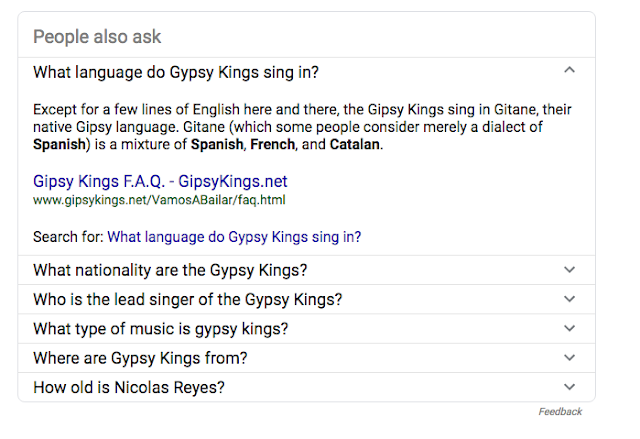 Clicking on the FAQ link takes you to the GipsyKings.net site where they say the Kings sing in Gitane, a combination of Spanish, French, and Catalan.

That would seem to answer the question.

But Luís Miguel's comment made me think that maybe there's something else going on here.

JUST TO CHECK... I did a site: search on the GipsyKings.net site to look for other mentions of language:

that gave me 27 hits--not too many. I started checking them out and found this intriguing comment in one of the forums: "And all bets are off when they're singing in what I assume to be Caló..."

What's Caló? A quick check on Wikipedia tells me that it's is a language spoken by the Spanish and Portuguese Romani. It is a mixed language based on Romance grammar, often used as an argot, a secret language for discreet communication amongst Iberian Romani.

Again, from the GipsyKings.net site--a link to a Vancouver Sun newspaper article that tells us "The Kings speak and sing in the French Provencal and northern Spanish Catalan dialects in addition to the gypsies' own Romany language..."

So... we don't have definitive proof, but it's clearly NOT Spanish or Portugese, but is most likely to be Gitane, Caló, or Romany...or some blend of all three. In any case, the words spoken / sung / written in the lyrics are something not in common parlance. There are still some mysteries in the world.

2. As I was sitting in the concert, I was struck by the number of times they would sing in long, beautiful, intricate phrases, spending quite a while varying a single note up and down. It occurred to me that this musical technique MUST have a name. I'd like to know more about this practice, but to search for it, I need to know what to search for--so... what's this called?
I liked Remmij's search--the query:

My query was a variation on this search:

[ singing many pitches on a single syllable ]

which gets you to the idea of melisma.

Three big lessons from this week:

1. Not everything has a simple answer! It turns out that my simple note to myself ("what language is...") isn't easily answerable. At least not yet! At some point, some journalist might well ask this question, and we'll get the answer from the source. But at the moment... it's still a mystery.

2. Take notes and remember to look things up later. I didn't want to look up the language while attending the concert. (I wouldn't be that rude!) But I did want to remember to check. While it's a simple thing, looking up things that you've noticed throughout the day (or the concert) enriches your understanding of the world. Take notes! (And remember to check your notes when you get home.)

3. A simple description of the thing you seek often works really well. In searching for that singing style, the fastest search is a short description that contains all of the key features (in this case, multiple pitches on a single syllable).


As always, search on!

The Joy of Finding Out All of the copyedits got turned in on Monday of this week--exactly on schedule. I get one more iteration on copyediting, then on to the full resolution galleys! Forward progress was made!