Answer: Fountains with something other than water?

Dan Russell • October 19, 2015
SearchReSearch
Republished with permission from SearchReSearch
Answer: Fountains with something other than water? Dan Russell
Non-watery fountains?


This week's Challenge was fairly simple, but could be as open-ended as you want. It came about when I saw some non-water-based fountains, and was struck by how crazy they could be. In particular, I found one fountain that deeply surprised me--it was this first one...

1. Can you find a (man-made) fountain that uses a toxic metal as its "water"? How made it? Where is it? And why on earth would someone make such a crazy thing? (I was rather surprised when I found this one; I suspect you will be as well.)

This Challenge wasn't all that hard the query:

quickly leads one to several articles about Alexander Calder's 1937 fountain made of mercury. You can quickly learn that this fountain, made of flowing liquid mercury, was commissioned by the Spanish Republican government for the 1937 World Exhibition in Paris. The artwork is a memorial to the siege of Almadén (which then supplied most of the world's mercury) by General Franco's troops. The mercury fountain, now at the Fundació Joan Miró in Barcelona, is now displayed behind glass for safety reasons. Here's a short video of the fountain in operation:

At least one person noticed that I used to work at the IBM Almaden Research Center in San José, California. The lab is named Almaden after the region where it's located, New Almaden, CA, which was in turn named after Almadén, Spain. New Almaden was well-known for its large mercury mining operations, which supplied mercury for gold mining operations in Gold Rush-era California (late 1840's).

This was a bit more tricky, and I still haven't found the perfect strategy, but here's what I did.

I started with queries that did various pattern-matches:

but that wasn't so productive. There are too many low-quality hits.

Then I tried various versions of the AROUND operator, such as:

and that didn't work well either. Too many poetical uses of those terms near each other.

I realized that perhaps a better solution would be to try and use language that would be in an article that talked about non-water fountains.

So I went back to the mercury fountain article (from above) and looked at the text carefully. In that article I noticed that the writer pointed out that this fountain used "...mercury instead of water..." So I tried that next:

and an additional variation:

I used the "a * fountain" to find articles about fountains that were of a particular kind, then added in the expressions that would most likely be used in articles that specifically mentioned that it was different than a water fountain.

Here's one kind of sand fountain, where the sand is pumped up from below:

But also a kind of sand fountain I hadn't thought about before... an underwater fountain of sand cascading down inside of an aquarium:

Since this strategy was working well, I thought I'd try this same query in Google Books, hoping to find some really novel kinds of fountains that were well-described there.

For Books, I did the search:

I had to minus-out the phrase "fountain of youth" because I was getting too many off-topic hits.

Surprisingly, this strategy worked really quite well: I was able to find mentions of a "fountain of molten copper" in a concordance to the Qur'an, and fountains of blood, pitch, and bitumen described in an 18th century book, "The Universal Library, Or, A Compleat Summary of Science."

The first Challenge was pretty straight forward. It's good to have these every so often--I mean, who knew that someone would be crazy enough to make a mercury fountain??

But the deeper lesson in the second Challenge is this:

1. Sometimes you want to use characteristic language in your search. In this case, the phrases "rather than water" or "instead of water" are going to typically be found in such descriptions because the article is describing an exception to the ordinary. As always, the general idea is that you want to search for the language that will be in the web page you seek.

Remember this when you're stuck on a really hard search task!

And of course... remember there are natural fountains as well. In this case, a gusher of oil from Baku... 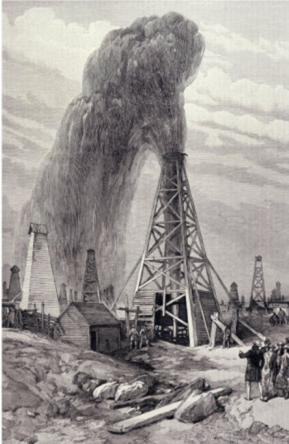 And at Pu`u` `O`o vent on Kilauea Volcano, Hawai'i. 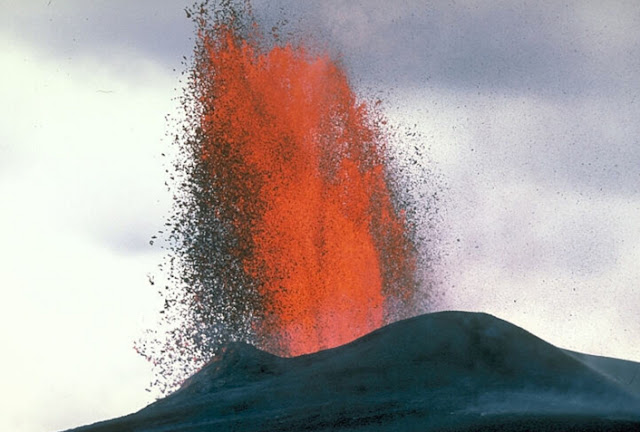