Dan Russell • June 12, 2017
SearchReSearch
Republished with permission from SearchReSearch
Answer: Finding shadows in ball parks? Dan Russell
There's simple.. and then there's simple...
The FIRST version of this week's SRS Challenge was a bit too simple. Finding shade at Yankee Stadium (along with several other stadiums) is pretty easy: lots of fans have written up guides to sun and shade. That's a handy thing to remember.

will find notes from all of the fans, documenting where to sit to be in the shade.
Too easy.
So let me rewrote the Challenge just a bit to make it more general...

1. My brother has changed his mind, and now he's going to see a baseball game at the Red Wings baseball stadium in Rochester, New York on June 11th. The game starts at 1PM. Where can I get a seat that will be both near the field and in the shade for the whole game? 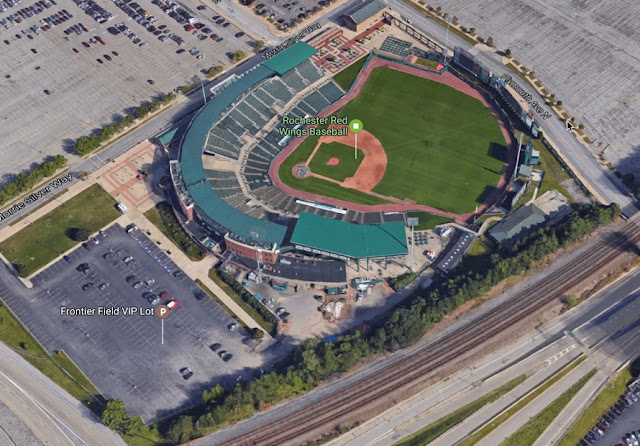 More to the point, I would like a method that lets me figure out the shadows for anyplace--be it Frontier Field in Rochester, or a lesser-known place like Kezar Stadium in San Francisco that doesn't have a stable fan base to write out such notes!

As we've discussed before, the ideal solution would be to find a tool that let's you figure out the sun and shade for any place. (And an even BETTER solution would let you create a 3D model of the stadium)

So my goal is to find such a tool. My first query was:

which led me to FindMyShadow.com -- a web tool designed exactly for such a thing!

So let's go back to Yankee Stadium and figure out where the shadows will be for the game. (You can do this same process for Frontier Field...)

When you go to the site, you can selection the location (see the lat / long box in the upper left), select the date (calendar). The sun position chart shows sunrise (the green arrow on the right, showing it rising in the east) and sunset (the red arrow on the left). Note that you can also set the Timezone (which for this time of year is EDT -- or UTC-5 (which is the same as "5 hours before GMT").

Once you've got these location and time set up, you can bring in an aerial image (of Yankee Stadium), and THEN you can draw in the relevant walls of the stadium. 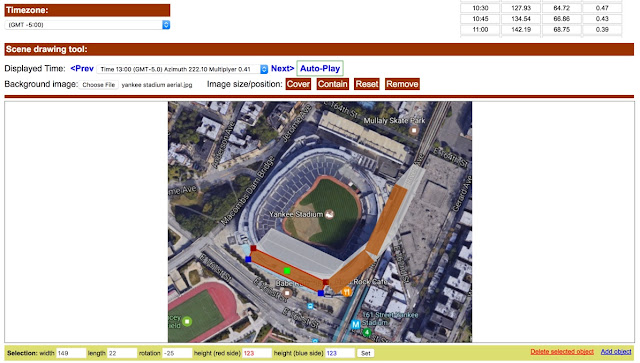 You click on "Background Image: (choose file)" to upload the image of the stadium.

Then you can move the brown boxes to approximate the edges of stadium. (Drag the corners to move them side-to-side, and click on the green center dot to rotate the rectangle.)

Note that I filled in the height parameter (bottom line of the interface--it's 123 feet high--I looked it up), so the gray shadows show the actual shadows at that time (1PM) in this stadium (the model of Yankee stadium).


Of course, if you want, you can grab a seating chart image, then rotate, scale it, and make it transparent to see which seats you might like to have. Here's a closeup of me doing that. I find where the shadow is, then pull up the translucency so I can find out what section and seats are there. 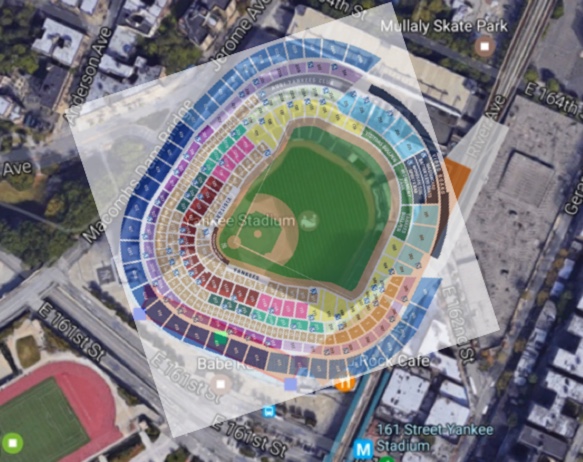 When you play around with this (as I did), you can see that most of the seats along the first base side of the field (lower left) are in the shade starting at 1PM. But advancing the clock to 3PM, you'll find that some of the seats near home plate start to get some sun!

In any event, now you know how to figure out the sun orientation (and shade patterns) for basically any place in the world. You can now go to that sports event confident that you'll be in the shade the entire time. (Or not, as you wish.)

In the process of playing around with FindMyShadow.com, I also ran across a really interesting article on the physics and factors involved--"Lost in the park: The physics of ballpark orientation," which is a fascinating read.

There really is only one giant take-away from this week's Challenge, but it's an important one:


1. ALWAYS look for a tool when you're trying to do tool-like searches. A good query is to search for the basics (e.g., [ sun shade .. ] and add in tool Yes, there are fan tables of sunshine and shade, but many of them are for specific days in the year and for a specific location. FindMyShadow.com is purpose-built for this kind of thing. It's almost certainly better than any table you're going to find. (Although it is a bit more complicated to use!)

That was fun. Up next--even more fun in searching out the unusual and obscure.