Answer: Finding out what hats, badges, and patterns mean…

... are all signifiers -- that is, they all connote much more than you'd think, with meaning and symbolism dripping all over.

Knowing the backstory is crucial for these kinds of things. As in my story about the appearance of the Regimental Band and Pipes from the Citadel their Confederate gray dress uniforms--the hats, the badges, the cloth--all carry a great deal of meaning. In the Citadel's plaid pattern, the official registry of tartan patterns says that it's "... A variation of the Earl of St. Andrew's ... with an alternate gold and red over check to suggest bravery and excellence..."

The search for this bit of information was straightforward:

... note that you need to know that tartan is the name of that particular cloth pattern. 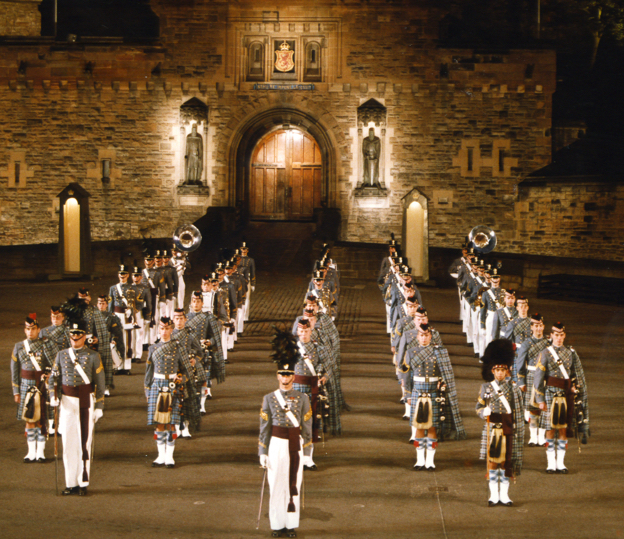 Once you know that items of clothing are signifiers, what else can you learn from them? Let's dive in.
1. Once upon a time, everyone wore hats. But in this famous movie, what kind of hat is being worn by the man on the far left? What's the name of that hat? And what kind of person would wear such a thing?

In this case, I know this scene is from the movie Casablanca, I even know that the actor is Claude Rains. (This is FMOK. But a simple search-by-image would have told you this much.) So my quick initial search was for:

but that proved to be too broad. Lots of great results, lots of great images, but it wasn't precise enough. So I changed it to:

and found some good results.. including ones that (when you click through to the landing page) tell you that this hat is called a kepi, a kind of circular hat with a flat brim, sometimes decorated with various kinds of insignia denoting rank. The word is a loanword from the French term, képi.

In the US, the kepi is most often associated with the American Civil War. Union Officers were generally issued kepis for fatigue use. A close copy of the contemporary French kepi, it had a sunken top and squared visor. It was often called a "McClellan cap," after the Union (northern) commander of the Army of the Potomac, G.B. McClellan. 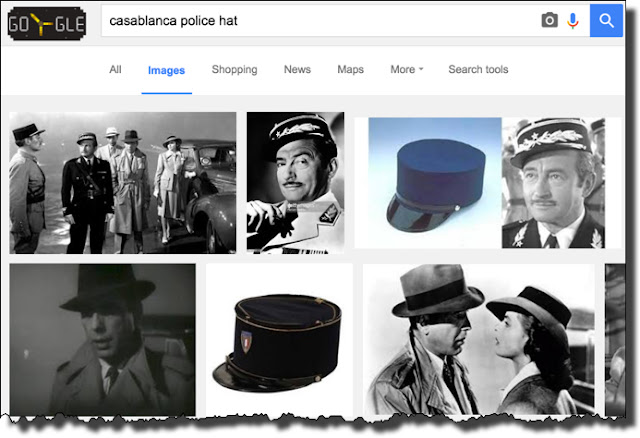 2. Hats vary a LOT from place to place. Can you figure out the name of this hat? Where would this hat wearer be from?

Well... drat. I thought I'd cropped the top photo enough that Search-By-Image wouldn't work. But the good news is that it does work. It takes you to the complete image and the web page, which tells us that the hats they're wearing are called "lemon squeezers" (so named after the indented shape, which looks a good deal like a traditional lemon juicer device):

Digging a bit deeper, one learns that this distinctive hat shape was worn by the New Zealand’s soldiers and was designed by William George Malone. Originally created for his Taranaki Rifles Regiment, the hat was designed to mirror the outline of Mount Taranaki (giving the men some needed connection with home)... and also to allow water to easily run off in the rain. The hat went on to be adopted first by Malone’s Wellington Regiment and later by the rest of the New Zealand Infantry Division in January, 1916.
3. What's the name for the kind of badge shown below? What kind of job does a person wearing these shoulder badges have? (Hint: Even though this is an archival photo, people with this job STILL wear these badges today.) 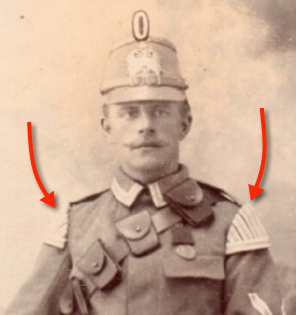 Once again, Seach-By-Image works for this (although, once again, I tried to alter enough so that it wouldn't!).... If you search-by-image, you land on a German Colonial Uniforms page, which has this image, and the explanation that his shoulder badges are "musician's swallows' nests," which is a common badge designating a musician in many European military bands. (As contrasted with epaulettes, which are a shoulder board worn as an insignia of rank on many military uniforms.)

A search for images with that search term:

shows all kinds of variations on that theme. 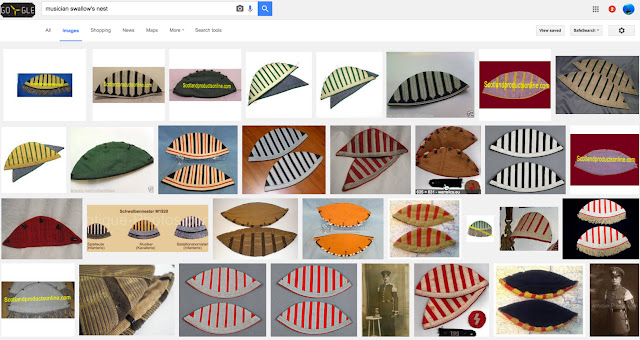 And, if you search for:

you'll find all kinds of Scottish pipe bands, many of them with uniforms that look like this (though I will note that these are musicians from trumpet section): 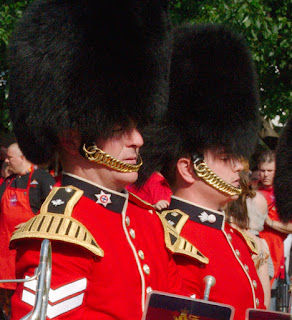 (If you're interested, the hats these guys are wearing are pretty specialized and meaningful as well. Can you figure out what they're made of? And.. for extra credit, what country are these musicians from?)

4. The pattern of plaid tells you a lot about the place where the wearer (or his military outfit) is from, and with it comes a whole lot of history. What region of the world is THIS kind of cloth from? 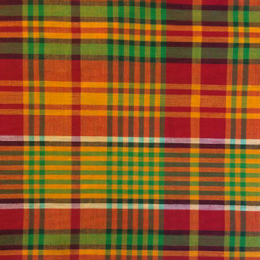 This is a little bit of a trick question. All along, I've been talking about Scottish tartans and plaids. But if you spend your time looking through books of plaid patterns, you'll be disappointed. This is a pretty tropical color scheme.

ONCE AGAIN... search-by-image is your friend. You'll quickly learn that these mango, red, and greens might look like a tropical tartan, but in fact it's madras cloth from Madras, India. Yes, it's a plaid pattern, but note that a tartan is a pattern consisting of criss-crossed horizontal and vertical bands in multiple colors. Tartan is often called plaid in North America, but in Scotland, a plaid is a tartan cloth slung over the shoulder as a kilt accessory, or a plain ordinary blanket such as one would have on a bed. In the military band context, A full plaid is a long piece of tartan fabric (about 12 yards), traditionally worn as part of a full Highland dress uniform. A full plaid is pleated the whole way, with half of its length sewn shut (so that the pleats cannot open). Its length is almost twice the height of the wearer. As a military garment the plaid served a practical purpose as a kind of blanket and overcoat in the 18th century. It also provided protection from the constant rains for the soldier's musket and powder.

Although I hadn't intended it this way, one of the big lessons for this week is:

1. Search-by-image works more often that you'd think. As you can see from the above examples, it even works when the image is cropped or edited!

2. As usual, knowing a couple of specific terms really helps focus your search. In this week's Challenge, the key word was tartan.