Dan Russell • January 18, 2017
SearchReSearch
Republished with permission from SearchReSearch
Answer: Finding immersive experiences Dan Russell
How do you get immersed,
if you can't find what you
want to be immersed in?
There are lots of "immersive" videos out there. Here's a nice example from David Hsieh:
( https://www.youtube.com/watch?v=2OzlksZBTiA )
And we know about the NYTimes VR stories.
But how do you search for these things?
The SearchResearch Challenges:

1. How DO you find immersive online experiences? (I've mentioned videos as one way to be immersed. Are there other ways to get that experience?)

Let's start by figuring out what an "immersive online experience" could be. If you start with the query:

you'll quickly learn that this can refer to:

a. 360 still images--pictures that let you move your viewpoint anywhere (up, down, left, right, zoom in-and-out). These often have extra buttons you can click to see inserted annotations, pieces of text, or videos. Examples: Discovery Channel's Deadliest Catch that lets you look around the wheelhouse of one of the boats in the series. Tatlarin Church Cave in Cappadocia, Turkey from the International VR Panorama collection. Of course, Google Photospheres are another kind of 360-still-image as well. A nice example that's embedded in a Map is this one from the high mountains in Nepal. (See below for more info about finding Photospheres.)

(Unfortunately, we also learn that these kinds of images are sometimes also called panoramas, or VR images. The terminology is a bit ambiguous.)

b. 360 videos--these are videos that let you move your viewpoint anywhere as the video plays. In essence, it's a stream of 360 still images that create the video. Examples: the diving example from Green Island (above), or this one from MythBusters (Discovery channel again): Sharks!

c. VR application--this is the full-on Virtual Reality experience, with 360-steerable video, usually of synthesized video scenes, with a way for you to direct your movement and/or interact with the objects or other people in the scene, as in Second Life (the VR world). You can play/live in Second Life now, or watch someone playing in a VR environment, but at the moment, these are all fairly specialized apps, so for the time being, they're not part of what we're going to look for. (Maybe we'll cover this topic in a year or so...)

But here's the thing: How do you find these 360-images or 360-videos? They seem to have a variety of names (panorama, 360-video, immersive video, VR video, etc). Some even require specialized applications to run on mobile devices (e.g., Google Expeditions, which are 360-videos that can be used in the classroom, and work for multiple people in the environment at the same time). To see where all this is going, here's interesting new immersive house tour app. (It's quite nice...)

And worse (from our perspective), there's no consistent filetype, URL, or pattern we can search for! (By contrast, if you wanted to find videos, you could search for filetype:MP4 or you can search on YouTube, Hulu, or similar. But what's the equivalent for 360-immersive videos?)

Sorry, but there doesn't seem to be any really great way to do this.

The best advice I can give you is to look at well-known collections of 360-videos.

you'll find a number of collections, including channels that are dedicated to just VR videos. (Of course you should do the same with the query [ 360 videos ] as well, just to get a more complete set of channels.) 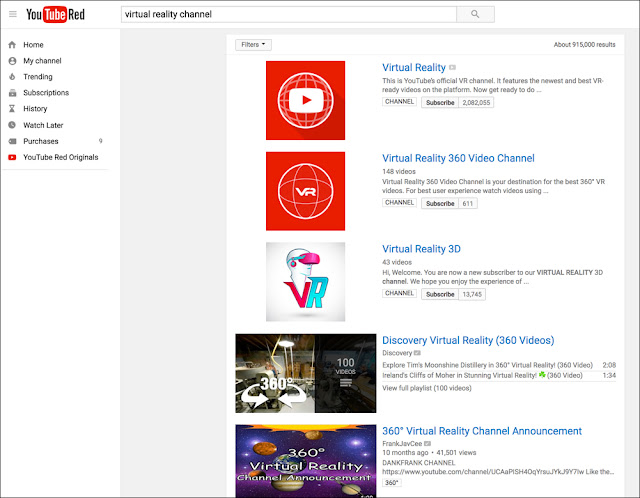 On the other hand, many news services now have their own YouTube channels that you can search. For instance, the BBC has their BBC YT News Channel (and in there you can search for [ 360 videos ] and find a long list of immersive videos).

To do this, click on the magnifying glass icon in the YouTube channel page, then you can do a search for something like [ 360 video Hadron collider ] to get the 360 immersive video tour of the Large Hadron Collider.

Likewise, the New York Times has its own immersive video channel, but in their channel you have to search for [ 360 VR ] to get the complete list of their videos. And, unfortunately, not all of the NYTimes VR experiences are on their YouTube channel. To find others, you have to visit their video site: https://www.nytimes.com/video At the moment, their search function seems broken, so you can't even use their search tool to find things. Since they don't always tag their 360 videos in a consistent way, I don't know how to find all of their 360 / VR / immersive videos!

The Discovery Channel has 360 videos, but in each case you have to add "360 video" to your queries.
So.. the state of the art at the moment seems to be this:

You have to know where to look, and then search within each of those sites. Sorry. (If something gets better in the future, I'll post an update. But at the moment, 360 / VR / immersive videos are inconsistently labeled and don't share a file format, so... Good luck.) 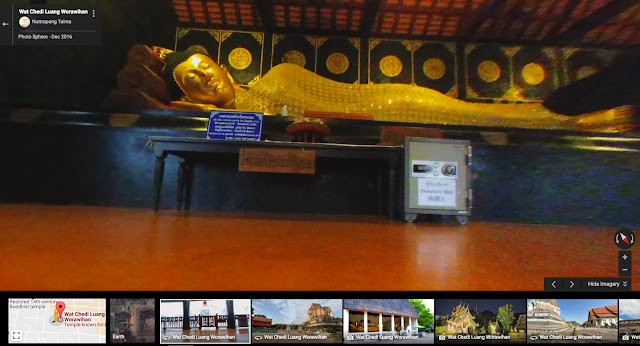 Remember that clicking on the yellow pegman in the lower right of the map will show you all of the StreetView locations (the blue lines) AND the Photosphere (the blue circles). 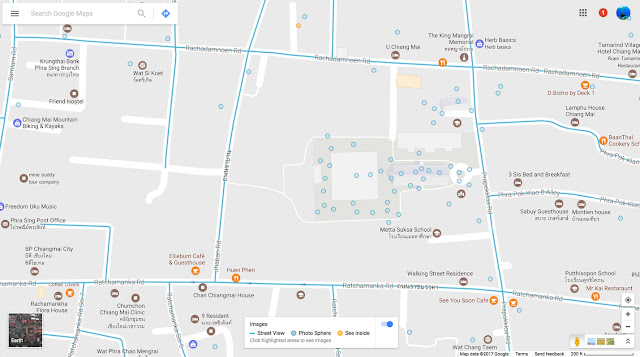 Now, if you just zoom out, turn on the Terrain view and look to the west, you'll find the closest peak just 5 miles away (Wat Phra That Doi). 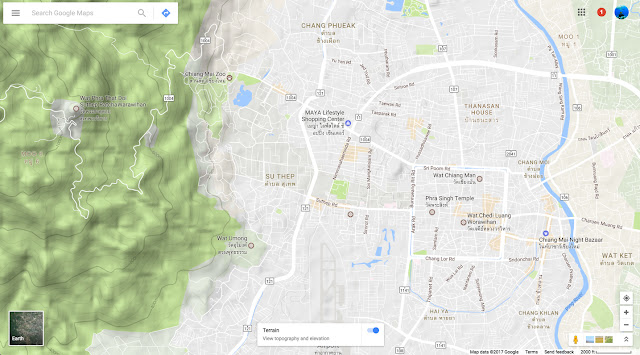 And once you click on the Pegman, you'll see the available Photospheres at the peak. 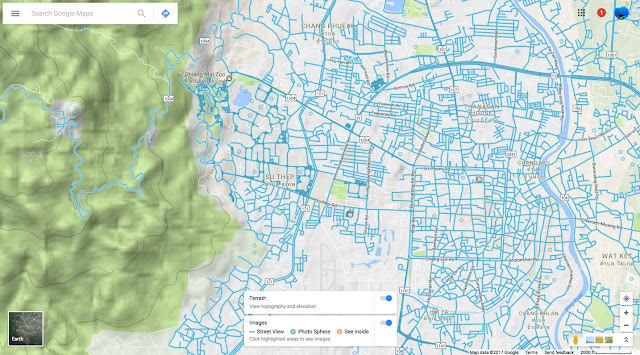 And if you click on the easternmost Photosphere, you can get a nice view to the east.
If you look carefully at this image, you can see the airport in the middle right. That's the same airport you can spot two images up in the map of the region with Terrain view turned on.

First off, I was late posting this Answer to the SearchResearch Challenge because I spent a LONG time trying to find a good way to search just for 360 videos. I thought there HAD to be a way to do it (other than the method I wrote about above), but no... there just doesn't seem to be any way to do it! As I said, there's no common file format (so we can't use filetype:), and there's no consistent naming, hashtags, or labeling, so I'm not sure there's any surefire way to do this. You just gotta know where things are.
I know, I know... that's so pre-Google, but I suspect it's true of many new content types as they're developed. Look for more of the same as more new kinds of video, VR, and Augmented Reality images/apps/experiences come online. They're going to be hard to find.
I'd love to be wrong about this, but I suspect that's the state of the art for the time being.
Search on... immersively!