... is one of those basic skills we have to develop as SearchResearchers. But it's also something that we encourage in our students, and in critical thinking in general. "Compare and contrast the American Civil War with the French Revolution. In what ways were they similar?" That's a typical assignment for school, but the ability to find interesting and useful connections is an important ability.

What are the connections as highlighted below.

Note that for all of these images, you can use Google Search-by-Image to identify the people, places, and logos.


1. What's the connection between these two people?

This is Amerigo Vespucci's statue in the Uffizi Gallery, by Gaetano Grazzini (Florence, Italy). 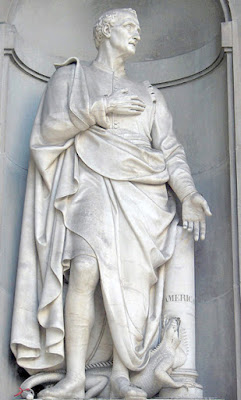 And this is Simonetta Vespucci. 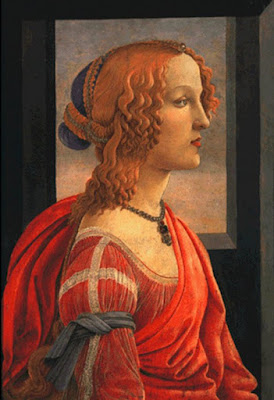 My favorite trick for finding connections is just to do a search with both of the names in the query. In this case,

I usually then open several tabs from the SERP to quickly get several perspectives on what's in common between them.

It didn't take long to find that at age fifteen or sixteen she married Marco Vespucci, son of Piero, who was a distant cousin of the explorer and cartographer Amerigo Vespucci. (Amerigo was the Italian explorer, financier, navigator and cartographer who first showed that Brazil and the islands of the Caribbean were not Asia's eastern outskirts, but instead was an entirely separate, previously unknown landmass. Colloquially referred to as the New World, this second, newly discovered continent came to be termed "America," deriving its name from Americus, the Latin version of Vespucci's first name.)

Simonetta was an incandescent beauty, the "it" girl of Renaissance Florence until her untimely death at age 34.

She was also, apparently, the muse of the famous Florentine painter Sandro Botticelli, who painted both the picture above, and this portrait below.

Widely considered the most beautiful woman of Florence, it's also thought that Simonetta was the model for the picture of The Birth of Venus, which you've seen before.

Pro tip: Keep this picture (and Botticelli) in mind as we keep searching for connections. It will come up again...

2. What's the connection between this company and this house?

It's a quick search to find that this is the logo of Mitsubishi. The Mitsubishi Group (三菱グループ, Mitsubishi Gurūpu) is a closely-linked set of autonomous Japanese-headed, multinational companies in a wide variety of industries.

Just another reverse-image search to find that this is the house of Thomas Blake Glover. 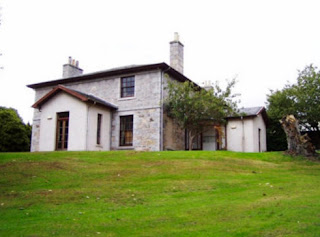 Now, what's the connection? Using the same method as before:

This leads to some remarkable information: In reading about the life of Thomas Blake Glover, we learn that Glover was a key figure in the industrialization of Japan. For this SearchResearch Challenge, he was instrumental in helping found the shipbuilding company which later became Mitsubishi. In particular, Mitsubishi's web site points out that Glover, invested in developing the Takashima coal mine on an island near Nagasaki in 1868. Their mine was the first in Japan to employ Western methods of mining. Even so, Glover later had to sell his stake, but he stayed on as manager of the mine for several more years. Mitsubishi acquired the mine in 1881 in the organization's first main diversification beyond shipping.

Japan lacked modern facilities for repairing ships. So, Glover imported the necessary equipment for a slip dock in Nagasaki in 1868. He later sold his share to the government, which leased the dock to Mitsubishi as part of the shipyard in 1884.

But there's more! He helped to negotiate the sale of the Spring Valley Brewery in Yokohama, thereby setting up the Japan Brewery Company, which later became the major Kirin Brewery Company, Ltd. (An urban myth has it that the mustache of the mythical creature featured on Kirin beer labels is in fact a tribute to Glover, who wore a similar mustache).

The house shown above is in Aberdeen, Scotland, and is the place where he lived for a while before moving to Japan. Born in Fraseburgh, Scotland, his birthplace was hit by a bomb in World War II and destroyed. This little Victorian cottage on the banks of the Don river was purchased by Mitsubishi in the 1990s and set up as a museum. (Apparently, it isn't doing so well, as a news report from July, 2015, tells us that it's boarded up, even though it's being touted as a tourist attraction in Japan.)

By contrast, his house and garden in Nagasaki, Japan, attracts millions of visitors each year. 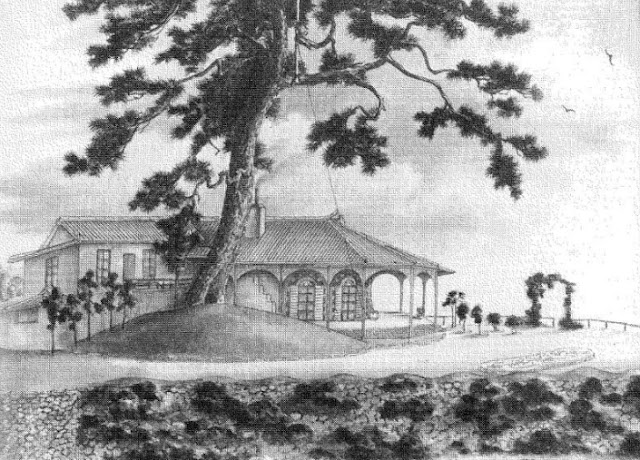 This is an 1863 drawing of Glover House in Nagasaki (グラバー園 Gurabāen), the oldest western-style building in Japan. Known in Japanese as Ipponmatsu (Single Pine Tree), the tree was chopped down in the early 20th century.


Connection: The house shown was lived-in by Thomas Blake Glover, who went to Japan back when that was a rare thing, and helped to startup Mitsubishi.

3. What's the connection between these two people?

Reverse image search tells us that this is Gustav Holst, the famous British composer (1874-1934). Best-known for his classical pieces, notably his orchestral masterpiece The Planets. 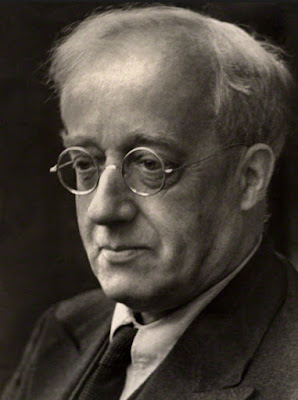 While this is a portrait of Elizabeth Siddal in the character of Beatrice, as painted by Dante Gabriel Rossetti, English poet, illustrator, co-founder of the Pre-Raphaelite school of painting. (Incidentally, Elizabeth later became Rossetti's wife, but more on that in a bit.) 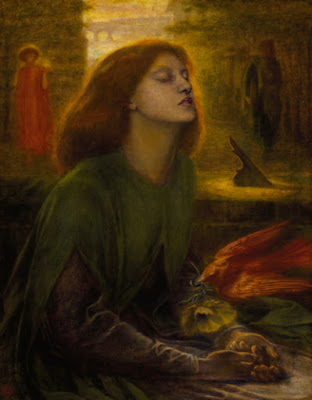 Once again, I did the conjoined search for:

Interestingly enough, about halfway down the page of the SERP, I see both Holst and Siddal's name in the same snippet.

Normally, I wouldn't think of Pintrest as a reliable source, but a clue is a clue, you take them where you can find them--and in this case, it leads on to discovery.

You don't suppose there's a connection between Christina Rossetti and the composer of "In the Bleak Midwinter" do you?

Searching for the connection:

we find that "In the Bleak Midwinter..." is a Christmas carol based on a poem by Christina Rossetti, the sister of Dante Rossetti, written before 1872. It was published posthumously in Rossetti's Poetic Works in 1904. The poem became a Christmas carol shortly after it appeared in The English Hymnal with a setting by Gustav Holst in 1906.


Incidentally, Elizabeth Siddel was Rossetti's muse, and towards the end of her life, his wife. Their relationship was always rocky, with on-again-off-again engagement for years. They finally married in 1860. The couple had a stillborn daughter and she became addicted to Laudanum (an an alcoholic solution containing morphine, prepared from opium and used as a narcotic painkiller).

She died just two years later in 1862 due to an overdose of Laudanum. Possibly a suicide, but we'll never know for sure. (The suicide note was supposedly burned by Rossetti...)

In his grief, Gabriel Rossetti buried the only manuscript of his poems with her. The poems, nestled in her coffin next her famous copper hair, haunted him. Seven years later, he had her coffin exhumed in order to retrieve the poems for publication. Although he got the poems back and published them as The Book of Life.

The story began to spread that when she was exhumed, Lizzie was still in beautiful, pristine condition and that her flaming red hair had continued to grow after death, completely filling the coffin. A bit macabre, but fascinating (and most likely untrue) story.

Connection: Elizabeth Siddel (in the picture) was the sister-in-law of Christina Rossetti, whose poem, In the Bleak Midwinter, was set to music by none other than Gustav Holst.


Extra Connection: As I was reading through the web pages on Elizabeth Siddel and Dante Gabriel Rossetti, I happened across a fascinating connection between the art of Botticelli and the Pre-Raphaelite school.

The picture of Elizabeth Siddel (above) is clearly in the PreRaphaelite style. But as I read through the page at the Musée d'Orsay website, I happened to notice the following in a commentary about Pre-Raphaelite movement:

Gradually, the medieval theme [that they had been using] was abandoned; Ruskin [a famous critic of the time] was concerned to see this obsession with the Middle Ages distancing artists from nature.

Henceforth, Burne-Jones [another PreRapahelite] and Rosetti turned to Italian art, and to Botticelli in particular. Finally, Jane Burden (1839-1914) and Elizabeth Siddal (1829-1862) – who married Morris and Rossetti respectively - became the true muses of the movement and brought a more sensual dimension to it.

It's not completely improbable when you look at the pictures side-by-side.

But that wasn't a connection I expected to find.

1. When searching for connections, try a search with both connection targets in the query. This seems obvious, and yet the surprise is that it works so often (and so well)!

2. Read "around" the target of your search. That is, you often will want to open up several different web pages to understand what possible connections might exist between your two targets. Be open to the possibility that there might not be any connection. Having several pages open side-by-side is a really useful strategy.

3. Connection clues sometimes show up in the oddest places. We found the connection between Holst and Siddal by looking at a Pintrest entry that linked Dante Rossetti with his sister's poem. Once we tested that connection, we found the obvious link between sisters-in-law.

As I said, finding connections is something that's important for our students to learn. One important skill to get across is that while it's easy to find connections, it's a bit harder to find meaningful connections. That is, spurious connections are simple--but ones that make a difference are a bit tougher. That's why "reading around" is important. Your students should get their connection information from more than one source.

Also, impress upon them the importance of "reading around" in order to be prepared. "Chance favors the prepared mind," said Louis Pasteur. One way to be prepared is to understand much of the context in the topic of interest. (That's how I happen to notice the unexpected connection between Sandro Botticelli and Dante Gabriel Rossetti...)