Answer: Fake or real? How would you know?

Dan Russell • November 2, 2015
SearchReSearch
Republished with permission from SearchReSearch
Answer: Fake or real? How would you know? Dan Russell
Turns out, it's tricky...
Well, at least the first couple of images were fairly easy to figure out. Let's look at these and then talk about the last pair of cake images.
The first image appeared in my Facebook stream by a friend who wondered how on earth the California Department of Transportation was going to be able to repair this landslide across I-5 (near LA).
So we asked the question:
1. Is this image really from the recent (October 16, 2015) mudslides on the Grapevine (I-5) near Los Angeles? 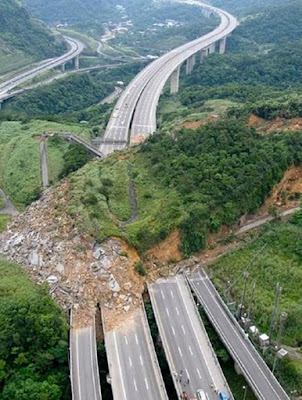 The obvious way to approach this is to Search-By-Image (SBI). You could save the picture to your desktop and then search for this by dragging in into the Search Images bar, or by loading it. (See my 1MM video about how to do Search-By-Image.)

A pro-tip is that you can right click on the image (control-click on a Mac) and click on the "Search Google for this Image" option. 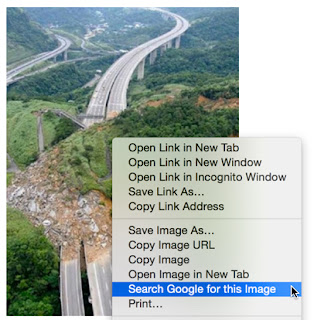 You'll quickly learn that this isn't from California at all, but from Taiwan. I double and triple checked this until I found the earliest publication from April, 2010. There really WAS flooding and large mudslides in SoCal earlier this year, but this isn't a picture from that event. (See LINK to look at those. You'll immediately see that the terrain isn't even close to similar, which is what made me wonder about it in the first place.


2. How about this next photo? Is this real? 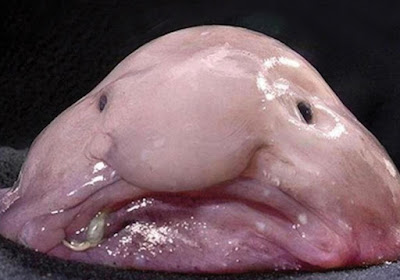 Doing the same thing (search by image) with this picture gives us a SERP with many results. 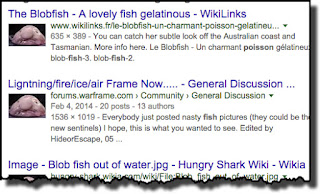 But with something this weird, you want to run down the bona fides on the "blob fish." I did that and found a nice Blobfish Wikipedia article which gave me the Latin binomial name (Psychrolutes marcidus) and links to articles about it in ichthyological journals and websites (e.g., Fishbase.se). As strange as it appears, we learn that blob fish live between 600 and 1,200 m (2,000 and 3,900 ft) They are weakly muscles, and primarily a gelatinous mass with a density slightly less than water allowing it to float above (or lie upon) the sea floor without expending energy on swimming. They primarily swallow edible matter that floats in front of it such as deep-ocean crustaceans and other deep-water detritus.


3. And what about this one? It looks so simple, but which of these two pictures of a piece of cake is the original? (The top cake pic, or the bottom cake pic?)

Now THIS is a more interesting and complex case. First let me tell you that NEITHER of these is the original image. This is the original photo I took in the cafe at the Munch Museum in Oslo.
If you look carefully, you can see I edited out some (but not all) of the crumbs sitting in the middle. So the answer is this: NEITHER of the cake images was original!
The question for SRS readers is this: How could you tell?
Generally, this kind of photo analysis is called forensic photography, or sometimes photogrammetry. In all cases, it's about looking at the image very carefully to determine what's going on in the image.
In this case, there are a couple of things to note. As Lap Fun Lee pointed out, when you zoom way in on the fork in the photo, you can see something odd--there's a bit of a white border around it. But notice the cake too--there's ALSO a bit of a white border there. 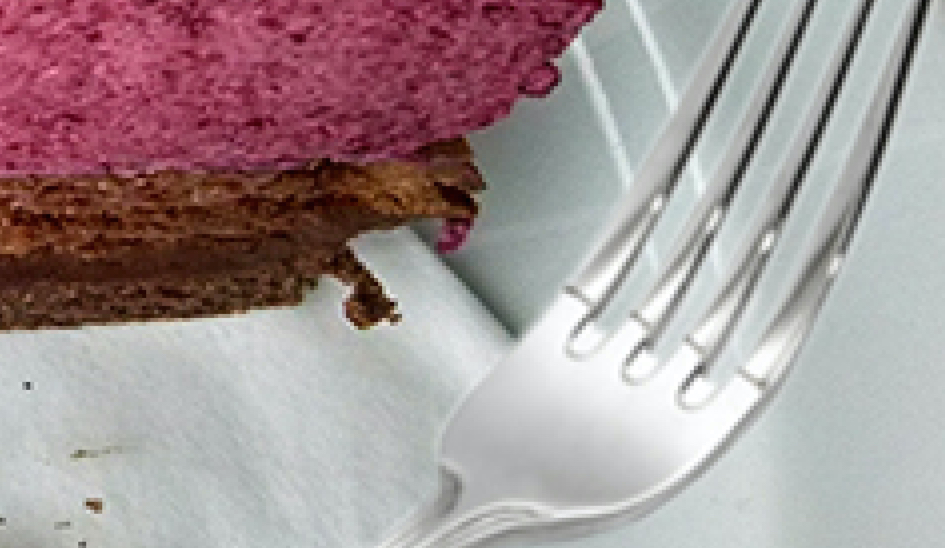 However, notice the BOTTOM border of the case--that border is dark colored, while the fork is light all the way around. That's often the hallmark of a transparent background image--the kind you drop into an image to make a composite. That's suspicious, but even more tellingly, the fork casts no shadow. See the shadow behind the cake? That grayness is everwhere on the right side of the cake, while there's no darkness anywhere below the fork.
These two observations make me think that the fork was just Photoshopped into the image.
As Tim Grove mentioned in the comments, you can do a search for:
[ image photoshopped ]
and find a tool for just that purpose. In this case, we both used ImageEdited.com to find that the image HAD been edited with Adobe Photoshop CC 2015, on a Macintosh. Here's what ImageEdited.com says about the cake-with-fork image.

If I do the same analysis with the non-fork cake, it ALSO tells me it was Photoshopped, and also gives the location right by the Munch Museum. (FWIW, I was actually just inside the door, just a couple of meters from the location noted here (59.917431, 10.775039). 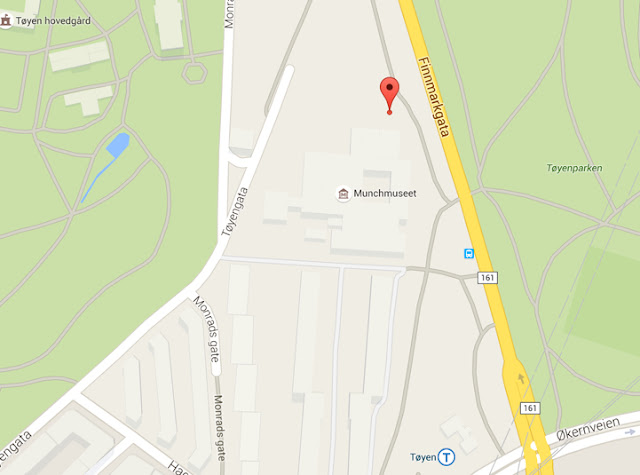 Note that the picture of the cake+fork has no lat/long, while the cake without the fork does!
Does that mean the cake-without-fork is the original? Not so fast.
Take a look at the two cake photos (with fork and without fork) side-by-side. Look closely (click on the image to expand to full size).

If you look carefully, you can see that all of the crumbs in the left image (cake with fork) have been replaced by a slightly-too-white coverup in the image on the right. In fact, if you make an animated GIF of the two images, this is somewhat easier to see... you can spot all of the pixels that have been manipulated:

And with this GIF, you can also see how strange the fork looks. No shadows--it's not really a part of the original image. This works on the same principle as a Blink Comparator, letting you switch back and forth between a pair of images and pick up any changes between them.
Since we had luck with the ImageEdited tool, I ALSO looked for other tools that would tell me if an image had been edited.
[ image edited analysis tool ]
I, like many of you, also found the ELA comparison tools (e.g., the one at FotoForensics.com) But this is what I saw when I dropped the images into the tool. Here's the cake-without-fork image. I was hoping it would show up the modified areas of the picture would show up under ELA analysis, but it didn't seem to pick up on the change especially well. There's a LOT more to write about photo analysis and photogrammetry, but I hope this little example has whetted your appetite.

1. As I've said before, verify/validate/triple check. This is especially true of extraordinary things. When they're extraordinary, they require extraordinary proof.
2. Just because I asked you which of the cake images was original does NOT imply that either IS original. Be careful, especially around images, that you're not misled by the context in which the image is presented. If you look carefully, you'll see that the images are near duplicates. But the crumbs in the fork picture are original, while they're missing in the forkless picture... along with the fork.
3. Don't get distracted by big changes elsewhere in the image. Yes, the fork changed... but so did a few details about the crumbs That's how we discovered that neither image was original, but were both modifications of a third image.
4. Search for analysis tools to help out. In this case we found ImageEdited.com and FotoForensics.com -- but in THIS case, the ELA method didn't prove to be very useful--but it's good to know that it's there. In the next case, it well could be useful.
Comment: This Challenge prompted more great discussion than almost any other Challenge in the past couple of years. Since you seemed to like this, I'll add more in this same vein in the weeks to come. We'll dive a bit more into photo analysis (and other kinds of analyzing information) to find if it's fake or real. Stay tuned!
Search on!
--
* Note: Thanks to GifMaker.me for the excellent GIF image comparison tool. It's super simple to use. Check it out when you next need to do a little forensics.