The past doesn't repeat itself,

... but it sometimes rhymes. (You could look up the attribution yourself, but no matter the answer, it's disputed.) 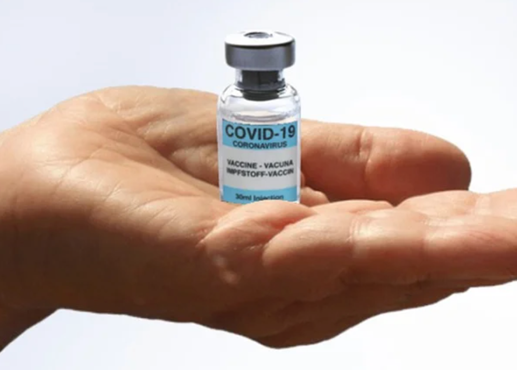 So let's revisit the Epidemic Rodeo and see what lessons we might take away from these Challenge questions that came up last week.

1. In the Swine Flu epidemic of 1976, a strange new device was used to quickly give many immunizations to a large number of people. (You'll know it when you find it.) What was that device, and why aren't we using it to rapidly immunize people with the COVID vaccine?

My query was straightforward:

Which gave a link to the CDC web page about the Swine Flu outbreak of 1976. In that page, there's an image of President Ford getting a regular injection, but there's also an image of a woman getting an injection from something that looks like a medical device from a science-fiction garage. It's described as a "jet injector," so my next query was:

which leads to a number of articles that describe the jet injector as a new piece of technology that would let thousands of immunizations to be given rapidly.

So why aren't jet injectors used everywhere, especially in these days when we need to immunize a LOT of people REALLY RAPIDLY?

The Wikipedia article about jet injectors tells us that the World Health Organization no longer recommends jet injectors for vaccination due to risks of disease transmission. That article goes into great detail about why jet injectors are at risk for cross-contamination and subject to the perversely named suck-back effect. "Fluid suck-back occurs when blood left on the nozzle of the jet injector is sucked back into the injector orifice, contaminating the next dose to be fired..." Not a great idea when you're unsure if the recipient has the disease or not!

Interesting tidbit: In 1936, Marshall Lockhart, an engineer, filed a patent for his idea of a jet injector after seeing similar devices. He called his gadget the hypospray. Thirty years later, Star Trek (TOS) series started to use its own medical jet injector device, also called "hypospray."

2. Can you find the first large scale program to immunize people from smallpox in the Americas? Who did it?

which led me to this fascinating timeline on the history of vaccination (by the The College of Physicians of Philadelphia). 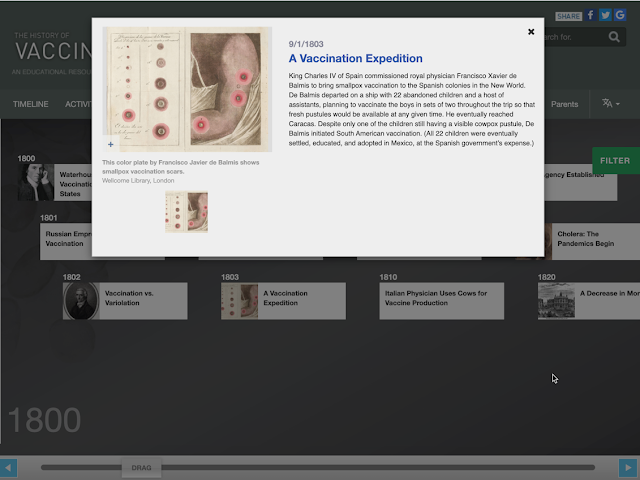 On this timeline, you can scrub back and forth and see a fairly complete list of the major historical vaccination efforts. It even includes the early (circa 1000 CE!) Chinese practices of variolation (that is, the deliberate inoculation of an uninfected person with the smallpox virus through contact with pustular matter.

If you look take the time to look through this extensive list, you'll find many early vaccination efforts (e.g., Cotton Mather's (1663-1728) smallpox variolations)...

But the first campaign or drive to immunize people in the Americas is clearly the 1803 expedition to the Americas by Francisco Xavier de Balmis.

"King Charles IV of Spain commissioned royal physician Francisco Xavier de Balmis to bring smallpox vaccination to the Spanish colonies in the New World. De Balmis departed on a ship with 22 abandoned children and a host of assistants, planning to vaccinate the boys in sets of two throughout the trip so that fresh pustules would be available at any given time. He eventually reached Caracas. Despite only one of the children still having a visible cowpox pustule, De Balmis initiated South American vaccination. (All 22 children were eventually settled, educated, and adopted in Mexico, at the Spanish government’s expense.)"

Not only do we now know the earliest mass vaccination campaign (1803) but also the answer to our next Challenge...

3. As we've learned, vaccine injectable materials often require special handling. The Pfizer vaccine requires a refrigeration between -80C and -60C. So, how was the smallpox vaccine transported in the answer to the previous question?

The somewhat remarkable answer is "in the bodies of 22 orphaned boys who were successively given the smallpox vaccine." And, even more amazing, only one of the boys had a useful pustule when they finally made it to Caracas. They came that close to not having transported the variolation material across the Atlantic.

This is such an amazing story that it just asks for verification and triangulation.

That's not hard to do. A quick search on the name:

leads to all kinds of high-quality sources about his life and the story of the expedition.

Realizing that the Spanish colonies were being devastated by epidemics of smallpox resulting in thousands of deaths, Charles IV, King of Spain, sent one of his court's physicians to apply the recently discovered vaccine. Without refrigeration, the vaccine was passed from one child to another (boys taken out of orphanages). Francisco Xavier de Balmis and a team that included three assistants, two surgeons, and three nurses sailed from Spain on November 30, 1803. They vaccinated more than 100,000 people from the Caribbean Islands and South, Central, and North America, reaching up to San Antonio, Texas, and then traveled to the Philippines, Macao, Canton, and Santa Elena Island, landing back in Cadiz on September 7, 1806. During his journey, Balmis instructed local physicians on how to prepare, preserve, and apply the vaccine, while collecting rare biologic specimens.

That's an amazing vaccination program for the early 19th century.

I couldn't find anything similar that took place before that time.

4. Yellow Fever epidemics have ravaged many places around the world forever. And while Yellow Fever used to be an enormous problem in New York, it isn't any more. Why not? Was it due to the success of the Yellow Fever vaccination program? Or what?

The New York History site tells me that YF finally was extirpated when NY got rid of standing water for mosquitos.

“More sanitary conditions and the draining of stagnant waters have largely decimated the mosquito populations that once plagued the city.”

The New York City data site tells us that there was a Yellow Fever epidemic from 1795 to 1804.

"Although yellow fever killed dozens of New Yorkers in the first year, people were reluctant to publicize the epidemic due to fear of business loss and of mass immigration away from New York. Doctors also didn’t initially realize yellow fever was spread by mosquitoes, many hypothesizing it began from rotting coffee or from poor sanitation in slums”

"Between 1668 and 1870 there were at least 25 outbreaks in New York, and there were devastating outbreaks in such cities as Philadelphia, Memphis, and Charleston. The New Orleans epidemic of 1898 involved almost 14,000 cases with 4000 deaths, whereas the epidemic in the lower Mississippi valley in 1878 resulted in 20,000 deaths and economic losses of almost $200 million."

So it wasn't clear WHAT was causing Yellow Fever. To find that, I did:

[ who found yellow fever cause ]

and learned from an article published in Bulletin de la Societe de pathologie exotique, Centenary of the discovery of yellow fever virus and its transmission by a mosquito (Cuba 1900-1901), that it was Walter Reed's commission about Yellow Fever that figured out it was a virus, carried by the Aedes aegypti mosquito that could transmit the disease. (Yes, THAT Walter Reed, for whom the large Army medical center in Washington DC is named).

If this mosquito is transmitting Yellow Fever, then the fix for Yellow Fever is to eliminate the mosquitos, which means removing stagnant pools of water where they can breed.

THAT led me to search for:

which gave me a lot of results, but mostly for present day pest controls... so, to limit it to historical information I modified the query to be:

which gives lots of results, but to find the ways in which they controlled yellow fever took some digging.

I finally found an authoritative paper "Yellow Fever Crusade: US Colonialism, Tropical Medicine, and the International Politics of Mosquito Control, 1900-1920." which tells us that once Walter Reed figured out that the Aedes aegypti mosquito was responsible, that led to a massive mosquito control effort in Cuba (which US forces occupied following the Spanish-American war). Remarkably, that effort (removing standing water or spraying oil on stagnant pools) reduced yellow fever deaths to ZERO in less than one year. This program was transferred to the Panama Canal project (which was being built at the same time) with equal success, completely changing the way people tried to control yellow fever.

Now I want to learn about the history of mosquito control efforts in New York:

which led me to a paper in the Journal of Urban Health, "The control of mosquito-borne diseases in New York City" and in there I found that:

"Mosquito control began in New York City in 1901. Large-scale efforts to drain marshlands occurred through the 1930s, and aerial application of pesticide occurred as early as 1956. Components of early mosquito-borne disease control were reimplemented in 1999-2000 in response to an outbreak of West Nile virus.."

Ah ha! We actually addressed this in an earlier SRS Challenge: What are those lines in the bay? when I wondered what made the lines I spotted from a plane landing at JFK airport. Those were mosquito control ditches. But they dug primarily in the 1930s. What happened before 1930?

A little farther down in that previous paper, we also find the answer:

In essence, the effort to control malarial mosquitos (which are Anopheles, not Aedes aegypti) had the fortunate side-effect of also controlling the yellow fever mosquitoes.

A vaccine for yellow fever wasn't developed until 1937, so it wasn't a mass vaccination program that saved the populace from yellow fever, it was simply a matter of getting rid of the mosquitos (although, as we saw earlier, that's not a minor effort!). It was a happy accident!

The lessons here are:

1. Sometimes historical searches need the term "history" in them. That seems simple enough--but it's often needed to remove results that are from current times (e.g., to get historically interesting results about the history of mosquito control, rather then just companies that are offering to do mosquito control for you).