Answer: Data for the Greek referendum?

Dan Russell • July 13, 2015
SearchReSearch
Republished with permission from SearchReSearch
Answer: Data for the Greek referendum? Dan Russell
This kind of question comes up all the time...

The Challenge for this week was pretty easy to state--the Challenge is all about the July 5th referendum in Greece about accepting (or rejecting) the proposed austerity measures for continued financial support to Greece from the EU. We know all this, but...

1. Can you find the OFFICIAL source of the vote data? (That is, the official government reporting on votes by precincts.)

2. Once you've found that data, can you graph or plot it in some way, voting-area by voting-area? (Ideally, we'd like to see if there were some regions of Greece that were especially Yes or especially No in their voting.)

Since I wanted data from the Greece government (and I don't know off-hand what the Greek government top-level domain name is), I tried just limiting my search to Greek sites with this query:

And THEN I limited my results to all those within the past month (I used the Search Tools pull-down option to do the date-restriction). This gave me a few good looking results: 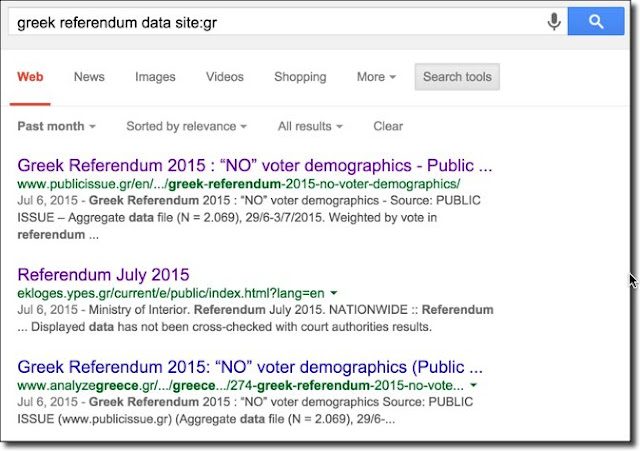 As you can see, this shows three different sites:

1. PublicIssue.gr -- you can check out their EN language "About" page and find out they're an opinion polling firm for Greece.

2. Ekloges.ypes.gr -- this is the Ministry of the Interior for Greece. (Probably a reputable source.)

3. AnalyzeGreece.gr -- which advertises itself as a news site about Greece, reporting from a "Left Politics" perspective. (It's nice to see a newsite that makes its perspective clear!)

Do these sources agree with each other?

PublicIssue reports that 61.3% voted no.

Ekloges (the Ministry of the Interior) reports that it was 61.31% no.

I was going to download the data and do some graphing, but a couple of additional clicks led me to the district-by-district map of voting results. 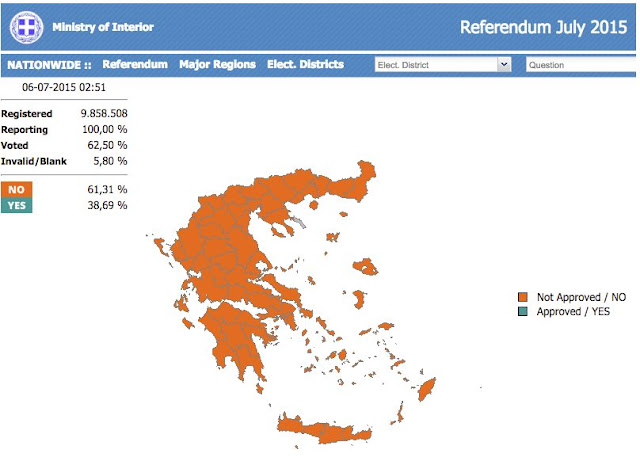 That's pretty much the final word in Greek voting for this referendum. It's the map by the government.

But then I noticed that ALL of the districts voted NO... except for that one little peninsula in the center of Northern Greece. What's up with that? Did anyone else notice this one region that seemed different? Here's a closeup (such as it is): 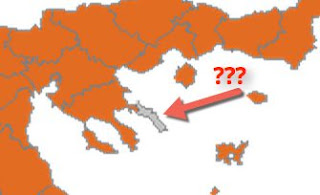 When I looked at the Ministry's data, I couldn't figure out which district that was. Odd.

I also found the Guardian newspaper's interactive voting map, and it also didn't register any votes.

My curiosity was piqued. So I flew to Google Maps, zoomed in on that part of Greece and was surprised to see a dashed line marking off this peninsula. As you can see, the dropped pin associates the name "Mt. Athos" with this region. 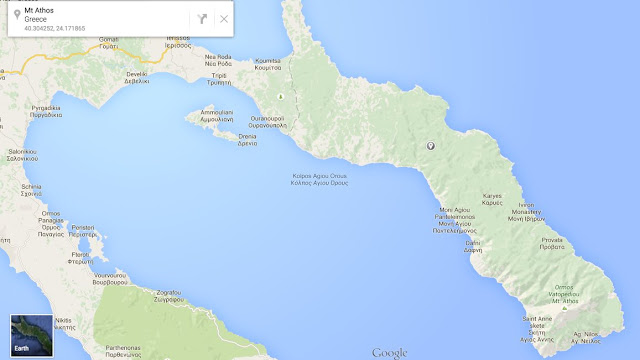 So... What is Mt. Athos? A quick search shows that it's a UNESCO designated World Heritage site, and is described as "An Orthodox spiritual centre since 1054, Mount Athos has enjoyed an autonomous statute since Byzantine times. The 'Holy Mountain', which is forbidden to women and children, is also a recognized artistic site. The layout of the monasteries (about 20 of which are presently inhabited by some 1,400 monks) had an influence as far afield as Russia, and its school of painting influenced the history of Orthodox art."

A bit more poking around and you can learn that the monasteries are reachable only by boat, and that only adult men can visit. It's a serious, serious monastic existence.

And they don't vote.

1. When searching for data from another country, a site: restriction can often save you a LOT of time. In this case, I got kind of lucky--the official Ministry of the Interior showed up in the second position.

2. Still, when looking for data, check around for alternative stories. In this case, every site agreed with the official data (but that's not always true!). Still, always check for consistency in the data.

3. Be sure you understand the bias of the sites. You saw that AnalyzeGreece.gr proudly describes itself as leftist. Not all sites do; sometimes you have to look at their written record to see where they're coming from (and take heed--sometimes a single source will have multiple writers with a variety of viewpoints, some right, some left, some from extreme positions--one writer doesn't (usually) define a news site's stance.

4. Sometimes clicking around on a site can save you a BUNCH of time and trouble. Just as I was about the scrape the data from the Ministry's website, I found their charts, which were exactly what I was seeking. Be sure you're not duplicating effort. A minute of clicking can save hours of your labor!

Thanks to all for everyone's hard work on this. And thanks again to Miguel for the idea.