...that was the Challenge. I gave a list of people (Galton, Da Vinci, Alberti, Goethe, von Humboldt, Pallas, Bernoulli...) and asked if you could find some more folks like this... That is,

1. Can you find more people like those above? They must be skilled in multiple arts / sciences / domains-of-expertise AND have left a record so we can tell what they were so good at doing. And just as importantly, HOW can you do a SearchReSearch strategy to identify these folks?

In some ways, the trick here like one of those SAT questions that asks "What's in common between these people?" As the question says, they're all "... skilled in multiple arts / sciences / domains-of-expertise..."
As a SearchResearcher, I approach this question as one of finding the correct category or type. What do you call these people?
More importantly, HOW would you figure out what these people are like?
To start my search, I just did the obvious search for the core of the idea taken from my Challenge statement. 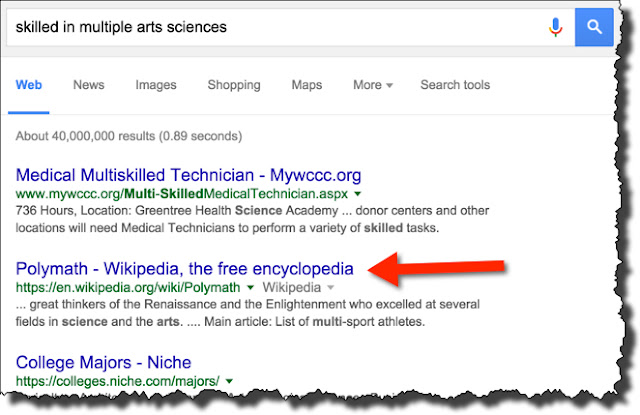 And I found a plausible word: polymath That sounds exactly right.

But I wanted to try a different approach as well, just to be sure that I hadn't missed some other terminology. 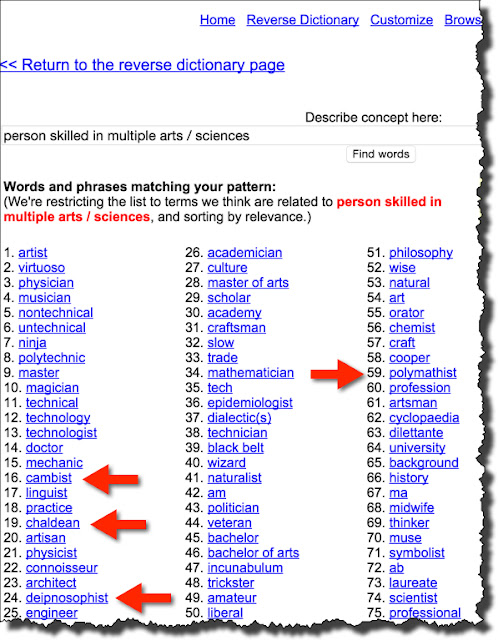 As you can see, polymath is there as well, but so are cambist, chaldean, and deipnosophist. (I looked up cambist and chaldean, and they're both off-topic.) But deipnosophist is fairly interesting. So I checked it out--could this be a possible word to use?

That's a great term to know (especially if you find yourself studying for an upcoming SAT exam), but it's more like a raconteur, and not quite in the same league as polymath. So I checked on the term--what really is a polymath: 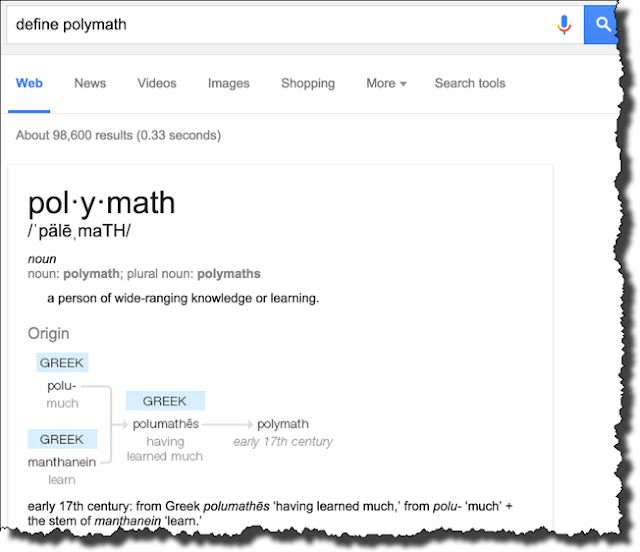 That sounds pretty decent. But I thought I'd do a quick check, just to be sure I'm on target here. My query [ Leonardo da Vinci polymath ] is intended to check to see if other people describe him as a polymath. Answer: They sure do! There are even images of Leonardo, the polymath. 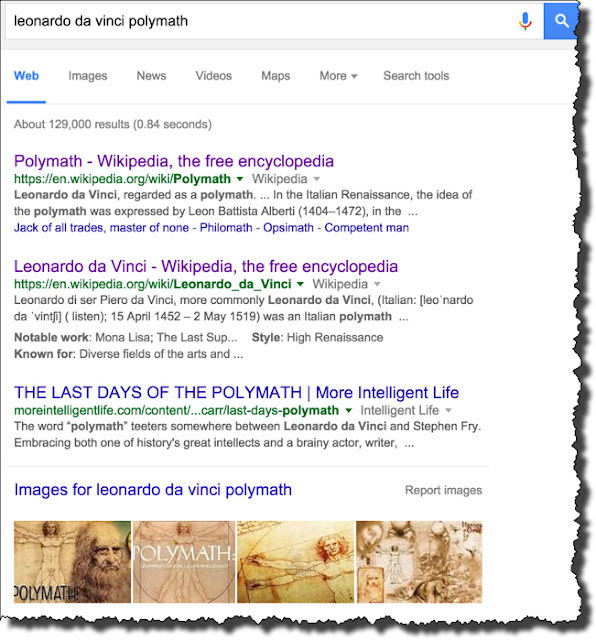 Now I want to find a bunch more people like Leonardo (or Alberti, or Goethe, or....).
The natural way to find this would be: 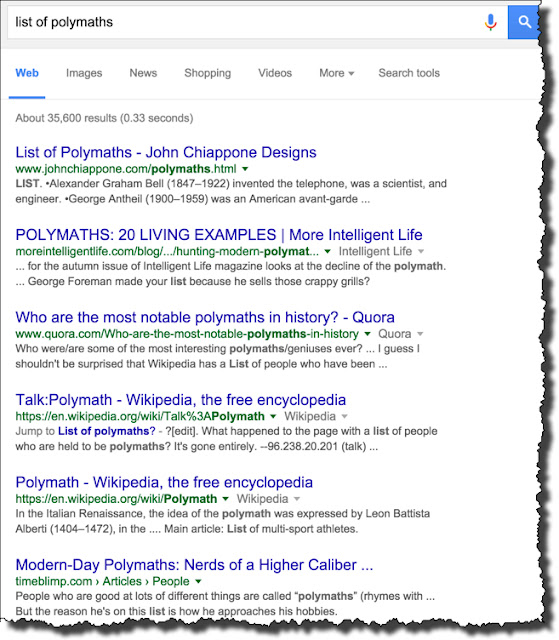 Which gives me a great collection to choose from. A quick skim shows me Charles Babbage, Charles Darwin, Thomas Jefferson, Galileo, Benjamin Franklin, Isaac Newton, and my personal favorite, (this week at least) Joseph Priestley.
Priestley was the18th-century English theologian, clergyman notable for his dissenting opinions, natural philosopher, chemist, educator, and Liberal political theorist who published over 150 works, many of which are significant. He is usually credited with the discovery of oxygen, but also gets my undying approval for having also invented soda water. He did it all--politics, theology, optics AND fizzy water for my afternoon repast. Oddly, I never knew (until I started writing this) that he lived the last 10 years of his life in Northumberland Pennsylvania (near Harrisburg). He turned down a faculty appointment at U. Penn, but he gave advice to Jefferson about how to set up a proper university (which Jefferson then used to establish the University of Virginia).
As I mentioned, there are many polymaths in the world, not necessarily dead, white, men.
The [ list of ...] trick works again: [ list of female polymaths ] gives us several wonderful lists, including Hypatia, Trotula of Salerno, Hildegard of Bingen, and Maria Gaetana Agnesi. You can keep changing the modifiers to find more. I used [ list of African polymaths ] and [ list of Indian polymaths ] etc etc.
With this kind of method, you can find people like:
A 16th century Ottoman polymath: Matrakçı Nasuh with a web page which includes the following surprising sentence: "...The most well-known episode of his engineering talent occurred during the circumcision ceremonies of Süleyman’s sons, Mehmed and Selim, when he famously constructed two moving citadels out of paper from which soldiers emerged and staged a battle, as part of the public spectacle and celebration in the Istanbul hippodrome (Yurdaydın, 144)."
George Washington Carver: the African-American botanist and inventor.
Cheikh Anta Diop: a Senegalese historian, anthropologist, physicist and politician.
And Ibn al-Haytham (Alhazen): an Iraqi scientist, physicist, anatomist, physician, psychologist, astronomer, engineer, inventor, mathematician, ophthalmologist, philosopher, and theologian.
All of these people are pretty amazing, and well worth the time to study. One common trait that's pretty obvious (in retrospect) is that they ALL wrote something that has survived the test of time.
A lesson for me: Get busy and write that book!
Search Lessons:
1. Even vague ideas can be captured in a single word (or short phrase)--the problem is to find that term. In this case, a 2-step strategy was the right one. First, find the word (or phrase) by describing the concept--".. skilled in multiple arts / sciences / domains-of-expertise..." and then scanning for a short term that captures exactly that idea.
2. The [ list of ... ] search pattern is remarkably useful. In this case, it found us "lists of" made by lots of different people. The insight here is that people love to make lists of things. The variety of lists I've found never ceases to amaze me. Remember this when you're looking for examples of a category, like non-Indo-European polymaths...
Search on! (And be sure to read the comments on the Challenge page--there are MANY more polymaths listed over there.)