Answer: Can science fiction stories be used to demonstrate prior art in patent cases?

Dan Russell • April 4, 2018
SearchReSearch
Republished with permission from SearchReSearch
Answer: Can science fiction stories be used to demonstrate prior art in patent cases? Dan Russell
How to find vague concepts?

Searching for something as vague or open-ended as this week's Challenge can be tough. How can we find examples of science fiction being used to invalidate patents?


As you remember, I wrote about "prior art" that was first shown in the film 2001: a space odyssey. (See the artwork for the movie above. Is that astronaut holding an iPad?)

This led to two Challenges--#1 is a specific question about a specific prior art, and #2 is the more general question.

1. Is it true that there was a lawsuit about iPad technology that claimed the movie 2001: a space odyssey as prior art?

This led to two Challenges--#1 is a specific question about a specific prior art, and #2 is the more general question.

My first query worked surprisingly well. I just did:

and found all kinds of hits to the Samsung / Apple lawsuit.

9to5Mac points out that Samsung presented a still frame from 2001 to illustrate that the design of the iPad was preceded by the "artwork" in the movie. 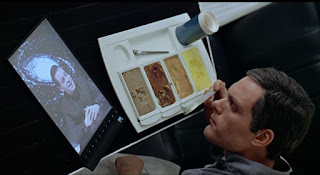 "...As with the design claimed by the D’889 Patent, [a design patent by Apple filed in 2005] the tablet disclosed in the clip has an overall rectangular shape with a dominant display screen, narrow borders, a predominately flat front surface, a flat back surface (which is evident because the tablets are lying flat on the table's surface), and a thin form factor."

The story here is that Apple filed a motion for a preliminary injunction to remove Samsung's devices (in particular, the Infuse 4G, Galaxy S 4G, the Droid Charge, and Galaxy Tab 10.1) from the US market. The claim is that these devices infringe on the 2005 design patent.

In order for a movie or a novel to qualify as “prior art” that disallows a patent (including a design patent) it must be “enabling.” This means that an average person skilled in the relevant art (industrial design, for example), could actually construct the device based on the fictional description. In this way, the transporter on “Star Trek” would not be considered prior art, because the series doesn’t detail how it works.

This is particularly interesting to me because when I worked at Apple research in the late 1990s, my team built a prototype of a flat tablet computer (with built-in Wifi, a camera, and a multitouch screen). We called it the Vademecum (Latin for a book that's always kept with you). It looked like this in 1994: 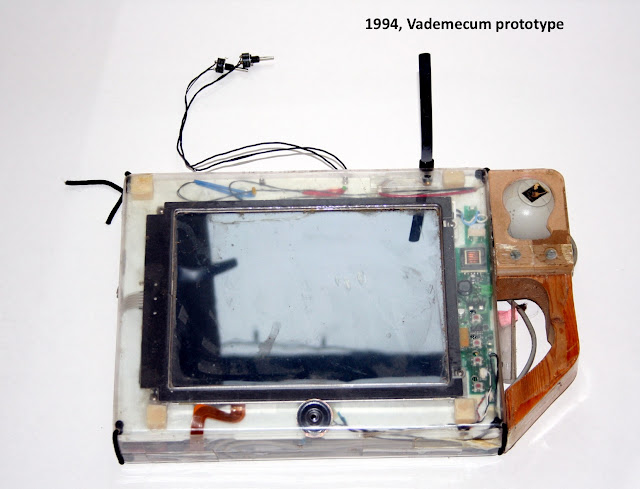 As you can see, we built a handle on the thing (so people wouldn't drop it), and mounted the movable camera on the corner. You can ignore those two potentiometers hanging out of the top on black wires, they were for testing.

This was an early prototype, so it's fairly thick and heavy... but you can see the direction we were heading. Towards an iPad-like device, as that's the natural direction for such gadgets.

Interestingly, we later discovered that in 1992, another group at Apple had created the Penlite tablet (which required a pen for touch, and had no camera or integrated Wifi): 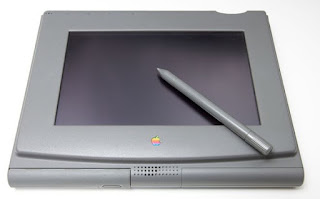 But in 1994, I was told that "there's no market for a tablet computer," and so Apple declined to go forward with it... at the time.

FWIW, we were also inspired by the multitouch tablet computers that were commonplace on Star Trek, the Original Series (TOS): 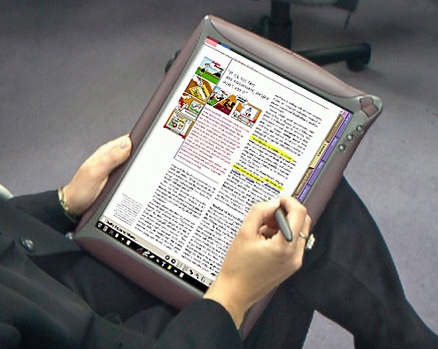 So, while the movie 2001: a space odyssey was used in the legal arguments, had the lawyers done a bit more of a search, they would have found all KINDS of prior art... within their own company.

In the final analysis, YES, the movie of 2001 was used in a patent lawsuit. (FWIW, if you do a Google Scholar search for [ Samsung Apple iPad 2002 film ] you can find that the preliminary injunction was denied on December 2, 2011, which is why you see all kinds of tablets on the market today.)

2. Have there been other lawsuits that have given similar arguments? (That is, that technology that was first drawn / filmed / written-about in science fiction invalidated a patent because it was prior art?) More generally, HOW would you search for such things?

This could be a bit more tricky: How can we do a decent search for this broad concept? (Science Fiction being used to invalidate patents in general)

My first search was for the two concepts in general:

I quoted them both because I wanted those two concepts as entities, and not just accidentally next to something else.

Somewhat to my surprise, this search led to a number of articles about the legal basis of artwork (especially science fiction) as prior art. To wit, the Ius mentis legal website says that ".. A patent cannot claim something that already exists, nor can it claim something obvious. To determine this, patent examination always involves looking for prior art, earlier publications that show the invention is not new or is obvious."

They go on to point out that any publication, in any form can qualify as prior art. Previous patents are usually used, but in fact, anything--newspaper articles, books, illustrations, movies (and presumably stone carvings)--can be used to demonstrate that someone could build the device given that prior demonstration.

Prior art must be enabling--that is what we found before: that an average person could, given that prior art, build the invention as described. Table computer, yes. Transporter, no.

With this fairly general search, I was able to find a couple of legal sites that agreed--SF could be used to invalidate inventions as prior art, so long as they could be implemented by an "average" person skilled in the arts.

So while there's some dispute about how much detail needs to be included in the depiction of the art, if that average Joe could figure it out without too much additional research, it will stand!

Here, the biggest lesson for me was how quickly we could go from something fairly vague, to some fairly detailed information.

In the query [ "science fiction" as "prior art" ] gave fairly quick access to an entire collection of useful documents and books that bridged the two topical areas. In the future, we'll have more examples like this--search Challenges that require linking two (or more!) vague concepts to get to something definite. Imagine finding the connections between any two random concepts... How would you do that? More soon!