Dan Russell • April 4, 2016
SearchReSearch
Republished with permission from SearchReSearch
Answer: Body modifications? Dan Russell
There are many ways...
... to change your body, some you want, some you might not care to have.
Working out to grow stronger and more muscled is one conscious way to modify your body, but last week's Challenge was to find a few answers to questions about bone & teeth modification!
In particular, I asked:

1. I've heard that people who habitually smoke a pipe have a distinctive pattern of wear on their teeth. Does that particular pattern of wear have a specific name? What is it?

2. Same question, except for people who are habitual sewers (that is, people who make clothes often). Do they have a particular pattern of wear in their teeth? What's that called?

3. Despite the difficult of bone modification, there is one bone that is (was) commonly modified by certain groups of people. What bone is that? How was it usually modified?

Let's take them one at a time:
1. Pipe smokers distinctive wear pattern? To begin this search, I started with:
[ pipe smoker teeth wear pattern ]
which quickly led me to find that yes, constantly clenching a pipe between teeth does lead to a distinctive "dental modification" pattern. By reading a bit of the text around the images, I learned that this is called a "pipe facet," which is the particular pattern of tooth wear from long-term pipe use. 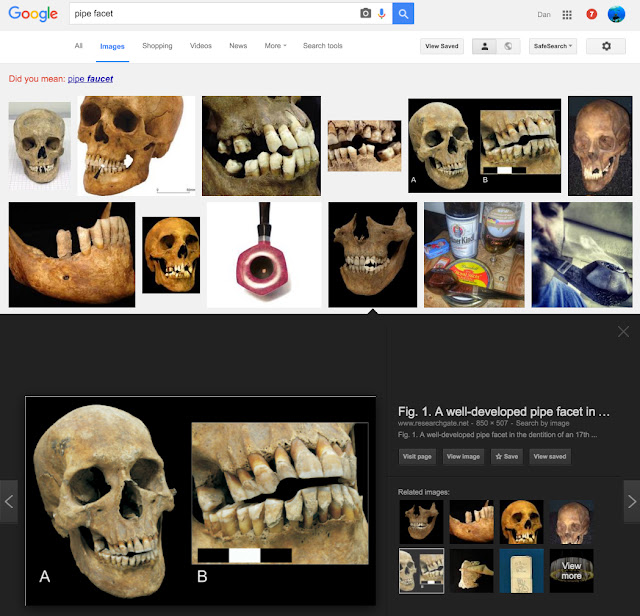 Lest you think this is only from the olden days, here's a side-by-side comparison:

Older pipe facets (such as that on the right) are more circular since early clay pipes had circular stem (and were made of relatively abrasive clay).
2. Habitual sewers distinctive wear pattern? For this, I did the search:
[ tailor AROUND(5) tooth ]
This was just about the only way I could find the answer I was seeking. I had to try many different combinations of search terms before I found this.
Why did I use "tailor" as a search term? Because it seemed to me that professional sewers--that is, "tailors"--would be more likely to have this than just regular hobbyist "sewers."
I used the AROUND(x) operator to find every document with the word "tailor" within 5 words of the term "tooth" -- this led to two web pages (BonesDontLie and a Washington Post article) that both used the phrase tailor's notch to describe a chip (or groove).
To validate this, I did a search for:
[ "tailor's notch" ]
(quoting it because I wanted exactly that phrase)... and found several descriptions of the particular tooth wear pattern of tailors, including a monograph from the Smithsonian, Human Remains from Voegtly Cemetery, Pittsburgh, Pennsylvania (Ubelaker and Jones, eds.), which documents an archaeological survey of a cemetery that was used between 1833 and 1861, with several tailor's notches noted in teeth. Here's one such image of a tooth with a clear tailor's notch on a front tooth: 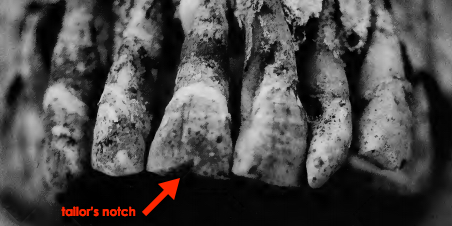 3. There is one bone that is (was) commonly modified by certain groups of people. What bone is that? How was it usually modified?
To answer this question, I did a bunch of guesses and found that all KINDS of bones that have modified by people over time--feet, neck, arms, heads... but my question is really a question about which bone was the most common, both in terms of numbers of individuals who modified this bone, and how many cultures modified these bones.
I initially did a query for:

and quickly learned that this covers a variety of modifications--both during life (antemortem) and after life (postmortem), as when bones are modified for ritual or tool-making purposes, or just plain altered by other effects (e.g., hyenas gnawing on bones).
But in reading through these search results, I found that the term "body modification" covers all kinds of alterations to the human body, including the ones that we care about here--intentional modifications to bone structure by different groups of people.
This lead me to the Wikipedia article on body modification (careful--it's pretty graphic and NSFW at the bottom of the page). But the article did highlight several bone modifications that are fairly widespread: footbinding, cranial deformation, neck elongation, and waist modification.
While waist modification (usually by the use of corsets) has been fairly common, it's been limited to the European migration (that is, any culture heavily influenced by Western fashion). Corsets and similar methods would change the shape of ribs and the waist overall.
Neck elongation is dramatic, but it's a fairly limited practice--primarily just to the Kayan people (a Tibeto-Burman ethnic minority of Myanmar, aka Burma). 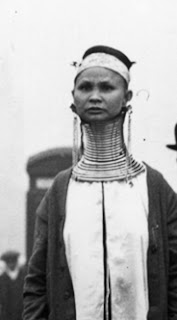 Footbinding is also amazing (and tragic), but again, it's a practice that's fairly limited to China.
However, changing the shape of the skull seems to have been practiced widely around the world. Certainly in Europe, Asia, North and South America, and the Pacific Islands.
The earliest written record of cranial deformation was by Hippocrates, who wrote about the Macrocephali (big-heads), who were named for their practice of cranial modification.
Until the early 1900s, a form of artificial cranial deformation was still taking place in Western France, in Deux-Sevres.
Earlier, in the Americas, the Maya, Inca, the Chinookan tribes of the Northwest and the Choctaw of the Southeast. While there are many ways to modify the skull, most methods, like that of the Choctaw, the Chehalis, and Nooksack Indians, were based on strapping the infant's head to a cradleboard to create a flattened head in front and in back.
This skull shape transformation was done by basically binding a child's head in with something that would change its shape as the child grew.
So while body modification practices of many kinds are widespread, the skull seems to be the bone (or, to be precise, several bones that interlock) that's most commonly modified--it certainly was a common practice among many different cultures.

1. Remember the AROUND operator. In my search for the "tailor's notch," I had to search for web pages that had the word "tailor" (as a synonym for "habitual sewer") that was near the word "tooth." This is the kind of search that AROUND is good for--finding co-locations of terms that describe a concept, but aren't necessarily next to each other. (Also really useful for finding names of people who appear in the same article e.g., [ "Marie Curie" AROUND(5) "Albert Einstein" ], which nicely locates the letter Einstein wrote to Marie Curie telling her to ignore the haters who were harassing her at the time.)
2. Consider using your own synonyms. While "habitual sewer" nicely describes what a tailor does, Google does quite know enough to use the term "tailor" as a substitute. This is why we had to use our own synonym, which captures the semantics quite nicely.

While I found this topic really very interesting, it's probably NOT a great topic for your K-12 classroom (unless you live in a very open and permissive scholastic environment).
When researching questions like this, you'll inevitably end up somewhere in body modification territory, and there's a lot of things that aren't really safe for work (NSFW), and, implicitly, NSFS either.
This reminds me that my general maxim for handing out research tasks is that you (the teacher) should really try to solve the problem BEFORE handing it out to your students.
OR (and I prefer this approach), teach your students how to handle questionable / salacious / gory materials. They're going to find them anyway--I feel that it's probably a better idea to give them some skills for dealing with the reality of content on the web than to just avoid the topic altogether. Give them a heads-up and let them know what to do once they find it!
And, as always.... Search on!