Answer: Are there seals in Tahiti?

Dan Russell • August 8, 2019
SearchReSearch
Republished with permission from SearchReSearch
Answer: Are there seals in Tahiti? Dan Russell
Okay... by now I'm almost back into
my Californian mindset...
... but our Challenge from last week still remains. Remember, I asked:
While there, I saw lots of wildlife. Such as this anemonefish I found on Raiatea,
1. Is it true there are no seals or sea lions in Tahiti? If so why not? (Or did I just miss them?)
How would you do online research for a question like this? Remember that doing an obvious query like:

is biasing the results towards ANYTHING that mentions seals or sea lions in Tahiti. (If you do this query, you'll find a sad story about a little seal who showed up in Raivavae in August, 2016. (Unfortunately, it was so far from home that it didn't survive.)

You'll also find lots of off-topic results about yachts that are named "Seal" or "Sea Lion" or yachts that have porthole seals that need maintenance, or hotels in Tahiti named "Seal" + something. But nothing useful.

You will find a spurious stock video of seals supposedly swimming in Moorea (an islan near Tahiti). It you look at that video closely, you'll see seaweed of a kind that clearly is NOT from Polynesia. (I suspect the video was just mistakenly tagged with that location at some point by a non-diving cataloger.)

I note that there's also a link to a book about The Quest and Occupation of Tahiti by Emissaries of Spain during the Years 1771 - 1776. This text has a few seal sightings in Tahiti and nearby islands, but the text also makes it clear these were pretty rare. Probably a bit like the unfortunate little seal on Raivavae--it was present, but not really intentionally, and certainly not happily.

So, what WOULD be a better search strategy?

Given that "seal" is a pretty generic term, perhaps we could find a synonym that's much more specific. The easiest way I know to do that is to check out the Wikipedia article on seals (or sea lions, or walruses...) where we learn that they're all members of the order Pinnipedia.

Now, armed with that bit of information, we can do a search for:

Naturally, this tends to give us books and scholarly articles about pinnipeds/seals, but that's okay, I'd like some authority in my reading on this topic.

And while I found a few articles, the most interesting one was a book chapter in Pinnipeds and El Niño: Responses to Environmental Stress. The entire book is about pinnipeds in the Pacific, and although I read much of the book (and importantly, used "Find in this book" feature), I couldn't find ANY pinnipeds except on the far Eastern Pacific, and the lower latitudes, near New Zealand and Antarctica.

That's kind a stumper. Now what? Is there another way to frame this Challenge?

I remember from other reading about birds and animals that the term "distribution" and/or "range" are often used to describe the locations where animals live. SO... I tried these searches:

This worked pretty well! Checking Images.Google.com I found that the second query is much better (higher quality on-topic results) and quickly leads to this map.


As you can see, pinnipeds are primarily cold water residents, with high population densities around the poles. Interestingly, the west coasts of North and South America are notable for their cold currents that skim along the shore. There are a few other outlier seal populations in the Mediterranean and Caspian sea. Generally speaking, the tropics are a seal-free zone! (Note, however, that blue streak in the middle of the Northern Pacific--that's Hawai'i, and a bit of a special case.)

The article mentions that:

Pinnipeds do not conform to the generalization that marine mammals are concentrated in tropical and temperate regions (Schipper et al. 2008), although they do occurprincipally within continental shelf regions (Fig. 1). They are for the most part coldwater animals that occur in regions with high marine productivity. Upwelling areas(including those associated with sea-ice edges and coastal shelf inclines) and oceanfrontal areas are focal points for foraging for many pinniped species. Additionally,available data on species distributions of pinniped do not appear to conform to themarine mammal generality that suggests that range sizes are smaller toward the poles(Schipper et al. 2008). Many arctic and antarctic pinnipeds have large, circumpolarranges, while most tropical and midlatitude pinnipeds appear to have more restrictedranges...

Generally speaking, with the single exception of monk seals in Hawai'i, seals and sea lions just don't live in tropical seas (unless there's a cold water current in the tropical latitudes).

So while there are seals in Hawai'i (the now rare and endangered Monk seal, Neomonachus schauinslandi), they are the rather exceptional exception to the general rule that seals don't live in the tropics.

Aside from the occasional strays who wander into Tahitian waters, there just aren't seals in the area!


2. (Extra credit) On board our ship I found this device. I'm not a big ship sailor, so I don't know what it is. Can you figure out what this is, and what it's used for on board? 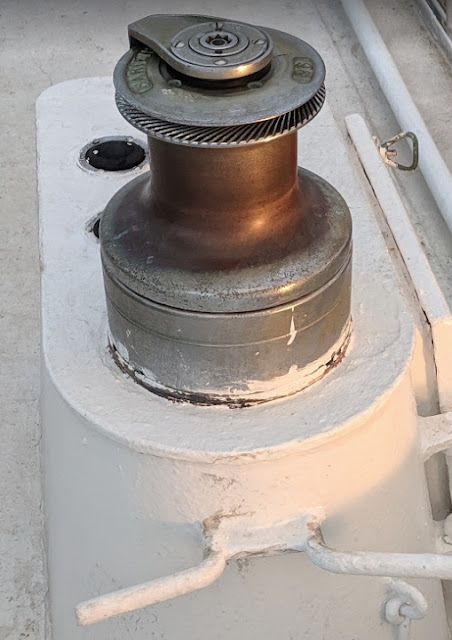 To start this search, I did a search-by-image, but that didn't work well, even after I tried using Bing's interactive cropping tool. I tried Google, I tried Bing, I tried Yandex... all to no avail. Nothing worked. It's just not a great Search-By-Image target image. (Too round, too generic...)

BUT.. remember that you can add search terms to the image AFTER you do the initial Search-By-Image. So, I modified the image search on Google by adding in the terms

To my delight, buried in the middle of this images I found something that looked a lot like what I was searching for... 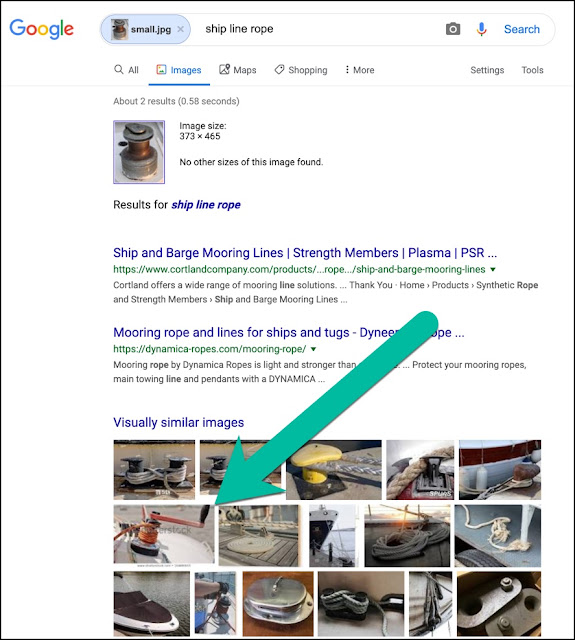 And when I opened up the image, I learned it was a winch.

Then, by looking up what a winch was, learned there are two kinds of devices like this... it's either a winch, or a capstan--both of which look very similar. (The difference is that a winch is only used to tighten or loosen a line, while a capstan can lock the line in place. You use a winch to raise/lower sails, but you can use a capstan to tie your boat to a mooring point.)

1. If you're getting junk results, try reformulating with a less-common term. We used "pinniped" which means "seals and related creatures, and that shift to a technical term eliminated all kinds of off-topic results.

2. Knowing domain specific terminology. Once again, using the right search term--in this case, "distribution" and "range" to find specific kinds of results--was an important change to our search. Sometimes you just have to know the language of the topic. I picked up these specific terms from my earlier reading about birds and animals. Turns out these terms work for seals as well.

3. Modify a Search-By-Image by adding in additional terms that will provide context. This is an incredibly useful thing to remember when you're searching for an ambiguous target. In today's search, we added "ship" and "line" and "rope" and found what we were looking for. (I added "ship" to find only things associated with ships, then I added "line" because that's a common nautical term for a kind of rope, and then finally "rope" to find images that might not use the word "line.") That series of modifications (3 searches) made all the difference!

Hope you found this Challenge interesting and fun! I learned a few new things about pinnipeds while reading for this topic... and was once again reminded that there's a great value in knowing the specific terminology for an area. Part of this is just the habit of reading widely, increasing your personal vocabulary.

Note that having a rich vocabulary is more than just knowing the definition of a term, but also knowing what domain (that is, a topic area) it's used in. Everyone knows the word "distribution," but you might not have thought about it as a way to describe the concept where-an-animal-lives. Luckily, I've read enough of those bird identification books to have seen "distribution" used in that way.