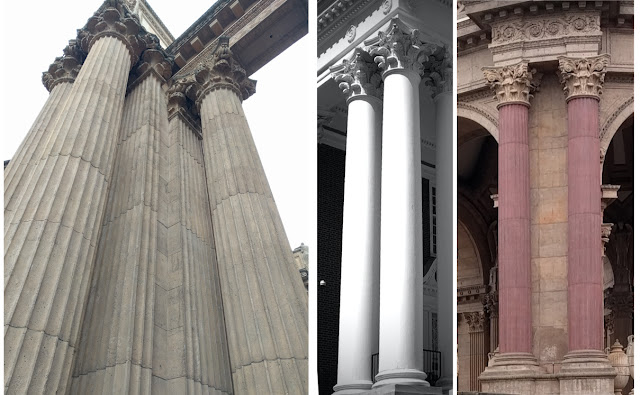 ... to understand what would make me smile when I saw this plant (below) growing at the base of these columns (above on the left) ... 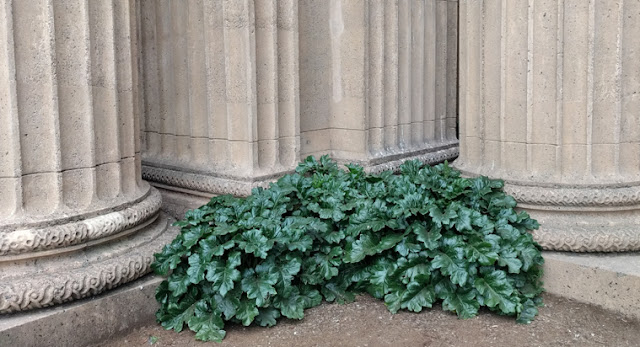 I asked the Challenge this way:

1. What about seeing this plant at the base of these columns made me smile? What's funny / odd / surprising about this little scene? (In other words, what's the connection between the plants and the columns? No, it's not that the plants are planted at the foot of the columns. It's much more obvious than that.)

For instance, if you start with the simple query:
[ plant column ]
about halfway down the results you'll see a result about a plant stand, but it will include the word acanthus.

Now, at this point in your research, you probably don't know what that word means, but as a researcher, you'll want to look it up.
This is the easiest way: [ define acanthus ]

Note the second definition! That's a connection to our search Challenge! An image search for acanthus shows you: 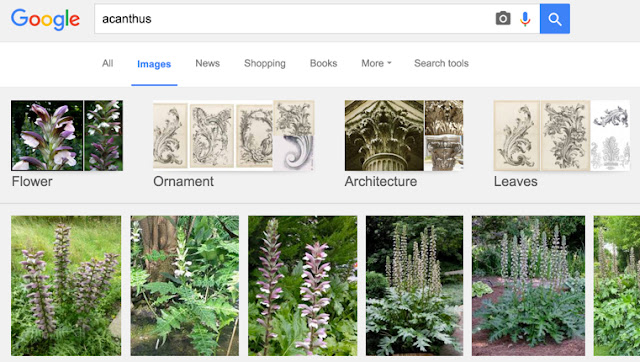 When looking for connections between ideas, a great way to start is with the most obvious query.

But since we know we're searching in an architectural context, I would add in the term architecture, do a search for:

But notice that I did NOT do a search for:

* [ plants at base of columns ] -- note: by convention, a leading * on the query
-- indicates that this is NOT a good query to
-- use for this Challenge
Why not?

Because while there might be plants that are commonly planted at the bottoms of columns, that's not what's of interest. Remember that the key observation was that this made me smile--that suggests that it's a little bit of a surprise, maybe something that's NOT common at the base of plants. This starred search would find the most common plants that live at column bases.

I chose that term because the Challenge explicitly mentioned that "I was thinking about architecture...," but more importantly, columns are architectural elements, and so I thought it would be a useful way to add context to the search. Look at this search below: 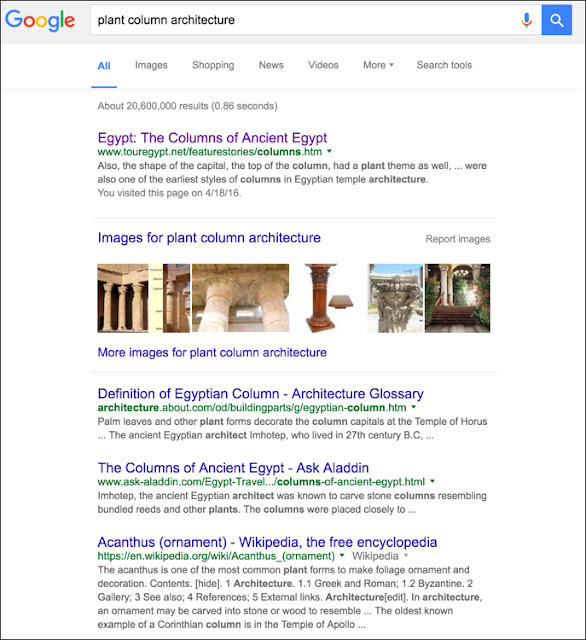 You can see that the first few results are for Egyptian columns. If you read those results a bit, you'll find that the plants sculpted into Egyptian columns are papyrus plants, which look very different than the leaves in the photo. Keep going a bit farther down, and ...
Again, you see the Acanthus result, and the connection between Acanthus (the plant) and acanthus (the top of the column).
IF, on the other hand, you recognize the columns as being Corinthian, your search could be:

By reading through the SERP, it doesn't take long to learn that there are leaves at the top of a Corinthian column are called acanthus leaves. Looking at the columns up close (which I assume you did!), you'll see that these carved leaves look a lot like the plants shown.

I confirmed this by searching for:
[ Corinthian column acanthus ]
and found a great deal of information confirming that in fact the acanthus IS the basis for the design of the leafy parts of the column.
The acanthus design dates to around 450 BCE. The oldest known Corinthian column is in the Temple of Apollo Epicurius at Bassae in Arcadia (now Greece).
Much later, the Roman writer Vitruvius (c. 75 BC – c. 15 BC) told the story that the Corinthian order may have been invented by Callimachus, a Greek architect and sculptor who was inspired by the sight of a votive basket left on young girl's grave. A square tile had been placed over the basket, and an acanthus plant had grown through the woven basket, forcing its leaves up through the basket, just as the top of column might be sculpted.
So why did it make me smile? Because it seemed like the acanthus plant was trying to grow to the top of the column--in essence, it was trying to get to the top... but it's not going to make it. It just seemed like an acanthus that was striving to reach the top, to where it thought it belonged.

We've studied the problem of finding connections between ideas before. (Connections between the flag and US History? Connections between people? Connections between amphorae and a Japanese biochemist?)
The key idea here is that you're exploring the concept connections between two different ideas. For this Challenge, it's how this random plant connects with these columns. So--how to do you this?
1. Start with a query that includes both concepts, and start looking for the connections. The trick here is to start with a pretty generic query that lists both concepts. and then start looking for links. As we saw above, it takes a bit of work, but can lead you to the results.
2. A great way to focus your "connection search" is to add a context term. In the solution above, we added the context term architecture. Think about context terms as the extra search terms that describe the general topic area; it's a way to reduce the confusion about how the terms might be used in multiple ways. Context terms are incredibly useful--use them well!

For teaching, finding connections is a great way to spark curiosity. One task that I sometimes give to students is to find a click-chain from one topic to another in Wikipedia. It's not quite the same as doing a search task, but it's a great deal of fun to try and find the shortest possible path from the Wikipedia entry on turquoise and oranges. Or, if you're going to follow the ideas in this blogpost, start at column and find a path to acanthus. (It's easy now, but if you haven't read this post, it's a bit tricky... and fun.)
Or, you could just try to find connections between historical figures or events. For a fun example, see my post about the connection between the phrase “The Myrtle of Venus with Bacchus's Vine” and.... defense by reason of insanity.
Finding connections is an important piece of making history come alive... and of making reading much more fun and interesting.
Have fun making up your question--and let me know if you find some great connections that we might use in a future Search Challenge!
Search on!