Answer (2): Time and date from a shadow?

Can you actually get the time and date from just a shadow? 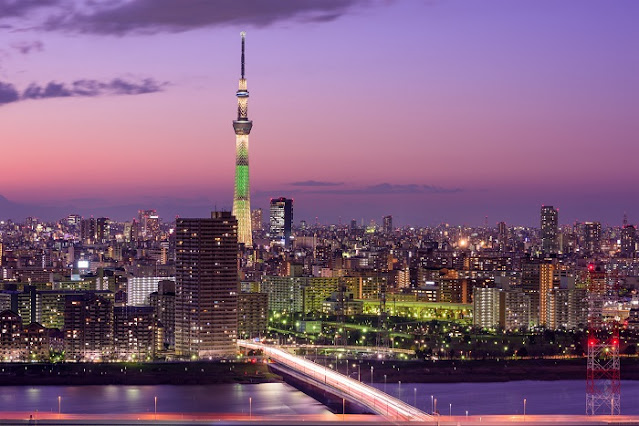 This is part 2 of the time&date from a shadow Challenge. In this post I talk about some of the workarounds I tried in order to get an accurate answer to the question. This is, in a sense, a record of my exploring various other ways to get to the answer. 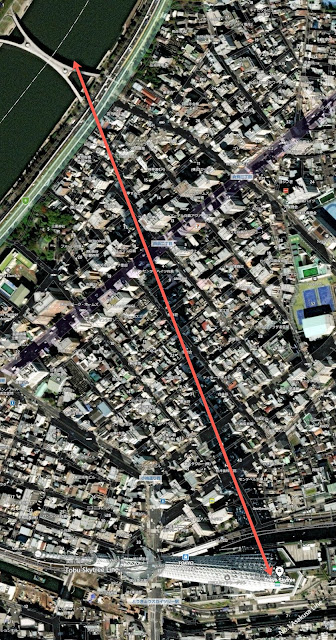 The Challenge I posed was:

1. What day and time-of-day was this photograph taken?

In our last post, I tried doing a bunch of math that I picked up from an Instructables page. It promised that if I knew the tower location and height, I could run the math and learn the time and date. But when I tried that, it didn't seem to work out--the math-based prediction didn't agree with

I used the SunCalc tool to see what they predict the shadow of the Skytree to be on March 21, 2020 at 8:21AM. But both SunCalc and the ShadowCalculator said that the shadow for that day would be about 300 degrees. (See the simple compass rose below to see why it's 300--just about due Northwest.) 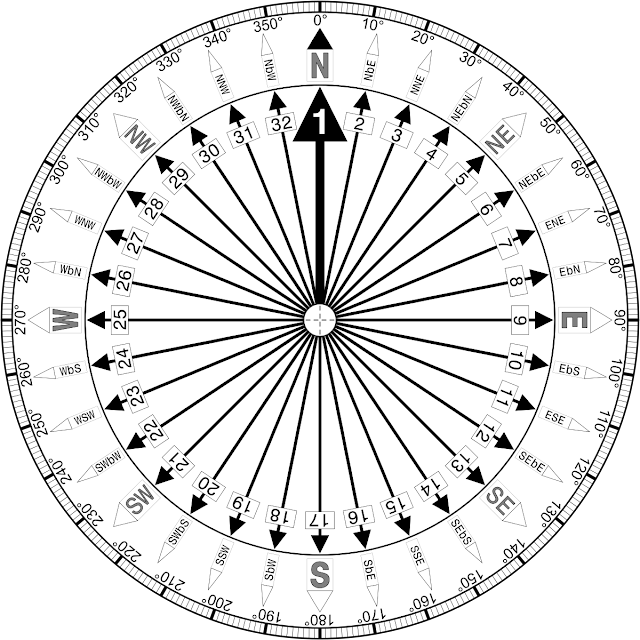 But 300 degrees is about 65 degrees off from the math model prediction... that's about as wrong as you can get, so something's very wrong. with either the model or my math.

When this kind of thing happens (and it happens a fair bit when doing online research) and nothing seems to be working, my fallback is to ask myself:

How ELSE could I find this information?

A couple of ideas came to mind...

Look for photos of the Skytree Tower with associated times and shadows so I can get some ground truth about what the shadows look like, when, and where.

Or... Search for a live webcam in the Skytree Tower area and use THAT as a source of timestamped images.

So... how can I find time stamped photos? Here's what I tried. Foreshadowing: None of these approaches worked!

A. Google Streetview: Here's a view of the Skytree from the Sumida bridge (which is where the tip of the shadow falls). GREAT IDEA... except you can't get the exact date or time. You can see the month and year shown at the very bottom of the image, but that's not quite precise enough. 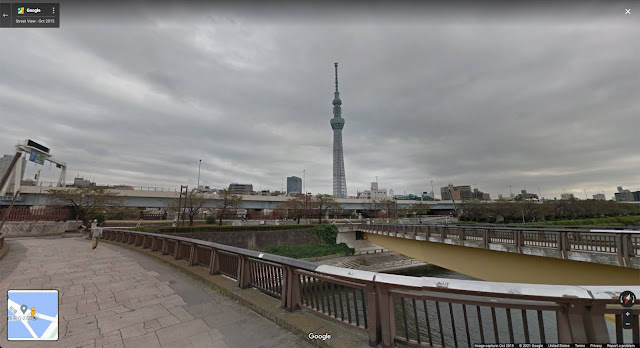 To make things worse, Tokyo seems to have a lot of cloudy days. I tried walking around in the Streetview to see if I could find anything good, but I couldn't. It was either cloudy OR the shadow I wanted to see wasn't visible.

B. Aerial images: Using a query like [Tokyo aerial images] it's easy to find lots of images, but many aren't at a high enough resolution, AND/OR they don't have a good time/date stamp.

C. Satellite images: It's fairly easy to find satellite images, but getting one at a high enough resolution was difficult. The Japanese Space Agency has lots of great image with decent time stamps (e.g. from the Himiwara satellite), but the resolution is low. Beautiful images, just not enough detail. (An aside: I suspect there are free high-res satellite images WITH time-date stamps, but I haven't found them yet. If anyone wants a sub-challenge, let me know!)

I spent a couple of hours searching, but didn't find anything good. In particular, I checked Google Earth, and there are good pix there, but there's no good way to get the TIME of the image.

D. Time lapse photos: Easy to find, but mostly of the Skytree as the sun sets, or at night. While artistic, I wasn't able to find anything that was helpful.

E. Amateur photos. Flickr (and similar amateur aggregator of pics) have great images. And while I mostly believe the date stamps from the EXIF metadata, I can't believe the time stamp (several of the ones I found were for 1AM, which obviously can't be right.. such as this one below:

HOWEVER... I had a realization:
By using SunCalc, then dialing in the date of the image (Jan 3, 2016 for the Graffsma photo) and then CLICKING and moving the time slider at the top of the page, I can see that shadow looks like it was being cast around 11AM (Tokyo time). Like this: 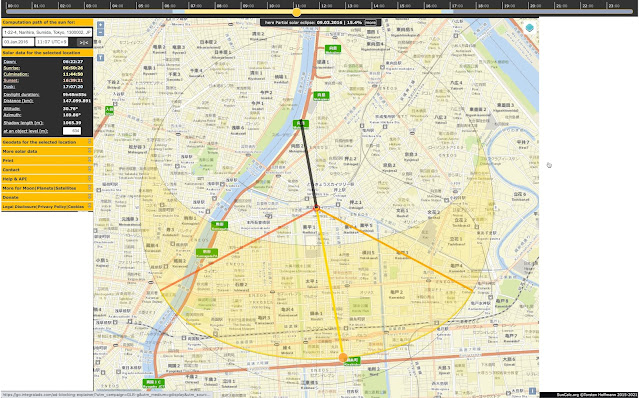 And THAT gives me an idea! What if I just explored with Suncalc until I found the date/time when the Skytree shadow would appear the same as in our image.... that is, where the tip of the shadow just crosses the Sumida bridge?
(I actually recommend doing this as a way to get a sense for how it all works--by changing the date and time, you can get a very good feeling for how the shadows move as the date and time changes.)
Here's what I found for Jan 29, 2020 at 10:42AM, a shadow model that looks just like our original photo:
And with even more playing around, you'll quickly realize that the shadow is in the same position on Nov 12, at 10:14AM.
With Suncalc, it's easy to vary the time, date, and year... by changing the year, I quickly find out that the shadow position varies a tiny amount. As this scale, I can't quite tell what year it is, but from other evidence, we can tell it's within the past couple of years.
Bottom Line: By using an online tool, you can search for a shadow that matches the one in the image!
Comment: The internet is full of such things--it's a Curiosity Cabinet full of marvelous inventions. But, as always, be sure to double and triple check.
In our next episode, I'll try some other tools to see if they cross-check.
AND... I'll keep working on the math formulas to see if I can't figure out what happened there.
Stay tuned for the exciting conclusion to our 3 part Search Challenge!
As always, I'm Searching On!