Announcement: A new version of PowerSearchingWithGoogle.com will open on Monday, July 20, 2015

Dan Russell • July 16, 2015
SearchReSearch
Republished with permission from SearchReSearch
Announcement: A new version of PowerSearchingWithGoogle.com will open on Monday, July 20, 2015 Dan Russell
As you know, 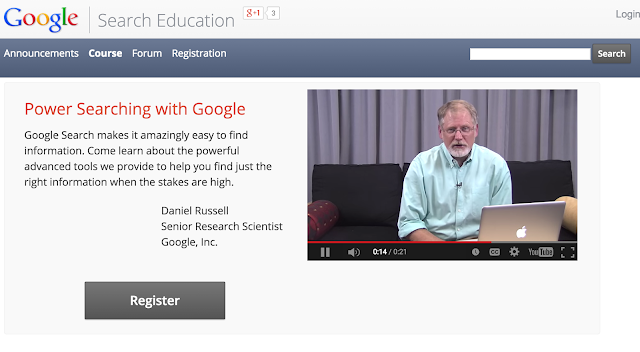 my MOOC ("Massive Open Online Course") called PowerSearchingWithGoogle.com has been fairly successful. We opened it a little over two years ago, and it's had a bit more than 600,000 students go through the materials.

I'm happy to say that we're launching a NEW and UPDATED version of the MOOC this coming Monday.

You can register now, and then proceed through the course at your own pace after it opens. I'll open the first half of the course on Monday, then the second half the following weekend.

This is what a we call a "soft launch" -- that is, the total number of students in this offering will be around 1000 or less. We're keeping the number intentionally low so we'll have the capacity to handle issues if / when / should they arise.

We'll then re-offer it in August and September (and probably forever more after that), but I'll be around to be a TA and answer your questions during the next 3 cycles of the class.

Now, if you're a regular reader, there's probably not much in the MOOC that will surprise you. Still, if you're a fan of SRS, you might consider checking it out. If you score well on the midterm and final, you'll get your own certificate of successful completion of the course (with your very own gold star)!

I'll be announcing the next several offerings when we get closer in time. (But think mid-August and mid-September for the next couple of classes.)

If you want to come along for the ride, register at PowerSearchingWithGoogle.com

Hope to see you online!